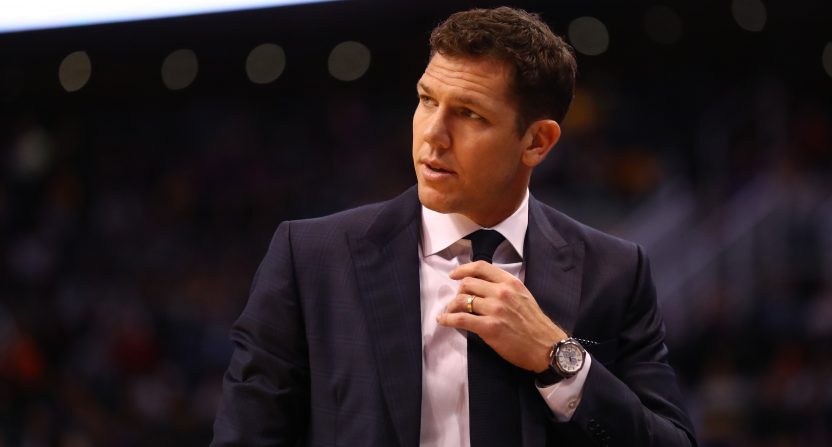 Last Monday, the Sacramento Kings hired Luke Walton to be their new head coach. The hope was that this could be a fresh start for the former Los Angeles Lakers head coach following his dismissal days earlier. However, there were alleged things in Walton’s past that were about to follow him to NorCal.

On Monday, former SportsNet LA reporter Kelli Tennant filed a lawsuit accusing Walton of sexually assaulting her during his stint as an assistant coach with the Golden State Warriors. According to the lawsuit, Walton had invited Tennant up to his hotel room in Santa Monica to discuss a book she had written (and he had provided the foreword for). Tennant then claims that when she arrived at the room to deliver a copy of the book, Walton “suddenly pinned her to the bed, placing his hips and legs over her body,” and “held her down, [and] groped her breasts and groin” after she screamed for him to stop.

TMZ, who initially reported the story,  said that Tennant “did not initially report Walton’s conduct but was forced to continually interact with him because of her job.” Tennant also said that Walton would “impose himself on her with a big hug or a kiss, even though she thought she made it clear his advances were unwanted” in interactions later on because of their professions.

The Kings released a statement Monday night, saying “We are aware of the report and are gathering additional information. We have no further comment at this time.”

On Tuesday, Tennant and her lawyers held a press conference to discuss the lawsuit and what she alleges. The details she shared are harrowing and disgusting.

#BREAKING #LukeWalton: #KelliTennant details allegations of sexual assault inside hotel room. She would go on to say she managed to leave the room. @NBA @Lakers @SacramentoKings @warriors @NBCLA. #MeToo. pic.twitter.com/qyfgptg8oO

Tennant added plenty of context to the initial news, saying that alleged sexual assault took place in 2014. She arrived at the hotel thinking they would speak in the lobby but Walton told her that they should go to his room instead. Then, “out of nowhere,” he pinned Tennant to the bed and started kissing her unwantedly. She added that when Walton grabbed her, Tennant begged him to let her go but he laughed at her and kept trying. She said that Walton held her down and rubbed his erection on her, continuing to laugh at her pleas to stop. However, she was finally able to get up and tried to leave the room but Walton allegedly grabbed her and started kissing her again. He finally relented and let her leave the hotel room.

"I thought he was going to rape me," Kelli Tennant says of sexual assault allegations against #LukeWalton

As for why she didn’t report the incident at the time to police or the Warriors’ organization, Tennant said, “I was 25 when this first happened. And as a young woman who had only been in this job for less than a year, I was incredibly grateful for where I was and had worked incredibly hard to get to that point, I was scared and I felt coming forward would jeopardize every aspect of my life.”

Tennant added that she never confronted Walton about what happened. However, the two interacted from time to time because of her job as an LA sports reporter, noting that Walton was “sure to hug me and kiss me on the cheek” every time they interacted.

It doesn’t sound as if there is any video or audio evidence to support the events of the alleged attack.

As for how Walton will respond, it sounds like he’s going to go on the offensive, at least according to his lawyer.

A statement from Luke Walton's attorney, Mark Baute, regarding sexual assault allegations: "Luke Walton retained me to defend him against these baseless allegations. The accuser is an opportunist, not a victim, & her claim is not credible. We intend to prove this in a courtroom."

It also sounds like the Kings are going to back Walton, albeit silently, until further notice. Per Sam Amick of The Athletic, Walton and GM Vlade Divac were working on hiring assistant coaches on Tuesday.

Meanwhile, the NBA is also taking a wait-and-see approach to the whole situation.

A statement from NBA spokesman Mike Bass on the allegations against Luke Walton: “We are coordinating with the Kings organization and are in the process of gathering more information.”

This situation certainly isn’t going away, and we no longer live in a world where claims like Tennant’s get brushed aside or passed over. The details she shared require a strong response and firm answer, and falling short in either regard could make a terrible situation even worse.