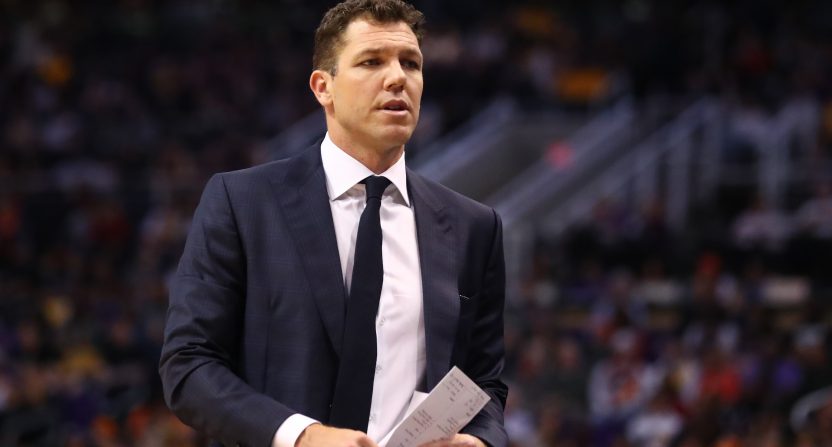 Kelli Tennant — a former Lakers and Dodgers reporter for SportsNet LA — has filed a lawsuit accusing Sacramento Kings head coach Luke Walton of sexually assaulting her, according to TMZ.

The Los Angeles Times’ Tania Ganguli confirmed the news, and added that the alleged incident took place while Walton was an assistant coach with the Golden State Warriors (he had that job from 2014-2016). The TMZ report had originally said May 2017 for the alleged assault date, but Ganguli reports that date is incorrect.

Can confirm Kelli Tenant filed a lawsuit accusing former Lakers coach, current Kings coach, Luke Walton of sexually assaulting her while he was an assistant with the Warriors. The Kings declined to comment saying only that they're aware of the report and are gathering information

No. The lawsuit very specifically says it happened while he was an assistant coach with the Warriors. May 2017 was a different interaction mentioned in the suit that Tenant says made her uncomfortable, not the alleged assault. https://t.co/pEgGxoY6CB

Walton was hired to be the Los Angeles Lakers’ head coach in April 2016, and kept the job until being fired earlier this month. Ganguli — a Lakers beat writer — reports that a Lakers source told her the organization was never informed of the allegations.

A Lakers source says that the allegations against Luke Walton, which were said to have happened before the Lakers hired him, were never reported to the Lakers, and consequently had no bearing on Walton's job status.

According to the legal documents obtained by TMZ, Walton invited Tennant up to his Santa Monica hotel room to discuss a book she wrote. Ganguli reports that the lawsuit says Walton was “a mentor” to Tennant and wrote a foreword for the book (which was reportedly published in 2014, before the alleged incident took place), so Tennant arrived at the hotel to give him a copy of the book.

In the lawsuit, Tennant claims that when she arrived at the room, Walton “suddenly pinned her to the bed, placing his hips and legs over her body,” and “held her down, [and] groped her breasts and groin” after she screamed for him to stop.

Here’s more on the lawsuit details, via TMZ:

In the suit, Tennant says when she arrived at Walton’s hotel, he convinced her to come up to his room so they could discuss the book. She claims when they got up to his room, Walton suddenly pinned her to the bed, placing his hips and legs over her body.

In the docs, Tennant claims Walton then began forcing kisses on her neck, face and chest. She claims she screamed for him to stop and tried to free herself, but he held her down, groped her breasts and groin, and rubbed his erection on her leg.

She says he eventually relented and let her get up from the bed, but as she was walking towards the door to leave he grabbed her from behind and again forced his body up against hers.

The TMZ report adds that Tennant “did not initially report Walton’s conduct but was forced to continually interact with him because of her job.” Tennant was a reporter for the Lakers and Dodgers on SportsNet LA for five seasons before leaving the network in late 2017. The lawsuit claims that when Tennant worked as a Lakers reporter while Walton was the team’s head coach, he “would impose himself on her with a big hug or a kiss, even though she thought she made it clear his advances were unwanted,” according to TMZ.

Since leaving SportsNet LA (now Spectrum SportsNet, formerly Time Warner SportsNet), Tennant has been a reporter for Amazon Prime’s AVP volleyball coverage and has a podcast.

Walton was hired as the Kings’ head coach on April 15. The Kings released a statement on Monday night in response to the sexual assault allegations:

The Kings have issued a statement regarding sexual assault allegations against their new coach, Luke Walton, as reported by TMZ.
"We are aware of the report and are gathering additional information. We have no further comment at this time."

“We are aware of the report and are gathering additional information. We have no further comment at this time.”