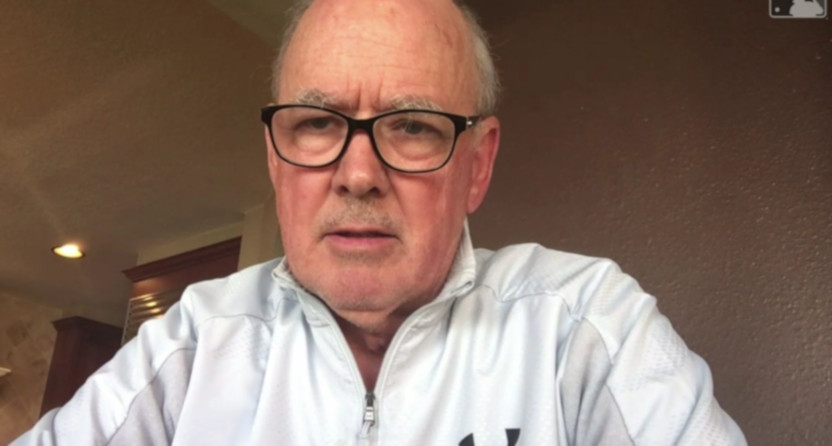 On Tuesday, the New York Mets fired newly-hired general manager Jared Porter for cause following an ESPN report from Jeff Passan and Mina Kimes Monday night about Porter’s past explicit texts to a female journalist in 2016 while he was working for the Chicago Cubs. That report indicated that Porter sent more than 60 texts to the journalist without a response, including repeated requests to meet him at a hotel and finishing with a photo of an erect penis. And on Tuesday, Mets’ president Sandy Alderson and (new) owner Steve Cohen both “independently decided” (according to Alderson’s remarks in a press conference Tuesday afternoon, as relayed by Ken Davidoff of The New York Post) to fire Porter for cause, meaning he won’t be paid for the four-year contract he had signed on for. But that press conference from Alderson contained an incredible amount of mammoth missteps, and it didn’t exactly provide much faith that the Mets’ organization has actually turned a page from all of its recent media–related embarrassments.

The biggest, and possibly most consequential, error here came from Alderson stating a crucial detail relating to the female journalist’s identity, which was deliberately not included in the ESPN story to prevent reprisals against her. Multiple reporters on the call tweeted about Alderson improperly providing this information. Granted, this was on a media conference call rather than in a publicly-available statement, so there’s still a chance that the information won’t actually get out to anyone who would use it improperly (and it’s not included in the Alderson video clip from that press conference that’s been made public at the top of the MLB.com story on this), but that’s still an incredibly problematic move. ESPN has that information and chose to omit it from their public report for obvious reasons; while the Mets obviously have that information too, they should not be relaying that to even a group of journalists who were not the ones who reported this story.

Another key element here that doesn’t look good came from Alderson’s remarks on the statement the Mets sent out last night when this story broke. Here is that statement, via Tim Britton of The Athletic:

The timing here is quite important. Britton tweeted that statement at 11:26 p.m. Eastern, and appears to have been the first one to do so. Passan tweeted ESPN’s story on this at 11:04 p.m. Eastern:

New York Mets general manager Jared Porter sent explicit photos, including a naked picture of a penis, to a foreign female reporter in 2016 after she had ignored dozens of other messages from him for weeks.

Details in news story with @minakimes at ESPN: https://t.co/gAOzQlTeAf

If that statement was to ESPN in response to general questions about Porter’s behavior before they actually published their story, that would be perhaps more understandable (and the “your story” does make it seem that that’s how this started). If the Mets did not have all the information in the ESPN story until that information was published, a “we do not condone” and “we will follow up” statement to the outlet running that story for its initial publication makes sense. But the execution here meant something different; that was a statement the Mets sent to the entire media that covers them, and one they sent out at least 20 minutes after ESPN’s story went live. But Alderson confirmed in his press conference Tuesday that it was largely written before they saw the details of the ESPN story, as Davidoff notes:

Q: Alderson’s initial statement on Monday night, which cited Porter’s contrition and long-ago apology, seemed a little tame. What was up with that?

A: Alderson explained that he and the Mets crafted that statement based primarily on what Porter had told them and before they actually read and watched the ESPN story. Once they saw the “full breadth” of the piece, Alderson said, he and Cohen independently determined that they had to terminate Porter. They notified him at about 7:30 on Tuesday morning.

That particular timing seems incredibly bad. As mentioned, a “We’re investigating” would have been more logical if it was a response to ESPN before they ran their story. Or it might even have been possible to go with only that if it went live immediately after ESPN’s publication, and if it explicitly said “This is based on the information we had before ESPN published this; we will analyze the published report in full and announce further actions tomorrow.” That wouldn’t have been a great move, as there still would have been questions about why they couldn’t react to the published material in a reasonable amount of time, but it at least wouldn’t have furthered the idea their actual statement gave, which was that they just “take these matters seriously” but were not committing to any actual action. And that statement got them absolutely roasted Monday night. If that was all they were willing to say publicly until Tuesday, it might have been better to just leave that as a pre-publication statement sent to ESPN rather than a statement sent widely after ESPN’s publication.

There is some minor sympathy here for the time zone involved, but it doesn’t explain everything. Yes, this story was published after 11 p.m. Eastern, and it’s maybe understandable why Alderson didn’t immediately call Cohen and why they didn’t both decide on a firing at that hour. (Although, that probably would have worked out better for them, and if there ever was a “wake the owner up!” moment, it’s this.) But the Mets were not ambushed here; they were given advance notice by ESPN that a story was coming, which led to them talking to Porter and generating that poor initial statement largely in advance of ESPN’s publication of the story. And it certainly would seem smarter for both Cohen and Alderson, knowing that a significant story like this is coming, to read it in detail as soon as it is published and then decide how to respond then, even if it means them (and their PR department, who doubtless did the bulk of the work of actually writing this statement) staying up a little later than normal and putting out an actual response Monday night.

But even no response (beyond the pre-publication one sent to ESPN) Monday night would have been better than what the Mets actually did. The timing of their statement, more than 20 minutes after the story’s publication, gave the impression that it was a statement made with the knowledge of all that was in that story. And as such, it was perceived as a totally inadequate reaction. And if Alderson and Cohen both believed that they had to terminate Porter after seeing what was in that story, they should either have announced that immediately after viewing the story, or not fully responded to the story until Tuesday morning. Their half-hearted approach gave the impression that they were considering with less-than-firing punishments here even after seeing the story and only changed their tune after seeing the ferocity of the public response. And if that wasn’t actually the case (which is what Alderson said Tuesday), they did a horrible job of presenting their actual reaction.

One other incredible blunder here comes from Alderson’s comments on the Mets’ vetting of Porter. Here are those, as relayed by Yahoo Sports’ Hannah Keyser:

Sandy Alderson said they got all glowing reviews of character in interview process with Jared Porter. So I asked if they consulted any women. He said no.

Sandy Alderson has worked in Major League Baseball since 1981, when he started as the Oakland Athletics’ general counsel. He became their GM in 1983 and held that role through 1997, then became MLB’s national executive president for baseball operations from 1998 to 2005, then worked as the San Diego Padres’ CEO from 2005-09, then as the Mets’ GM from 2010-18, then as an A’s advisor in 2019, then as the Mets’ team president from last September on. He has spent almost four decades in Major League Baseball, and in that time, he has certainly come across female reporters’ repeated stories of harassment from players, coaches and executives. While Porter’s particular behavior is exceptionally terrible and disqualifying, behavior along these lines has been going on for decades. Here are a couple of pieces from female reporters and columnists that exemplify that:

For many, Porter’s outrageous behavior may seem unthinkable, being so far removed from their everyday experience. For women who work in professional environments like baseball, Porter’s methodology was familiar, if extreme. For me, it hit home.

Don’t tell me this was isolated. On Jared Porter, pervasive problems and a system with no recourse. https://t.co/nfnJzUtBzJ

Sports executives sexually harassing women, whether media members or team employees, is a well–known problem. And those pieces illustrate why Alderson’s comment of getting all “glowing reviews” on Porter was incredibly flawed considering that the team did not ask a single woman about him and his character. So they asked his male coworkers what his character was like, and they responded that it was fine. And boy, that sure shows a huge flaw in many professional sports teams’ approaches to hiring.

In the end, the Mets came around to the right decision here. Retaining Porter after this story would have been incredibly bad. But they definitely messed up their response here, and made themselves again look unnecessarily foolish in the process. And Alderson’s press conference raises a lot of questions about if the organization will actually learn the needed lessons from this story.