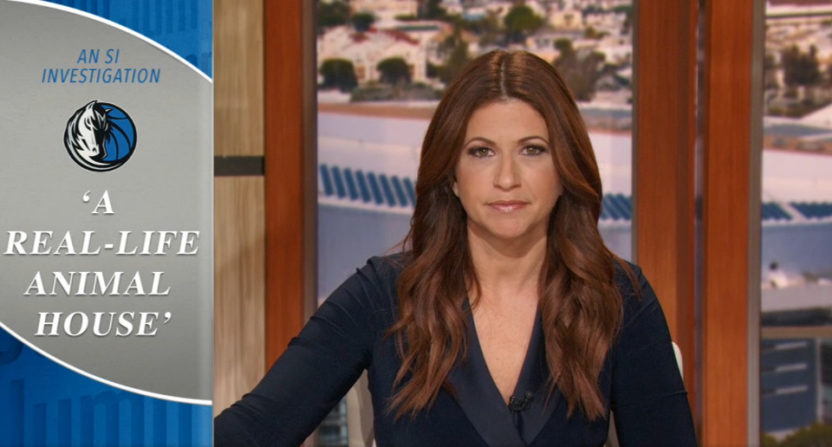 Sports Illustrated‘s bombshell story Tuesday night on the Dallas Mavericks’ “corrosive workplace culture” included allegations of serial sexual harassment against former team president Terdema Ussery, plus discussion of how the Mavericks kept employing Mavs.com beat writer Earl K. Sneed until Tuesday. That was after Sneed pled guilty to misdemeanor assault in a 2012 case of domestic violence and was accused of a second instance of domestic violence by another Mavericks’ employee in 2014.

The team’s response to this has taken a lot of criticism, and some of the strongest has come from ESPN’s Rachel Nichols, who first weighed in on it on Twitter Tuesday:

The Mavericks employee who pled guilty to beating his girlfriend & then reportedly hit another woman *who worked for the team* gives statement to @DallasNews saying it’s OK the team kept him employed bc they had him sign a contract saying he wouldn’t be alone w/female staffers. pic.twitter.com/wphbXPu1O8

YOU HAVE GOT TO BE KIDDING ME. https://t.co/BEjG62aWjG

I believe the phrase you're looking for is "institutional failure "

Oh I have a LOT of phrases right now, but most of them are not Twitter-language appropriate. I’m going to have to get a thesaurus before I go on TV for The Jump tomorrow. https://t.co/fOsuDLkCHW

Nichols then went in on this hard on her ESPN show The Jump Wednesday:

Some of the notable commentary there includes Nichols saying Ussery’s comments of “I am not aware of any sexual harassment complaints about me” are “actually just a flat-out lie” (1:57) given the six-week internal investigation of him in 1998, and her commentary at 2:43 about what this means for the organization.

“And that’s really the key here. Are you a business that’s okay with this kind of stuff, or aren’t you? With the Mavericks, the problem does seem to be institutional, especially when you consider what happened with another team employee, Earl Sneed.”

Nichols then dives into the SI report’s revelations about Sneed, and particularly blasts their decision to keep him after the second incident (3:28):

“Again, the team didn’t fire Sneed. Instead, and this is truly jaw-dropping, Sneed tells The Dallas Morning News this is all okay because the team had him sign a contract promising he’d no longer have one-on-one fraternization with any female employees. You’ve got to be kidding me. Think about what message that sends to every woman in the office. This guy can hit one of you, and we are going to keep him around and make you continue to see him every day and work with him. And that’s just the women inside the team who knew what was going on. Sneed had a job where he’d work with the Mavericks on road trips, coming into work and travel situations with any number of women who work with the NBA who had no idea they were hanging out with a man who had repeatedly turned violent.”

After that, Nichols goes on to detail Mavericks’ owner Mark Cuban’s response, including firing Sneed and saying keeping him employed “was a horrible mistake in hindsight,” dodging questions on Ussery, and bringing in an outside law firm led by a former New York prosecutor for an investigation.  She isn’t convinced that will solve the issue (5:05):

“The Mavericks should get credit for hiring someone with a strong ethical reputation, but there’s still plenty of questions here, because how independent is this investigation when the Mavericks are hiring someone versus the NBA itself? Will the report be public? And if so, who from the team or the league will get their hands on editing it or getting out in front of it before it is released?”

“And how does a man like Mark Cuban, who repeatedly brags about how hands-on he is as an owner, who last year if you’ll remember, got involved in the minutiae of counting the number of games team beat writers attended when deciding how to hand out credentials, say that he never knew any of the stories that it took a couple of reporters just a few months to collect? And if he really didn’t know about that situation that was clearly so pervasive, what does that say, and how many other teams have issues like this we haven’t heard about yet? The answers here won’t be easy, but we need to find them, because this game is too good, this sport is too good, this league is too good, to let something this bad continue.”

That’s a strong commentary from Nichols, and she raises a lot of valid questions. We’ll see how Cuban and the Mavericks answer those going forward.