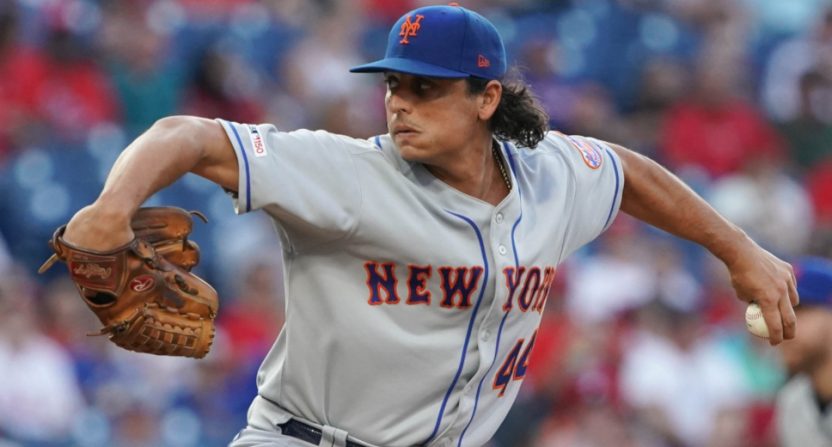 The New York Mets saw some significant drama this week, with manager Mickey Callaway going on an obscene rant against Newsday reporter Tim Healey after a loss to the Chicago Cubs Sunday and pitcher Jason Vargas then threatening Healey with “I’ll knock you the f*** out, bro.” The team quickly sent a statement of apology, owner Jeff Wilpon apologized publicly and personally, GM Brodie Van Wagenen apologized further Monday and fined both Callaway and Vargas, and Callaway clarified late Monday that he’d apologized to Healey (after previously refusing to comment on that and defending his rant as “part of the game“).

But Vargas only gave a brief statement that didn’t involve an apology, and during his next start Wednesday against the Philadelphia Phillies, he took criticism from an unlikely source: SNY broadcasters Gary Cohen and Keith Hernandez. Here’s video of their conversation as Vargas (seen above during that game) returned to the mound for the bottom of the third inning, via @Huerts31 on Twitter:

Here’s a transcription of that from The Athletic’s Mets beat writer Tim Britton (click the tweet to see larger versions of it):

Here's the conversation between Gary Cohen and Keith Hernandez in the bottom of the third inning about Jason Vargas on SNY: pic.twitter.com/GPU7YEDYuh

Those are some strong criticisms of Vargas’ behavior from Cohen and Hernandez, and stronger than you usually see on a team broadcast. And they received praise from other media members, notably ESPN New York radio personality and Yankees’ TV broadcaster Michael Kay:

.@Mets broadcaster, Gary Cohen, is a stud. Right now on @SNYtv he took Jason Vargas to task for his altercation in Chicago and for not apologizing to Tim Healey. Cohen showing no fear of any ramifications from Vargas or team. Saying what’s right. Awesome.

It’s also interesting to see that coming while Vargas is on the mound. He wound up going six-and-a-third innings and allowing three hits and two runs, but the bigger story here may be the criticisms of his clubhouse behavior from the team broadcasters. We’ve previously seen players confront team broadcasters over on-air criticism, particularly David Price with Red Sox broadcaster Dennis Eckersley back in 2017, and we’ll see if anything of that sort happens here.