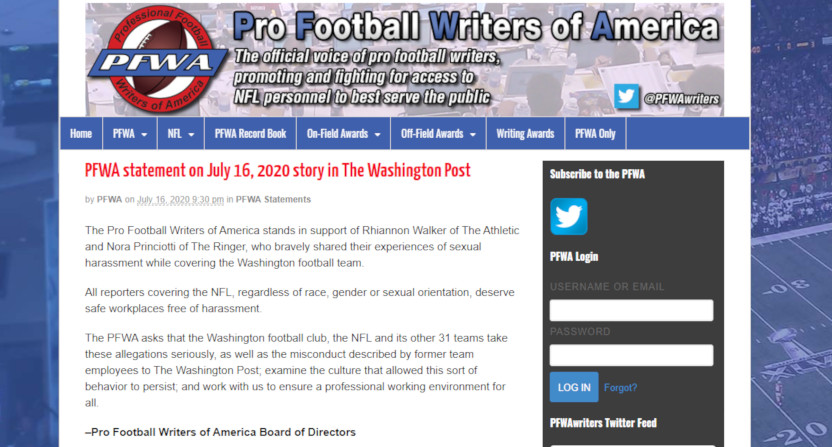 And those stories came not just from those who worked for the team, but also from female journalists who covered the team, specifically Rhiannon Walker of The Athletic and Nora Princiotti of The Ringer. (Walker further detailed her experiences in a first-person piece at The Athletic Friday.) That led to the Pro Football Writers of America (a cross-outlet media organization that plays an important role in coverage of the NFL, including fighting for strong access policies) releasing a statement calling for the team, the league, and the league’s other teams to work to prevent harassment of reporters. That statement from their site can be seen above; they also released it on Twitter.

A statement from the Pro Football Writers of America: pic.twitter.com/91zVeTn7NM

There have been many stories across sports over the years of female reporters and broadcasters experiencing sexual harassment on the job, including at the NFL Network. The Post story is another example of this continuing to happen in the NFL, and another illustration of how large a problem it remains. And with that in mind, it’s positive to see a statement like this from the PFWA.

Sport-specific journalist associations have often been very effective in pushing for improvements to media working conditions in their sports, which is why we’ve seen them spring up even in newer sports. And the PFWA’s cross-outlet status and their large membership numbers make them an important part of any discussion about NFL media policies. So it’s good to see them getting involved in this particular conversation.

The PFWA may also be a key element to the reform discussion here. Internal changes in the Washington organization to protect employees there are important and necessary, but further changes still may be necessary to improve things for outside reporters. Outside reporters don’t work for the team and don’t have the same internal channels to lodge complaints, so reforms that help internally may not be enough to protect those who don’t work for the team.

Of course, there are some existing channels. Outside reporters can take complaints against an external organization to their own organization’s leadership and/or HR department and have them bring it up with the team, or they can try reporting issues with an external organization’s employee to that organization’s HR department. But those approaches don’t always work, and they can lead to fears of retaliation. (It’s notable that Walker did bring her complaints about Santos to her bosses and The Athletic’s legal department, and they brought them up with the team, but that doesn’t appear to have led to much internal discipline before this week’s firing of Santos.) So it feels like some further change could be implemented here.

As for what exactly that looks like, that’s not clear at the moment. But journalist associations have played a valuable role in pushing for workplace reforms in the past, and they may do so again here. With the PFWA on the record calling for change, that’s further pressure on the Washington NFL team and the NFL as a whole to seriously address this and work to prevent future harassment, both of internal employees and external reporters.

For the record, the NFL put out their own statement Friday morning (after drawing notice for a lack of response Thursday):

“These matters as reported are serious, disturbing and contrary to the NFL’s values. Everyone in the NFL has the right to work in an environment free from any and all forms of harassment. Washington has engaged outside counsel to conduct a thorough investigation into these allegations. The club has pledged that it will give its full cooperation to the investigator and we expect the club and all employees to do so. We will meet with the attorneys upon the conclusion of their investigation and take any action based on their findings.”

“The behavior described in yesterday’s Washington Post article has no place in our franchise or society,” Snyder said. “This story has strengthened my commitment to setting a new culture and standard for our team, a process that began with the hiring of Coach Rivera earlier this year. Beth Wilkinson and her firm are empowered to do a full, unbiased investigation and make any and all requisite recommendations. Upon completion of her work, we will institute new policies and procedures and strengthen our human resources infrastructure to not only avoid these issues in the future but most importantly create a team culture that is respectful and inclusive of all.”

Of course, statements are easy, and actual change is harder. We’ll see what those statements actually lead to. But the chances of tangible change seem higher if media members are pushing for reform. And a push from an organization like the PFWA may help there.