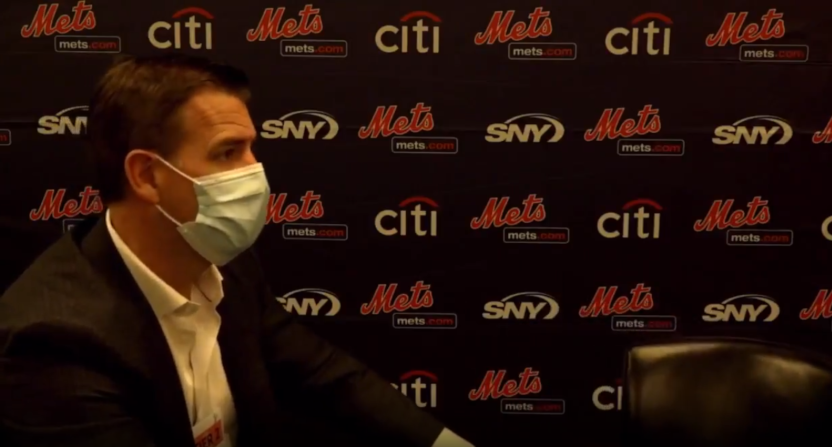 The New York Mets have long been renowned for “Metsing,” or finding incredible ways to shoot themselves in the foot (perhaps even in the hand, foot and mouth). Well, Thursday saw their Metsing impact all of Major League Baseball. Mets’ GM Brodie Van Wagenen (he of the chair-throwing, Tebow-promoting and dubious-media-leaking ways) apparently told a couple of people around a pre-game press conference “Three of us here, can’t leave the room” before going on an incredible rant against MLB commissioner Rob Manfred, saying that the Mets’ players had voted not to play Thursday night (as part of the larger response from MLB teams and other pro athletes, teams and leagues to the police shooting of Jacob Blake). But that rant was broadcast to the world…by the Mets’ own app and website. @NickCocco18 originally tweeted about it; here’s a version with better audio from @RichMacLeod.

Boosted audio version of the leaked video that @NickCocco18 originally posted revealing that Manfred and MLB are trying to manufacture a moment and make the Mets play a game that they don't want to play. pic.twitter.com/ziAuDioI1O

Full transcript of the video: pic.twitter.com/me5s6xpbXv

Those remarks, and those criticisms of the MLB commissioner in particular, were so insane to hear from a sitting MLB GM that even notably-gullible “new report or an old report?” former radio host Mike Francesa questioned if they were real:

This report about Manfred and the Mets can't possibly be true. No way. Just isn't possible.

But, amazingly, shortly before the Mets and Marlins held a 42-second moment of silence (tomorrow, Friday, Aug. 28, is Jackie Robinson Day), placed a Black Lives Matter t-shirt on home plate, and then left the field, Van Wagenen put out an incredible statement saying he had in fact misunderstood, and the proposal for walking off for an hour and then returning to play in fact came from Mets’ owner and COO (for the time being) Jeff Wilpon:

Brodie Van Wagenen says in a statement that the idea he was ripping Rob Manfred for was not Manfred’s, but Jeff Wilpon’s. pic.twitter.com/m9QekmdftC

And, as per Bob Nightengale of USA Today, Van Wagenen privately apologized to Manfred as well:

NY #Mets GM Brodie Van Wagenen says he apologized to Commissioner Rob Manfred publicly and privately about the video criticizing him: "I understood it was disrespectful to his office and to him.''

Meanwhile, both Jeff and Fred Wilpon put out statements, and both of those spelled Van Wagenen’s name wrong at at least one point:

It’s absolutely possible that Van Wagenen was right in the first place and this was Manfred’s idea, and that after the wide criticism it received (including from current MLB players like Oakland A’s reliever Jake Diekman), someone came up with the idea of redirecting that criticism to Wilpon (who likely won’t be owning the Mets for much longer, with a bid from Alex Rodriguez and Jennifer Lopez one being considered there). But it’s also absolutely possible that Van Wagenen is telling the truth, and that he misinterpreted what he was told about the Wilpon-Manfred discussion, and gave Manfred credit for Wilpon’s ill-advised idea.

In any case, this is stunning ineptitude from the Mets’ general manager to relay these kinds of comments on a stream that the club was broadcasting. And the ineptitude is even more incredible if he’s telling the truth and if he was actually wrong in who he attributed those remarks to initially. Regardless of what actually happened in the Manfred-Wilpon phone call, either a MLB owner (for the time being) or the MLB commissioner is completely clueless about how to handle the current situation. And the Mets’ general manager is clueless about where his remarks are being broadcast to, and is willing to absolutely roast the MLB commissioner when he thinks he’s not being overheard.