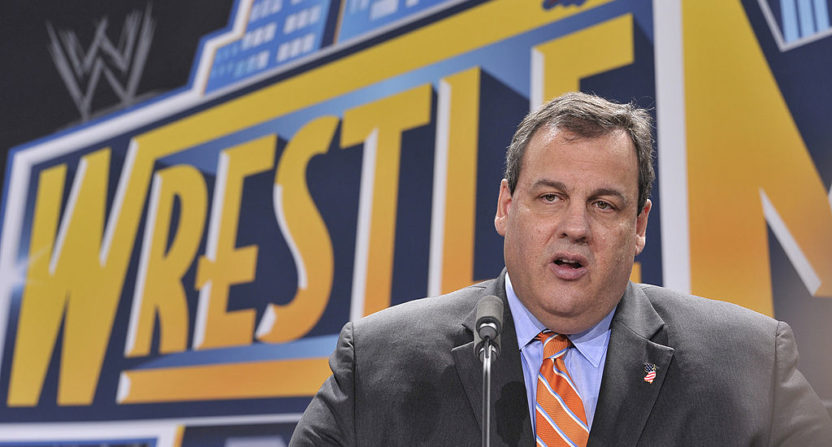 The Chris Christie sports talk radio experiment is producing some fireworks. The controversial New Jersey governor has long been listed as a potential replacement for famed WFAN afternoon host Mike Francesa when Francesa leaves at the end of the year, and he’s filling in for Francesa in the afternoons Monday and Tuesday alongside regular midday co-host Evan Roberts (another strong candidate for the job). It’s far from Christie’s first WFAN appearance, as he’s often called into morning show Boomer and Carton with friend Craig Carton (who he even said could throw a party at the governor’s mansion, before backing off that after backlash) and has even guest-hosted that show at times. Still, that’s a far more friendly environment than sitting in Francesa’s famed chair and dealing with his stable of callers, which led to some flare-ups Monday.

Of course, this is happening right after Christie took fire for closing down public beaches after failing to reach a budget agreement with assembly speaker Vincent Prieto, and then sunbathing on a closed beach and being photographed by NJ.com’s Andrew Mills. An early caller to the Christie/Roberts show, “Mike in Montclair,” lit Christie up for that, calling him a “fatass” and a “bully,” and Christie responded by labeling the caller a “bum” and a “communist.” Here’s the audio, via Sports Funhouse:

Mike goes “Next time you want to sit on a beach that is closed to the entire world except you, you put your fat ass in a car and go somewhere that’s open to all your constituents, not just you and yours.” Christie responds “Interesting, Mike, you know what” and Mike cuts in “What’s that, gov?”, then Christie continues “You know, Mike, I love getting calls from communists in Montclair.” Mike responds “Communists in Montclair? You’re a bully, Governor, and I don’t like bullies.” Christie says “Mike, I’m not the guy who came on the air, swore on the air,” Mike says “Who swore?”, and Christie says “You did.”

Christie and Roberts then talk about how he’s always had poor approval ratings in Montclair, with Christie saying “This is a town, that, to be charitable, leans leftward.” After the clip ends, Roberts reportedly defended the caller’s right to use “fatass”:

.@EvanRobertsWFAN then defended caller's right to use phrase "fat ass" on the air. https://t.co/vB8e8fh44P

Also, Christie rips into the guy for cursing on the air. Earlier in the show, Christie said “bitching” two or three times in a row. https://t.co/AlNfdtS2Dx

And Nick Corasantini of The New York Times tweeted that Mike in Montclair made it past screening by saying he was going to talk about Aaron Judge:

"Mike from Montclair" apparently told the producers he was calling to discuss Aaron Judge https://t.co/CiN73Wx0lK

The really funny part is that this confrontation, or something like it, was predicted by Francesa himself months ago. The Sports Pope told Bryan Curtis of The Ringer (in a piece published Monday, but it’s quoting not-previously-published comments made in an interview Francesa gave Curtis in May for a different piece) that likability would be one of Christie’s biggest challenges in the new job:

In May, I interviewed Francesa. I asked him if he thought Christie could do his job. Francesa’s answer was yes — but it was a qualified yes. He was convinced Christie could master the theater of sports radio. But he was curious — or maybe even slightly skeptical — about how Christie would handle the grind that Francesa’s show entails.

“There’s a couple of things he’s going to have to deal with,” Francesa said. “Number one, his favorability numbers right now are really bad. … A lot of people don’t like him. I mean, really a lot of people. So he’s got to change that.”

Let’s pause here to savor the fact that a sports radio host is telling a governor and former vice-presidential short-lister that he needs to worry about his likability. That’s just wonderful.

…What would surprise Christie if he sat behind your microphone? I asked Francesa.

“The depth that you have to have of the subject matter,” Francesa said. “The audience is incredibly prepared. They know a lot. They really know a lot.

We’ll see how further callers’ exchanges with Christie go, especially when it comes to sports and not just politics. But if this one set the tone, there could be plenty of confrontation. And that doesn’t necessarily bode well for Christie’s chances of getting the chair long-term, unless it produces plenty of ratings.