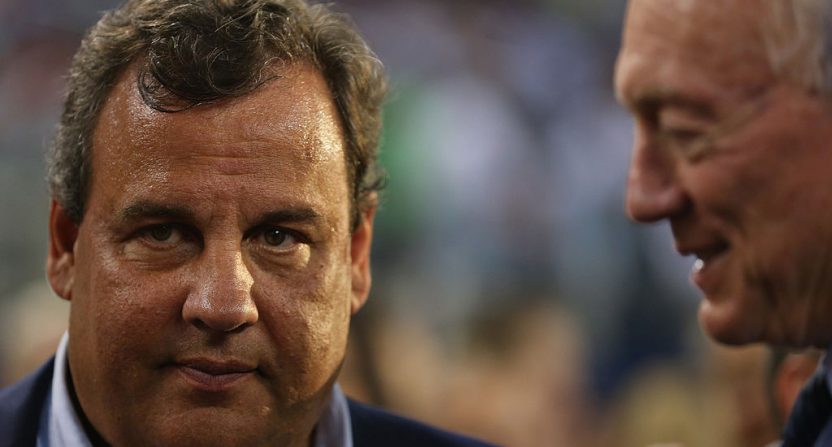 The chances of New Jersey governor Chris Christie replacing Mike Francesa as a sports talk host on New York City’s 660 WFAN appear to be rising. Francesa will leave the station this December, and Christie leaves office three weeks later. There’s been speculation about Christie as a possible Francesa replacement for months, as he’s regularly called into Francesa’s show, has served as a recurring popular guest host on WFAN’s morning Boomer and Carton show, and has expressed interest in the role, and now we have confirmation from Dustin Racioppi of NorthJersey.com (owned by Gannett) that a possible deal with Christie is “worth pursuing” for WFAN:

WFAN 660-AM, the region’s dominant sports-talk radio station, will “be looking to do stuff” at the end of the year, when longtime afternoon drive host Mike Francesa’s contract with the station ends, said Mark Chernoff, the station’s program director and vice president of its parent company, CBS Radio New York. Christie, whose name has been rumored as a possible replacement for Francesa, is among “plenty of candidates” the station is contemplating to fill the void left by Francesa, Chernoff said.

“I would certainly at least want to consider him,” Chernoff said in an interview this week. “If he’s interested and we’re interested, it’s worth pursuing.”

That’s not terribly strong, but that’s to be expected here. WFAN has plenty of candidates to consider for Francesa’s role. Even if they did really want Christie, they wouldn’t want to tell the media that until they signed him (otherwise, it gives him more leverage in contract negotiations). It’s notable to have Chernoff on the record here saying that they’d at least consider Christie, though, and Racioppi’s piece has plenty on why this might make sense for both parties.

For one thing, Christie might make more in a high-profile WFAN gig than he would in many of the Washington jobs he’s been linked to. He’s also talked repeatedly about how he doesn’t want to work in D.C., and he’s expressed interest in a sports broadcasting job, as in an interview on SNY last week that Racioppi quotes:

“As my son said – he said, ‘I can’t believe I’ve been listening to you talk about sports my entire life and that someone might actually pay you to do that.’ He said, ‘I can’t imagine how great that would be for you,'” Christie said during an appearance on the SNY cable network last week. “And so, yeah, that’s certainly one of the things that I hope I’ll have a chance to consider when I get out and stop being governor.”

Christie also called in to Francesa’s show last month, and Francesa asked what Christie was going to do after he leaves office (at 7:45, after quite the digression about why Christie was calling him instead of Boomer and Carton, and a discussion of Christie’s Cowboys fandom (see the photo of him with Jerry Jones above, from a September Cowboys-Giants game in Texas):

At 8:45, after Christie talks about how he wants to make money, have fun and spend more time with his family, Francesa says “I can think of a job that fills all those, the job I’m going to vacate in December next year.” Christie demurs by saying that both he and Francesa have their future speculated about a lot, and after he says “I’m going to have wide-open ears, it’s going to be the first time I’m a free agent,” Francesa pushes with “Would you throw your hat in the ring for that, is that a possibility?”

Christie then responds “Mike, you don’t throw your hat in the ring for that kind of thing, you see what happens.” Francesa then asks “Could you see yourself talking sports daily, or talking whatever you want to talk about, sports or whatever you want to talk about, could you see yourself doing this kind of show every day?” Christie responds “Well, you can tell that I love to talk, and I love sports.”

Christie then talks about how he enjoys filling in on Boomer and Carton (he’s guest-hosted that show 10 times in the last year), then says “I enjoy doing this kind of stuff, I enjoy talking about news also, and current events, but I love sports,” and then says he’d be open to potentially doing both news and sports shows.

I don’t know why you’d have to do either/or,” the Republican governor said. “You could do both. I think if you have a passion for both, then there’s no reason why you shouldn’t have an opportunity to do both if someone thinks that you bring value.

Meanwhile, NJ.com’s Steve Politi wrote last October that Christie seemed to be positioning himself for a move into radio:

The WFAN studios are the one consistent place where you actually can find Christie these days. If he’s not filling for one of the co-hosts on the Boomer & Carton Show, he sometimes calls in just to add his two cents. I imagine the speed dials on his iPhone are listed “1. The Donald. 2. CC/Booms.”

And that, I think, is also the order of his post-gubernatorial career choices. Sure, Plan A was to become Trump’s consigliere in Washington for the next four years, but now that this is looking about as likely as Rutgers making the Rose Bowl this season, is Plan B yapping about sports for a living?

To be clear: I don’t have any inside information here. This is just a guess, based on what I know about Christie and his clear affinity for the spotlight and for sports. But it sure seems like he’s auditioning for a job at WFAN, and maybe for the job: Replacing the soon to retire Mike Francesa.

What’s also notable from the NorthJersey.com piece is that Christie might get some more regular guest-hosting slots this summer if he is serious about this, and that it’s “not likely” WFAN will fill Francesa’s 1-6:30 p.m. slot with just one show (so Christie might be just part of the overall replacement plan):

Francesa typically takes about six weeks of vacation during the summer, and Chernoff said that if Christie has the time, “we’ll probably let him do some afternoon shows” to test him out in an unfamiliar time slot.

Chernoff said Christie’s appearances have been popular with listeners, regardless of whether they agree with his opinions.

…Francesa has been a mainstay of WFAN from 1 to 6:30 p.m. since 1989 and a perennial ratings leader, whether by himself or with his longtime on-air partner, Chris “Mad Dog” Russo, who left in 2008 for Sirius XM Radio. Chernoff said “those are huge shoes to fill,” but it is “not likely” that whoever replaces Francesa will do so for the full afternoon drive.

“I can’t say that the next person or team doing the show will do five-and-a-half hours,” Chernoff said.

If anything, that might add to the case for Christie as at least a partial Francesa replacement. Throwing someone who hasn’t regularly hosted a daily show into a prime five-and-a-half hour slot is risky regardless of their profile and other work, and that might also be a substantial grind for a relative radio newcomer like Christie. Meanwhile, going with a few different Francesa replacements might let WFAN play around to see what works best, and it could mitigate at least some of the risk of going in an unconventional direction with Christie. There’s still a long time until Francesa leaves in December and Christie exits office in January, and this is far from locked down, but it certainly sounds like the chances of Christie taking at least part of Francesa’s old slot are becoming higher and higher.