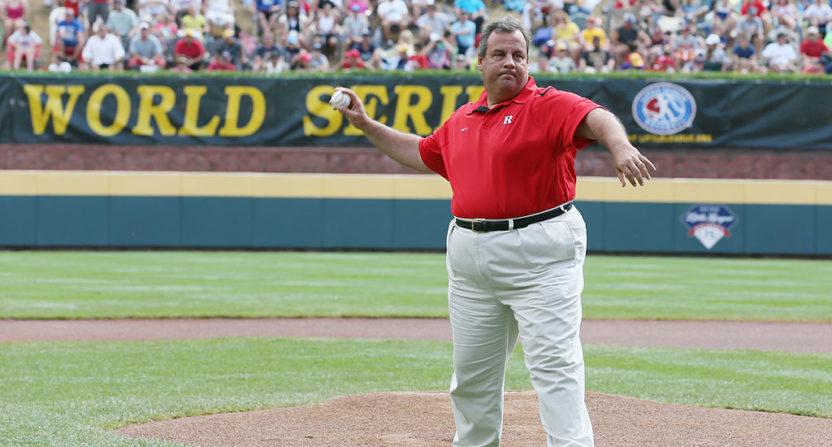 A week ago, New Jersey governor Chris Christie co-hosted “Boomer & Carton” on WFAN and told co-host, Craig Carton, that he would allow Carton to throw a pool party at his Governor’s mansion. Now Christie is going back on that promise.

The offer emerged during a discussion about the upcoming Mayweather-McGregor fight on Aug. 26. Christie said he would be away during the fight, but Carton would be more than welcome to use the Governor’s mansion to party with as many as 75 people.

On Tuesday, Christie broke the bad news to Carton that he would be back from vacation the day of the fight and the offer was no more. It’s more than likely that Christie realized it’s probably not a great idea to allow your radio host buddy to use government property for a party while you’re, you know, the governor, for optics and otherwise.

“Your spokesperson actually had to put out a statement about it,” Carton said to Christie.

“Yeah, because we were getting inundated with calls because these are people who have no life,” Christie said, referring to journalists.

“They don’t understand that … one of the basis of this show is comedy, is we’re having fun with each other and that you and I have been friends for now 14 years and we have good, fun banter back and forth,” Christie said.

We’ve speculated about Christie becoming a sports talk host on WFAN after he ends his governorship before. WFAN has even gone as far as confirming they’ve thought about bringing Christie on board if the opportunity presents itself.

WFAN 660-AM, the region’s dominant sports-talk radio station, will “be looking to do stuff” at the end of the year, when longtime afternoon drive host Mike Francesa’s contract with the station ends, said Mark Chernoff, the station’s program director and vice president of its parent company, CBS Radio New York. Christie, whose name has been rumored as a possible replacement for Francesa, is among “plenty of candidates” the station is contemplating to fill the void left by Francesa, Chernoff said.

“I would certainly at least want to consider him,” Chernoff said in an interview this week. “If he’s interested and we’re interested, it’s worth pursuing.”

Given the current climate, it actually makes a lot of sense that someone could transition seamlessly from a life in professional politics to sports radio.