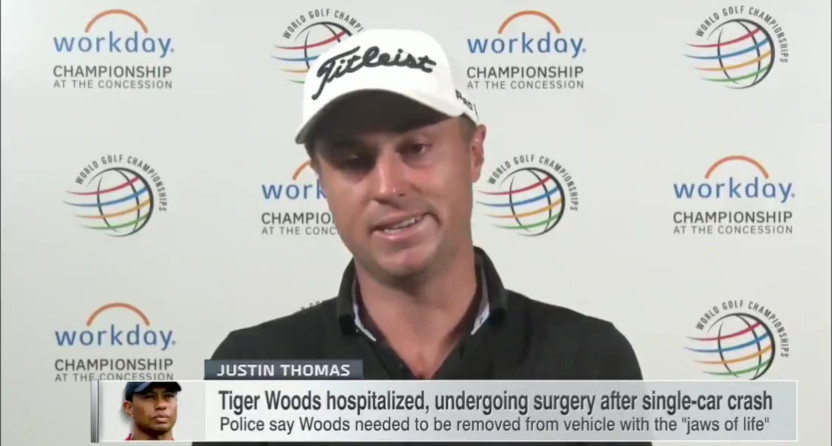 When there’s major breaking sports news, how to react is always a challenge for leagues, news organizations and more. The news of Tiger Woods’ injuries in a single-car crash Tuesday led to a lot of discussion about sports networks being slower to get to live coverage than news networks, but it also led to a lot of discussion about the PGA Tour deciding to press ahead with a Justin Thomas virtual press conference (initially supposed to be about the WGC-Workday Championship at Concession Golf Course in Bradenton, Florida this week) 15 minutes after Thomas heard the news about Woods.

There are arguments on both sides there. The big takeaway from that press conference was what Thomas had to say about Woods, one of his closest friends, and the presser did give him a platform to do that. But there’s also a case that the Tour should have just cancelled that presser given the timing of the Woods news, as it’s asking a whole lot of Thomas to do a big media interview minutes after finding out this news about his friend. It’s a tough balance to strike, and probably the best approach is to go with whatever the interviewee wants, whether that’s pressing on or postponing.

In the end, though, it wasn’t the press conference itself that sparked the most notable blowback. What really drew backlash was the way a reporter followed up Thomas’ emotional response to a Woods question with a question…about the greens at Concession.

Justin Thomas reacts to the news of Tiger Woods being injured after a single-car crash. pic.twitter.com/RMXKLfSi9N

"I'm sick to my stomach," he said with tears in his eyes. "It hurts to see one of your closest friends get in an accident. I just hope he's all right. Just worried for his kids."

He was then asked about the greens this week. pic.twitter.com/HkjUDpswYa

Now doesn't seem the time to be asking Justin Thomas about greens. https://t.co/jFcnZoBZjJ

That really doesn’t seem to be the moment for a question unrelated to Woods. If the Tour and Thomas were going to go on with this presser even after the Woods news, it would have seemed to make sense to just give Thomas a space to talk about this however he wanted to. Reacting to his emotional response with a question on something completely different isn’t reading the room, and it’s not a good look.

There’s often a perception of members of the sports media as callous to what’s actually going on with the athletes they cover. That perception isn’t always fair; yes, there are absolutely some people who give credence to that, but there are many who treat athletes as human beings first and athletes second. But moments like this where a heartfelt emotional response to a serious situation gets derailed by a banal question about something else only add to the perception of a callous media. And it would be nice to see less of these moments, even if it means not immediately finding out Thomas’ thoughts on the greens this week.