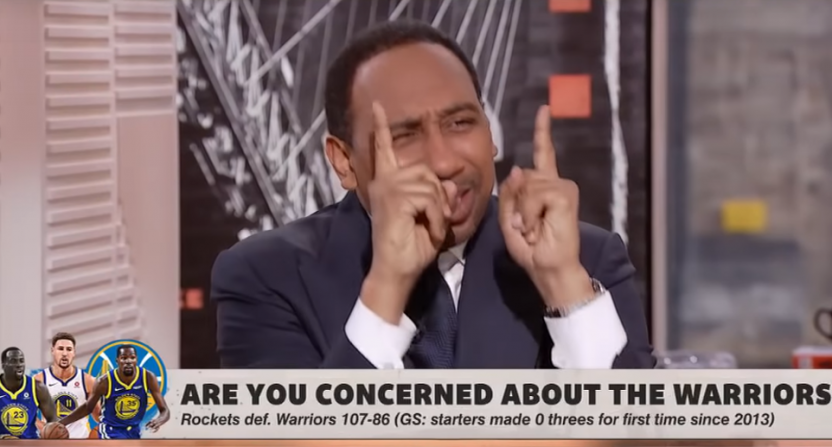 There’s been a lot of talk about ESPN’s Stephen A. Smith recently, from him trying to pump up his journalism background and saying he wouldn’t take non-answers from Kevin Durant, reading a text from an anonymous Wizards’ player on-air, and saying he’s tired of getting up early for First Take and would love to host a primetime or late-night show. All of those threads are showing up together again in the latest profile on him, from Uproxx’s Robby Kalland, who spent time with Smith in Los Angeles for “A Day With ESPN’s Stephen A. Smith, The Hardest Working Man In Sports Television” (a title that no doubt would be disputed by a lot of people who make far less than Smith). First, and likely most importantly, Smith sounded more committed to moving to Los Angeles than ever, and seemingly floated leaving ESPN on a more serious level than he has in the past:

Smith’s contract with ESPN runs up in 2021, and he’s already pondering his next move. While he’s not certain what that will be, three things are certainties in his mind. The first is to get away from mornings, because he hates waking up early. The second is that he wants to make a permanent move to Los Angeles – something he confirms to himself every time he walks outside and into the sunshine — and he thinks he’ll be able to get to L.A. in the next couple years. Finally, he wants to begin producing content beyond just being an on-air talent.

Still, he knows being on-air is his bread and butter and will try to figure out what makes the most sense for the next step in his career.

…[Steve] Harvey is trying to push him into doing more boxing, insisting the sport needs more “color,” noting Smith’s personality and passion is something desperately needed on boxing television — Smith currently does some boxing for ESPN, including work on the recent Vasiliy Lomachenko-Jose Pedraza fight. Smith, however, isn’t quite so sure sports are his future.

Well, then. Smith does have experience as a guest on Fox News, and as mentioned, he’s already expressed his interest in doing a late-night show. The question is if anyone in either arena would have all that much interest in Smith, though. And it’s also worth wondering if this whole “move to LA” thing will work out even if he stays with ESPN; yes, they have significant LA operations, so it’s not necessarily the wrong fit on the studio side, but it’s unclear if there’s a primetime, late night or afternoon role for Smith that really makes sense for them.

ESPN keeps trying to shoehorn Smith into properties like SportsCenter, but that’s often provoked plenty of disdain from viewers. And while there’s obviously an audience for Smith’s brand of ridiculous debate in the morning, it’s unclear if that exists in other timeslots. Maybe ESPN will want to keep Smith even at another slot, especially as they’re making it more and more clear he’s a key part of their brand these days, but it’s far from certain that the audience will follow. Kalland writes that Smith’s first deal with ESPN wasn’t renewed because “he demanded too much,” with him saying “I didn’t know my worth.” Some of that may wind up being true again.

Maybe Smith does have a more accurate picture of what ESPN will pay to keep him (or what others will pay to get him) these days, and maybe there is something that will let him go to Los Angeles and sleep in, but from the outside, it’s not clear where all this leverage he thinks he has is. It also should be noted that ESPN doesn’t seem to have been terribly hurt by the departure of Smith’s old debate partner Skip Bayless (and yes, some of that’s about Smith’s success in keeping debate-loving audiences around), and that letting big-name stars who wanted a lot walk has often worked out for them.

What’s also notable about this piece are the parts where Smith emphasizes his “journalistic roots” (yes, he worked for the Winston-Salem Journal, the Greensboro News and Record, the New York Daily News, and The Philadelphia Inquirer, but some of his time at that latter job was a columnist rather than as a reporter), says “don’t forget my resume, because I’ve earned this” and references the “two-plus decades of grinding” that led to his First Take role. Sure, but that role in leading daily asinine sports debate has a lot more to do with his cartoon-character status and ability to be emphatic on command about anything than with his work for local newspapers.

And while Smith defends his reporting to Kalland with a General Hospital analogy that stories change (he would know), that doesn’t explain a lot of his more prominent missteps, such as saying Dan Gilbert wanted to sell the Cavs (and then calling those who believed his apparent reporting to be “idiots“) or saying “LeBron James will have a conversation with the Warriors this summer.” ESPN’s own news desk does not take Stephen A. reports seriously despite all those “journalistic roots,” so it’s not clear why anyone else would.

The overall moral of the story with anything around Stephen A. Smith is that he’s going to make a whole lot of claims. And some of them may even prove to be true; maybe he will find a way to move to L.A., with ESPN or someone else, and maybe he’ll have bidders lining up to give him a late-night show or a political show. In the Peak TV, peak-streaming world, anything is possible, and the landscape may be even further fragmented by 2021, to the point where someone really overpays Stephen A. in hopes he’ll put or keep them on the map. And as much as it may pain us to admit it, there are even dumber things featuring even bigger blowhards out there.

So maybe this will all work out great for Stephen A., and it’s certainly notable that he’s being this bold about his future plans. But as with much of his “reporting,” all of this should be taken with several grains of salt until there’s some outside confirmation.