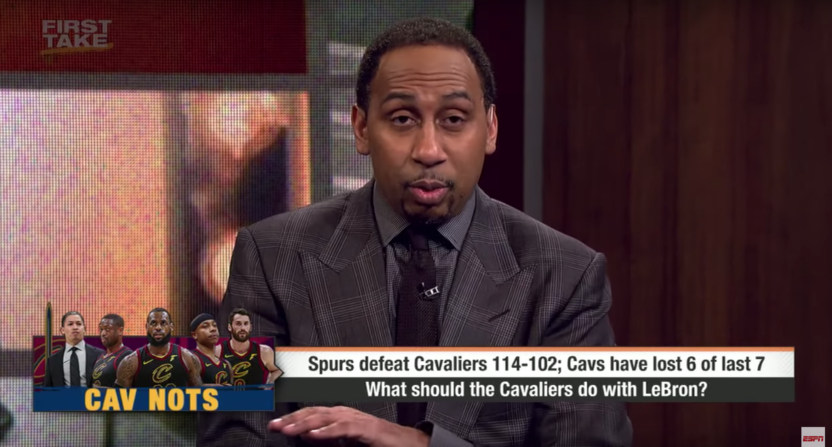 Stephen A. Smith’s job is to bluster, and he’s one of the best at it. If truth and reason sometimes take a back seat to provocation, it’s no big deal. That’s the gig.

But Smith is also an ex-reporter and columnist, and he remains plugged in to the sports world — particularly the NBA. Every once in a while, he reports something credible and we all have no choice but to pay attention.

On Wednesday, in the middle of a First Take discussion about whether the Cavaliers should trade LeBron James, Stephen A. casually mentioned that, “What [Cavs owner] Dan Gilbert wants to do, from what I’m being told, is sell the team.”

You can hear Smith’s comment at 4:46 in this video:

Now, if Gilbert is really looking to sell the Cavs, that’s a big story, the type that might lead SportsCenter. At first, it seemed as if Stephen A. just dropped a veritable Woj Bomb into a random First Take segment.

Only no one at ESPN batted an eyelash. The news desk didn’t write up a story about Smith’s comments, the First Take account didn’t tweet it, and the afternoon shows didn’t make it a debate subject. Even as a tweet from a non-ESPNer citing Smith’s claim gained over 3,000 retweets and a couple sites began to aggregate the comments, ESPN was quiet.

The obvious explanation for this silence is that ESPN decision-makers didn’t actually believe Smith’s “report” had merit. Someone at the network decided that what Stephen A. was “hearing” was not legitimate enough to qualify as news. If Adrian Wojnarowski shared rumblings of a regime change in one of the NBA’s highest-profile organizations, the network would plaster it everywhere. If Stephen A. does the same, everyone shrugs.

The point here isn’t just gratuitous Stephen A. Smith-bashing. There’s a real journalistic question at play. With the democratization of media in the internet-age and the relaxation of the opinionist vs. reporter divide, we now often see tweets advertising “unconfirmed” reports or sharing information with a “could-be-wrong” disclaimer. Sometimes, a dude on Reddit who knows the right guy can be first on a major news story. Often, it’s difficult to know just how much stock to put in reporting you see online from anyone outside the trusted cadre of consistent news-breakers.

But ESPN typically holds its employees to a higher standard of sourcing, and the network’s obvious ambivalence about what Smith seemed to report Wednesday raises the question of why he’s allowed to say things like that in the first place. Why does ESPN let a high-profile employee offer what sure sounds like a ground-breaking report, if it doesn’t actually trust that the information he’s sharing is correct?

Is Stephen A. exempt from ESPN’s reporting guidelines? Is he allowed to say things that sound like reports but function as commentary? Could, say, Brian Windhorst get away with the same act?

Some of these questions are inevitable at a time when people who report opine on the side and people who opine report on the side, but the situation also reflects some sloppiness on the part of ESPN. When you hold different employees to different standards, the result is confusing for everyone.

UPDATE: For “clarification,” ESPN pointed us toward Thursday’s edition of First Take, on which Stephen A. denied saying that Gilbert would sell the Cavs, which wasn’t the question at hand. He didn’t apologize for his point-blank assertion that Gilbert wants to sell the Cavs and instead said that people who took his report seriously were “idiots.”