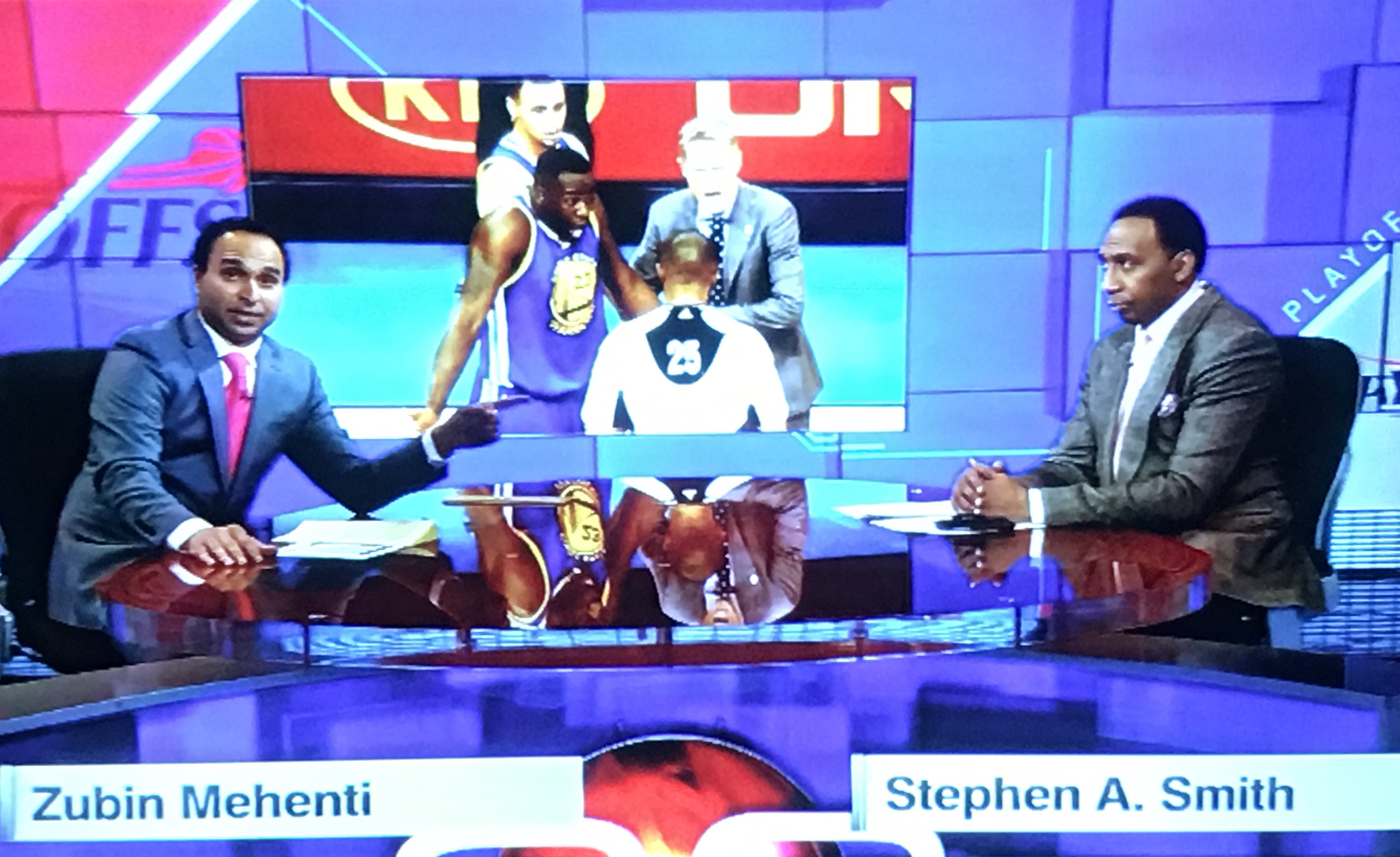 I’ll give him this – Stephen A Smith is a hard worker.

Stephen A started his day embracing debate along side Skip Bayless on the polarizing First Take. He finished his day apologizing to Canada on SportsCenter following Game 4 of the Eastern Conference Finals. In the middle of his long day, viewers were treated to quite a heavy dose of Stephen A on the 90 minute 6 PM ET edition of SportsCenter. How much you ask? Of the 67 non commercial minutes, viewers got 37 minutes of Stephen A. Smith.

Smith was present 55% of the total minutes and had 14 more minutes of screen time than the 23 minutes of commercials. He was brought on 6 different times (below a crappy vine I made showing his various intros through out the program).

Below a look at the rotting corpse of SportsCenter featuring Stephen A Smith.

After three minutes of highlights and interview clips surrounding Draymond Green’s groin kick, Zubin Mehenti brings in Smith. Six minutes of chatter ensues. As Mahenti transitions to something less terrible he promises Smith will be back on later. (THANK GOD!)

Eight minutes later and before we’ve even had a commercial break, Stephen A returns. This time we’re treated to eight minutes of Stephen A. This time to spice it up a bit, Carlos Boozer draws the long straw and sits shotgun as the “I actually played in the league and have some thoughts but will mainly just be Stephen A’s yes man.” In return for this, Stephen A. absolves Boozer from backing out on a deal to join LeBron and the Cavs many years ago and instead going to the Jazz. I’m sure Boozer loved rehashing that. 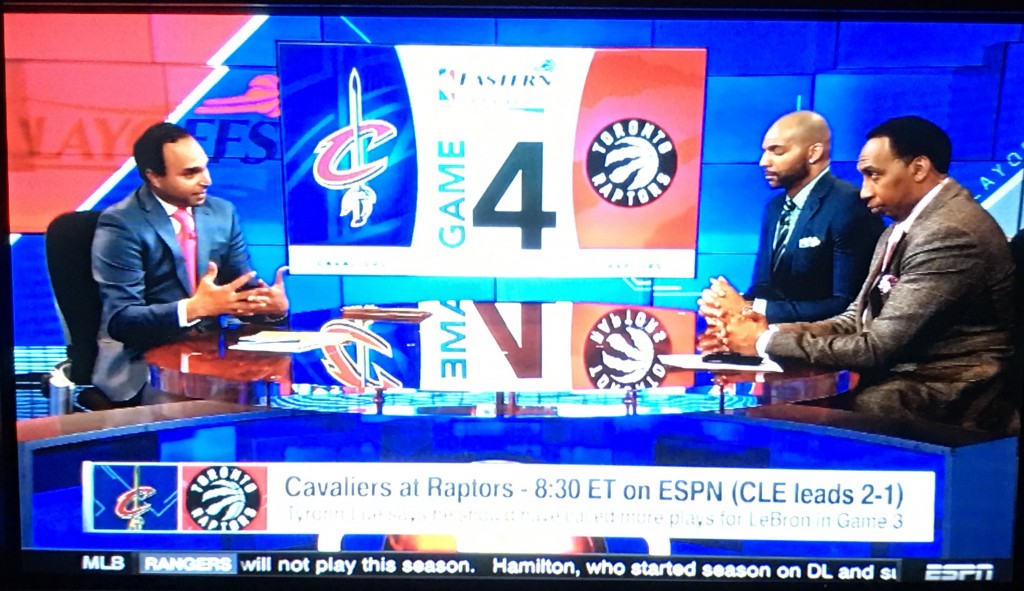 Sadly SportsCenter was unable to talk about only basketball although they certainly tried. Halfway through SportsCenter Mahenti tagged in Herm Edwards and Tedy Bruschi to talk about the shocking revelation that the NFL continues to meddle in concussion research.

But a former player and a former coach wasn’t enough for this five minute segment. Just like Stephen A pointed out that you GOT to get LeBron the BALL!, you got to keep feeding Stephen A hot takes even if it means switching to his bad side where his bad sitting posture is more pronounced. 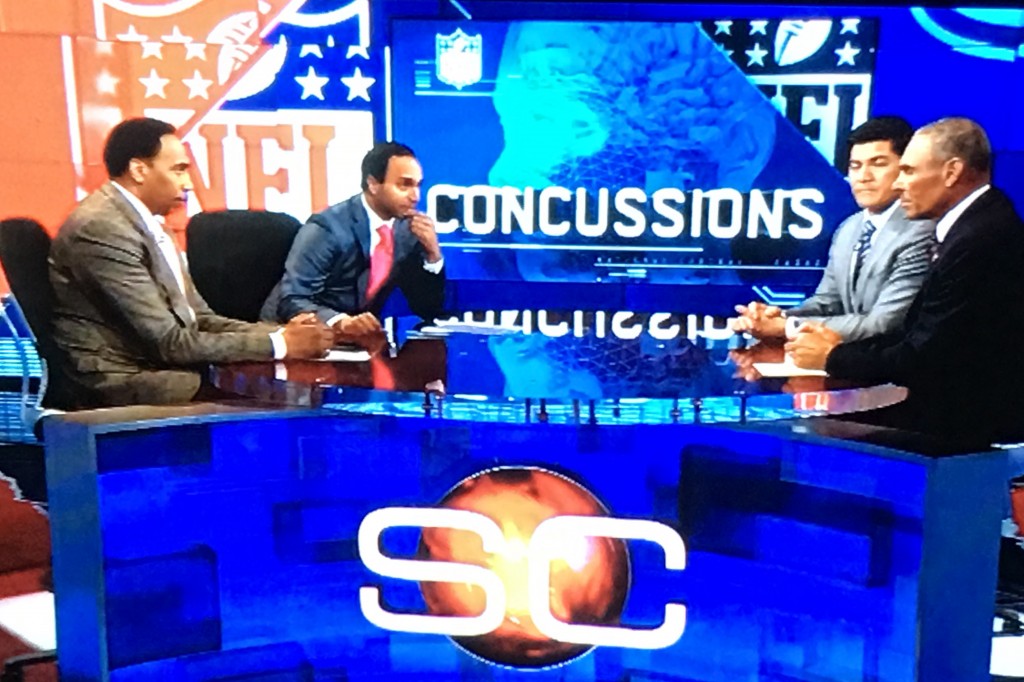 15 minutes of SportsCenter consisted of the segment above, five minutes of commercials, and then five more minutes of Stephen A. HOW ARE PEOPLE CUTTING THE CORD?!?!?!  Often we had a lot of these split shots as Mehenti would rotate through various guests and while interviewing we’d just get these shots of Stephen A reacting. In some interviews, he was shown but didn’t ask a question. Others he did. Either way, you were treated to this shot just so you wouldn’t go through Stephen A withdrawls. 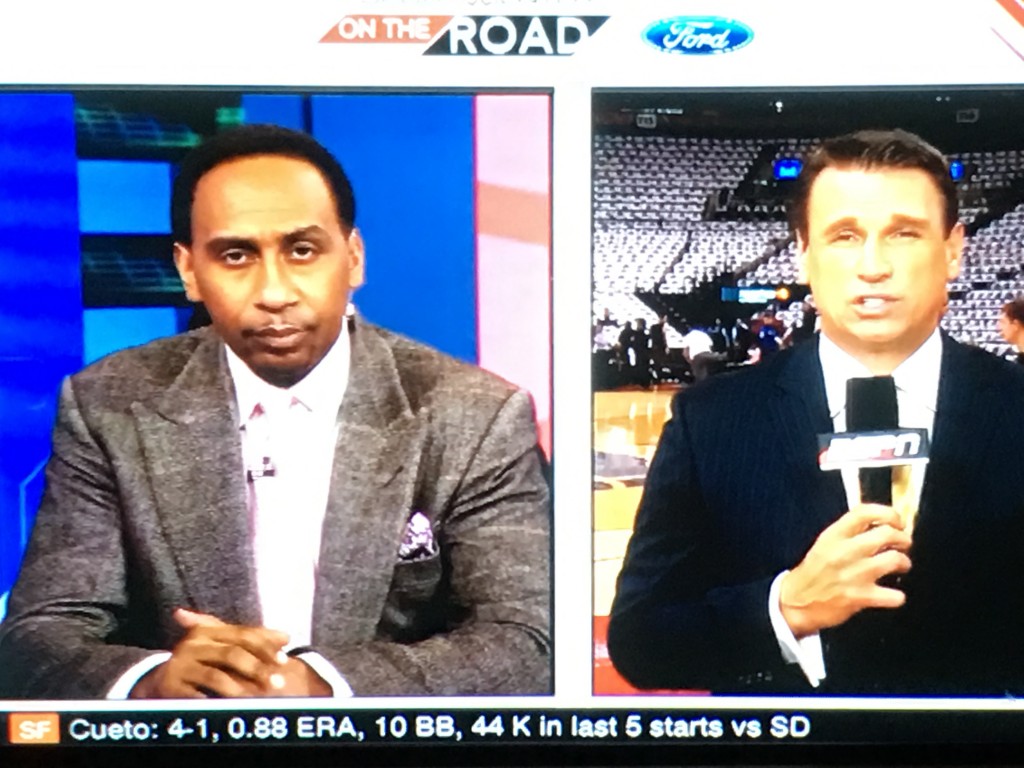 And then it finally happened. Ten minutes after Adrian Wojnarowski reported that Green would not be suspended, Marc Stein followed suit (not crediting Woj of-course) and it was showtime. Presumably, this is why Stephen A was glued to the set. It was time to give his opinions on the ruling using a VERY LOUD VOICE.

Boozer was back on. There was eleven minutes of discussion on the non suspension, a final commercial break, and then three more minutes previewing Cavs-Raptors.

As much as people like to rail on Skip Bayless, more or less he’s segmented to First Take. It’s easy to opt out from watching him. Unfortunately for those who find Stephen A. Smith equally as grating, you’re going to have to put some effort in avoiding him especially during the NBA playoffs. Quite frankly, SportsCenter with 37 minutes of Stephen A. sucks.