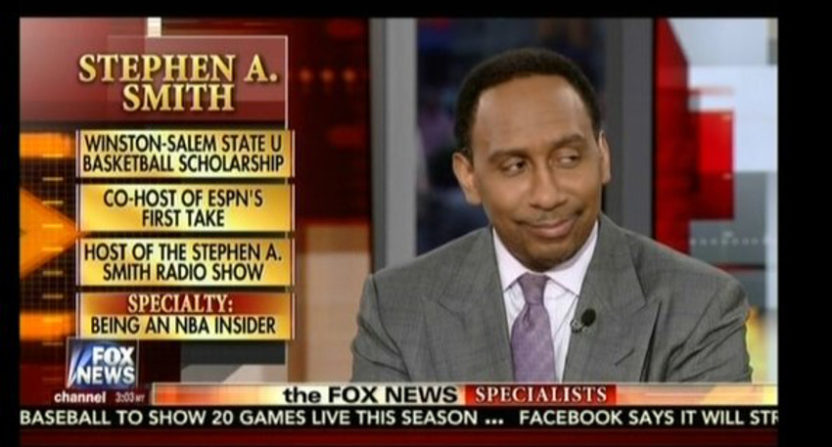 ESPN First Take cohost Stephen A. Smith embraced debate in a whole new venue Thursday, going on Fox News’ new The Specialists (alongside fellow guest Ted Nugent and co-hosts Eric Bolling, Katherine Timpf and Eboni K. Williams) to debate politics for an hour. Smith touched on everything from the FBI’s investigation of Russian ties to the Trump administration to the credibility of the mainstream media to crime in Chicago and mayor Rahm Emmanuel’s response (and former president Barack Obama’s alleged insufficient response) to whether he’d pick Michael Jordan or LeBron James in an all-time NBA draft. Sadly, there were no hecklers present. Here are the clips, first of Smith (somewhat) defending the mainstream media (starting around 2:13) against Bolling’s criticisms of “fake news”:

That’s got some notable lines. Here are Smith’s comments (first in reaction to Bolling saying that former FBI director James Comey “blew his own story out of the water”):

“He may have blown his own story out of the water, and I can definitely relate to that and understand exactly where you’re coming from, and I don’t blame you for being critical of individuals or institutions that have made that mistake. That’s fair enough. I’ve been a reporter for over two decades, I understand it’s more important to be right than first, even though I pride myself on being most, er, both, most times. Here’s the reality of the situation, however. No matter what entity you’re working for, an individual is an individual. Everybody can’t host this show, you are! Everybody’s not hosting it. You can’t look at one person who made a mistake and denigrate the entire institution. And that is what your president has engaged in.”

Bolling then says “He’s your president too,” and Smith says “I apologize for that, I’m not one of those who say that, he is my president as well. I didn’t vote for him, but he’s my president, and that’s the responsible thing to do. But it’s important to point out that when you’re calling out somebody, and he gets away with that, what about when a successor comes along? And the sort of license that you give him to circumvent the media, because everybody’s ‘fake news,’ can be attached to the next administration. Be careful about that!”

Bolling then throws over to Ted Nugent, who says “I don’t think Stephen is getting the big picture. It’s not just individuals, it’s a whole army of media individuals who are out for blood. They’re so left, they’re so in the Democrat tank, that they are going to attack the president and anything Republican or anything right-side, in such a consistent fashion that it is an overwhelming tsunami of ‘fake news,’ attack mode, with no basis. So it’s not just individuals in this day and age, it’s an overall movement, and the movement of the media, and academia, and the left and the Democrats overall is just Saul Alinsky beserk.”

Here’s Smith complaining about illegal immigration using an analogy from a friend, and agreeing with Nugent on that front:

“Say you’re waiting at an amusement park, and it’s a long line, and you’re waiting two to three hours, trying to get on a ride, and somebody walks up, gets in front of you and goes on that ride, you gonna feel good about that? That’s illegal immigration. No one should have a problem with illegal immigration getting addressed.” Nugent responded “That’s it in a nutshell right there.” That then went on into Smith saying “illegal” should be emphasized in that discussion, and Nugent saying “the left and most of the media, which is the same thing” and saying that Democrats say Republicans are against all immigration.

Next, here’s Smith talking about how disappointed he was by Obama not doing more about violence in Chicago:

“To me, when I hear the name Rahm Emanuel, what hits home for me is President Barack Obama. The one thing that I have had an issue with, and you can debate whatever, y’all can do that another day, for me personally, being an African-American, seeing the crime that has been raking through certain parts of Chicago, I’m not saying that our former president didn’t say anything, but I always found myself wishing that I heard more, and I always suspected that I didn’t hear more as it pertained to that issue because Rahm Emanuel, his former chief of staff, was the mayor. When I hear the name Rahm Emanuel, that is what comes to my mind, the crime that exists in Chicago, what little has been done to address it. And we have a mayor that is there, and I thought he was in a position to do so much more because of what he was connected to. And it didn’t happen.”

Here’s their debate over Russia:

Stephen A. Smith and Ted Nugent went on Fox News, and it was – as you probably expected – a total disaster. (By @MattBinder for CAFE) pic.twitter.com/a6Nw6uhLH1

Here’s Smith’s take on President Trump’s usage of social media, which provoked quite the debate with Bolling:

And here’s his episode-closing take on LeBron versus Jordan:

There were plenty of notable Twitter reactions to Smith’s appearance on Fox News. Here are a few:

oh good stephen a smith and ted nugent are on fox news right now, this is my nightmare pic.twitter.com/9WDUkOKYeU

'TED NUGENT' debates with 'STEPHEN A SMITH' on 'FOX NEWS' about the 'JAMES COMEY FIRING' reads like the shittiest Mad Lib of all time. https://t.co/DmvPsYSrN6

“To talk about this breaking news further, we welcome in our resident Presidential Russian Collusion expert, Stephen A. Smith…” pic.twitter.com/TYj9JALUDp

Stephen A. Smith and Ted Nugent yelling at each other about the special councel on Fox because the world wasn't stupid enough already. https://t.co/5nABEz4X7e

The deep state is winning. pic.twitter.com/YV3TBUfrTp