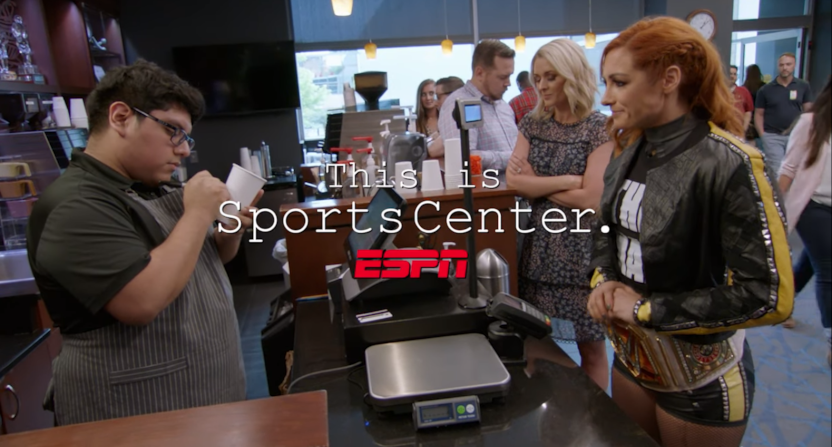 After parting ways with long-time ad agency Wieden+Kennedy (who left to make commercials for Fox) in January 2017, ESPN has continued the “This Is SportsCenter” brand themselves with some in-house ads. Those started in March 2018 with some spots with the Yankees’ Aaron Judge, and there have been a few other ones since them, but they’re bringing out 12 at once Saturday as part of their 40th anniversary celebrations. Eight of those will be premiering on TV, with four premiering on their digital channels. Here’s a  quotes from the release about the new ads:

“We’ve been working to develop terrific new SportsCenter scripts for a while now, and when we realized the timing worked out perfectly with our anniversary, we pressed GO!,” said Laura Gentile, SVP of Marketing. “This campaign has always been iconic, and made to delight fans. We hope they love these new spots.”

And here’s a breakdown of who’s in the new ads by number of appearances:

3 appearances: Becky Lynch (“What’s My Name” on TV with Noel the Barista and Nicole Briscoe, “Vending Machine” on digital with Jay Harris, “Push” on digital with the Rutgers Scarlet Knight)

From that list, it’s sort of surprising to see Lynch, Harris, and the Rutgers mascot featured the most. Of course, the “Mouthguards” spot is a big ensemble piece, and that counts as one for both Harris and the knight. Here’s a look at that one:

So it’s really Lynch that has the most appearances here, although two of her three spots are digital ones (and one of those is a real short one with her just pushing the knight as she walks down the hallway.) But it’s still interesting to see ESPN go big on WWE in an ad campaign; they’ve covered it a bit over the past few years, but that’s come with some internal pushback, some external criticism, and some embarrassing on-air moments. It’s also particularly interesting to see a pro wrestler so prominently featured in an ESPN campaign ahead of WWE Smackdown’s move to one of ESPN’s rivals, Fox. (And that move has its own ad campaign developed by ESPN’s former ad firm.)

But there’s also some merit to this, as the three spots with Lynch are quite different (one’s her cutting a promo in the coffee shop, one’s her helping Harris with a stuck vending machine in an unexpected way, and then the third is that hallway push), and it might be harder to feature an athlete from more traditional sport in three such different ways. Here’s Lynch’s TV spot:

We’ll see how this and the other new “This Is SportsCenter” entries are received.