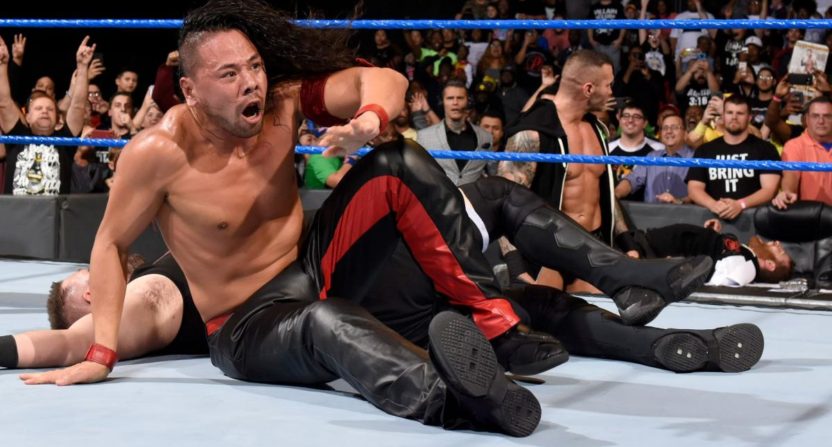 WWE and Fox have agreed to a new deal that will make Fox the exclusive home of SmackDown Live, ESPN’s Darren Rovell reports.

Per Rovell, Fox submitted a “massive offer” for SmackDown, which has aired on USA Network since 2016. The series will reportedly move to  Fox in October 2019.  The Wrap reports that SmackDown will move from its current Tuesday night home to Friday nights.

The Hollywood Reporter stated that the agreement between Fox and WWE would run five years and be worth slightly over $1 billion. THR also reports that a third party bid even more than Fox, but WWE opted to go with the Fox bid because of the ability for promotion during MLB and NFL games.

Rovell said Monday on Twitter that SmackDown will air on the main Fox channel, not on FS1, giving it a larger platform than it has ever had before and perhaps allowing it a chance to supplant Raw as WWE’s premier show.

Yes it is scheduled to be on main Fox.

This news comes days after The Hollywood Reporter revealed that NBCUniversal was committed to keeping WWE Raw but was willing to lose SmackDown to another network. Fox had been considered the favorite to land the show, given its reported interest in acquiring wrestling rights or even buying WWE outright. Wrestling seems to fit perfectly with the network’s “new Fox” strategy, which largely seems to entail cutting back on dramas and sitcoms, while going all in on sports (and apparently, sports entertainment as well).

Even with SmackDown moving from Tuesday to Friday (a night not generally known for high-level television programming), this seems like a big win for WWE. Not only will Vince McMahon and company reap lucrative rights fees, but they’ll benefit from SmackDown returning to broadcast TV, with a new broadcast partner, on a network with a wide reach and plenty of resources. And if NBC wants to move Raw to its main network to maintain that show’s status as the premier weekly wrestling program, as some have speculated, then all the better.

The THR report that discussed the financial value of the deal also remarked about Fox’s interest in retaining the UFC, which got $750 million over five years from ESPN mainly for digital rights.

It’s unclear what effect if any, the WWE deal will have on Fox Sports’ calculation in renewing its UFC rights package, which expires at the end of the year. The Endeavor-owned promotion recently finalized a $750 million deal with ESPN+, the Disney-owned sports giants’ still nascent OTT service. And sources close to that deal have told THR that Fox is willing to pay about $175 million annually for the MMA promotion.

SmackDown has been somewhat of a migrant show during its existence, airing on Tuesday, Thursday, and Friday nights since its 1999 debut, while airing on UPN, The CW (which rose out of the ashes of UPN in 2006), MyNetworkTV, Syfy, and its current home, USA.