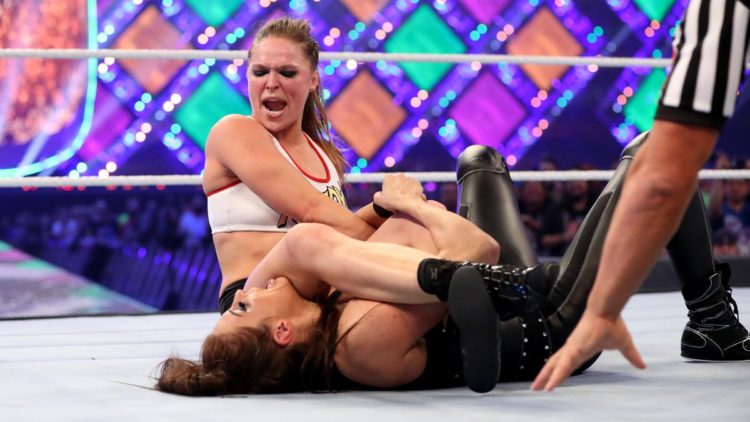 Over the last several weeks there has been a lot of speculation over the future of WWE’s television rights. While the pro wrestling giants have geared much of their business towards the importance of WWE Network, the weekly Raw and SmackDown programs are still of huge significance to the company.

The last time WWE negotiated a new rights deal in 2014, the company decided to re-sign with NBC Universal to continue airing Raw and SmackDown on USA Network and SyFy respectively. The announcement of less-than-expected rights fees sent the company’s stock price crashing down.

For this latest cycle, early reports indicate that WWE’s outlook could be very, very different. According to the Hollywood Reporter, NBC Universal is reportedly set to pay a big increase to continue airing Raw. However, WWE may still be able to also shop SmackDown to another network (presumably Fox) to gain even more revenue. If it’s true that WWE can get an increase from NBC for Raw and add a new deal to SmackDown from a new network on top of that, it could make Vince McMahon a much richer man.

Sources tell The Hollywood Reporter that WWE’s SmackDown is being shopped to various networks after NBCUniversal — whose USA Network airs the highly rated pro wrestling matches — declined to re-up its deal. NBCU is said to be focusing on renewing its pact for WWE’s Raw, another wrestling franchise, and that deal is expected to close at as much as three times its current value. NBCU and WWE declined to comment on the still-ongoing negotiation. Fox has been speculated as a home for SmackDown, sources say.

NBCU scored rights to SmackDown — the second-longest-running weekly episodic program in U.S. TV history — in 2010. At the time, the company is said to have paid $30 million for rights to the franchise. The show began airing that year on Syfy, with corporate sibling USA heavily promoting it. SmackDown moved full time to USA in January 2016, as the cable network home to Mr. Robot and The Sinner aired all three WWE shows: SmackDown, Raw and Tough Enough. It marked the first time that the top three shows were broadcast on the same network. SmackDown started airing live in May 2016, increasing the value for advertising during the wrestling show. At the time, USA aired five hours of live WWE programming a week; WWE programming currently airs two nights a week on USA. (Raw aired solo on USA from 2005 to 2016.)

SmackDown, which still boasts the sixth biggest audience among cable originals (including news programming), enters the open market as sports and sports entertainment (WWE wrestling is staged) programming has been fetching a premium given the live tune-in that comes with it.

The Fox connection has been in the conversation for months now with there even being rumor and innuendo that Fox could try to buy WWE outright. WWE programming is an obvious fit for the “new Fox” focused on sports and live events and SmackDown could anchor Fox programming on Tuesday nights.

If it does play out this way, it’s a dream scenario for WWE. Not only do they get to keep their long-standing relationship with NBC/USA, but they would also have the energy of another media conglomerate behind them in Fox. (And the money sounds like it will be pretty decent as well.)

And if it is Raw on USA and SmackDown on Fox broadcast television, the question then might become whether WWE decides to elevate SmackDown to being the unofficial “A” show. Throughout much of its existence, SmackDown has been seen as secondary to Raw, no matter how much WWE would do to present the two shows as equal. By airing on broadcast television every week, WWE could be motivated to stack SmackDown as much as possible.