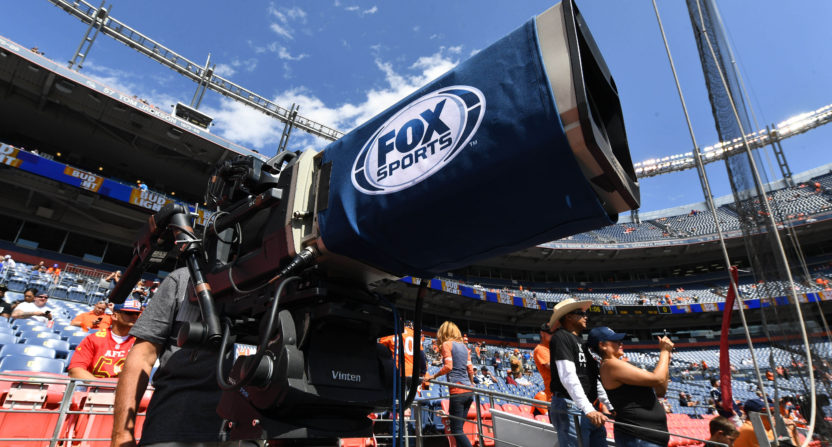 With Fox winning Thursday Night Football rights for five years, it marks a new turn for the network and the sports division. As recently as three months ago, 21st Century Fox CEO James Murdoch said there was too much football to watch, specifically pointing out the Thursday night NFL package:

What changed for Fox in the months since that comment? The big change was the sale of Fox’s entertainment assets to Disney, including its film and TV studios, FX, FXX, and various holdings in Asia and Europe. With Fox selling what was in essence a feeder to its TV networks, it needed other inventory. Fox would have to buy entertainment programming from other studios and that can be quite expensive.

To fill programming slots in primetime, live sports are a viable option to fill the void. Thursday Night Football and its eleven weeks of live games and shoulder programming can fill up an entire night, and it probably will not be the last sports property that will be used to occupy primetime windows for Fox.

The “New Fox” we’re seeing is already drawing comparisons to the network’s early days when it was a television upstart in the late 1980s and early 1990s, including from Patriots owner Robert Kraft.

Bob Kraft feels "new Fox" reflects 1994 Fox, when they first got NFL rights. Just one reason for going with them for Thursday Night NFL rights — building something new on strength of NFL

Fox is already using sports on Saturday nights during the summer and fall, utilizing MLB, NASCAR, and UFC from June through August and college football for the fall months.

While this season’s primetime programming is filled, Fox can start looking ahead to 2018-19. It knows it has the NFL locked up through 2022. Fox also has the Big Ten anchoring its college football coverage, along with MLB and NASCAR. Sports won’t fill up the majority of evenings, but going forward, expect to see more events in primetime. Could we see college basketball games moving from FS1 to Fox next winter?

The UFC’s rights also expire at the end of the year, and with Fox currently holding those rights, the MMA organization could possibly fill more nights with fight cards. WWE is also an option if Fox ends up taking over those rights, or even buying the company outright.

With cash from the sale to Disney, the new Fox has its eye on properties that could bring eyeballs to the network and help program its primetime schedule going forward. It’s going to be a long process for the transition from entertainment to sports, but Fox seems to be plowing ahead with plenty of vigor and enthusiasm.