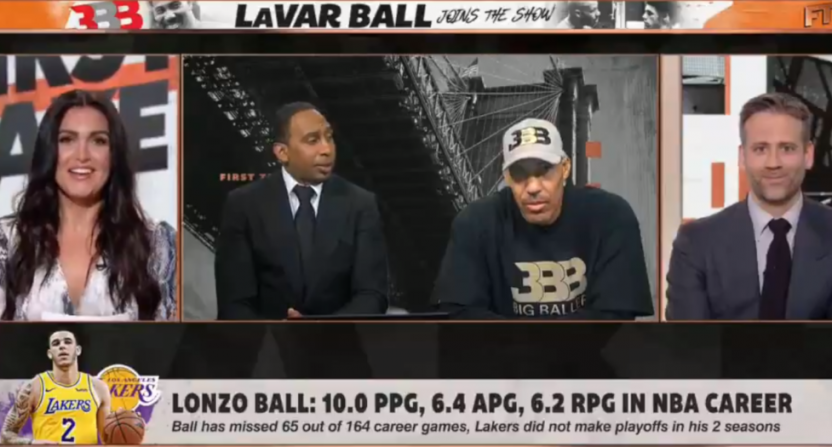 A common media cycle these days seems to be “give outrageous person a platform for no apparent reason, be shocked when they say something outrageous, then give them a platform again later,” and boy, is that ever the case with LaVar Ball. Ball is a regularly-controversial figure whose actual news value is extremely limited, especially following the collapse of Big Baller Brand, and there are parents of much more significant players we don’t usually hear from. But none of that stopped ESPN from inviting Ball onto First Take Monday (following his son Lonzo being one tiny part of the massive package sent to New Orleans for Anthony Davis), which predictably led to Ball doing something outrageous.

In this case, that was Ball making a comment to Molly Qerim that ESPN later called “completely inappropriate.” Here’s the comment, via Jorge Alonso of BroBible:, which sees Qerim say “LaVar, can I switch gears with you because I have a question here,” Ball respond “You can switch gears with me any time,” and Qerim reply “Let’s stay focused here”:

““LaVar Ball’s comment to Molly Qerim Rose was completely inappropriate and we made him aware of that,” a network spokesperson said.”

Meanwhile, a representative for Ball told TMZ Ball didn’t mean that remark to be “sexual in nature”:

LaVar’s rep, Denise White, is issuing a statement from the BBB camp … saying, “[LaVar] was asked if he wanted to switch gears, in his mind switching gears was ‘changing the subject anytime’ and he said, ‘yes, you can switch gears with me anytime.’ At NO time was that intended or meant to be sexual in nature.”

What’s really notable about this is how it’s just repeating the Ball cycle of stupidity, though. Again, LaVar Ball isn’t particularly relevant. He’s now just the father of one not-terribly-significant NBA player, one player who went undrafted by the NBA (and doesn’t even have a Summer League or G-League invite yet) after exiting UCLA following an international shoplifting incident, and one decent NBA prospect, a 17-year-old player headed to Australia after Lithuania (and LaVar’s own league) didn’t work out for him. And Ball has never been particularly relevant; his peak relevance was probably ahead of Lonzo’s #2 overall selection in the 2017 draft, but how many parents of high draft picks have ever received one national television appearance, let alone the eight from FS1 and three from ESPN Ball received in just over two months that year?

And by this point in particular, it’s well established that Ball is a blowhard who’s just going to say utterly absurd things. This isn’t even his first demeaning comment towards a female host; the May 2017 “stay in your lane” to FS1’s Kristine Leahy certainly qualifies there, and Ball’s response to that controversy was to sell t-shirts. And he’s said ridiculous things everywhere he’s gone, from CNN (multiple times) to NBC’s Today to ESPN’s post-game show to an ESPN.com piece that led to threatened ESPN boycotts from NBA coaches.

There is no actual value into providing Ball any airtime, especially at this point. His ridiculous comments aren’t even internally consistent, as Monday saw Ball saying he always wanted Lonzo in New Orleans and taking credit for that trade (despite him previously saying the exact opposite back in February). He’s failed at launching a shoe and apparel brand, he’s failed at making his kids Lithuanian stars, and he’s failed at launching his own league. And yet, networks and media continue to roll out the red carpet for him despite his complete lack of relevance or insight.

And while ESPN’s “completely inappropriate” statement is certainly something, and while that illustrates that they’re not particularly fond of what Ball said here, it’s notable that that comes with zero promises not to feature him again. And judging by the many past instances of Ball saying ridiculous or problematic things, taking criticism, and then just receiving yet more prominent platforms, it seems unlikely this will amount to much. Back in May 2017, after the “stay in your lane” controversy, Leahy offered her own wishes that networks would stop featuring Ball:

“I hope that yesterday showed who he is and that we stop putting him on all of these networks just to get controversial statements out of him because that is potentially what could happen,” she said. “And I think there’s no place for that in TV, no matter what kind of ratings you’re going to get.”

That has not happened. A search of just ESPN’s main Twitter account since May 17, 2017 shows 29 mentions of “LaVar Ball,” while Fox’s main account has had 41 in that time frame. A whole lot of those have been him appearing on shows, but some of it’s just personalities talking about him. And given that media outlets haven’t stopped talking about Ball or inviting him on after any of his previous blunders, why would they do so now? It’s all well and good for ESPN to tsk-tsk Ball’s comment here, but they should have known what they were getting. Maybe this will be a sign to stop providing a national megaphone to someone with nothing valuable to say, but that hasn’t happened yet, and it seems likely networks will keep finding excuses to put Ball on the air, regardless of what controversial thing he might say next.