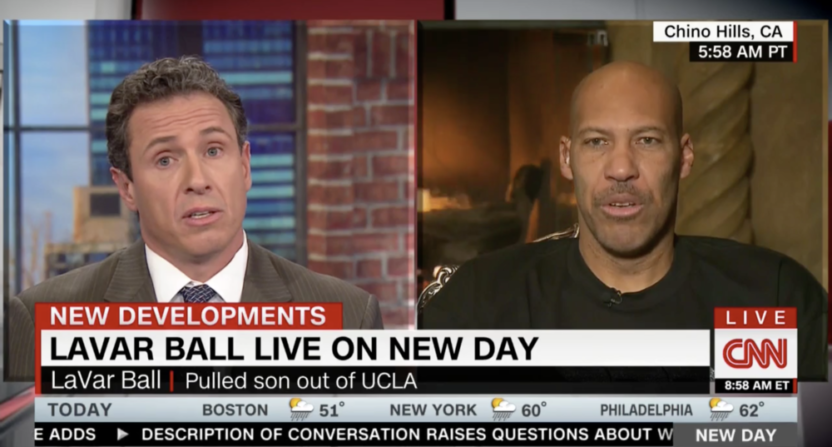 A day after LaVar Ball confirmed his son, LiAngelo Ball, will be taken out of UCLA, the Big Baller Brand founder was sure to make the rounds on the morning news cycle today.

Sure enough, Ball was popping up for interviews while you may have been drinking your morning coffee and scanning the headlines as you start your day. Staying on brand, Ball was not one to back down from his decision regarding the future of his son LiAngelo (or LaMelo).

LaVar Ball’s issues with UCLA are nothing new, but the bridge may have been officially burned between the father and program after this latest decision. After being arrested and jailed in China for theft while abroad with the team, LiAngelo was suspended by UCLA.

Frustrated by the entire situation with the school’s handling of his son, Ball pulled LiAngelo out of UCLA with the mission of seeking potential overseas playing opportunities for both his amateur sons and the younger brothers of Lakers star Lonzo Ball.

“China already said, ‘OK, he made a bad mistake, we’re gonna drop the charges. That’s the punishment they gave him, now we over here. And we gotta serve some more punishment?” LaVar said in an interview with the Today show on NBC, with LiAngelo sitting by his side. “He already fessed up for what he did. He apologized. What is the long process for? We only went to UCLA — one and done — to play basketball.”

With NBA teams reportedly having zero interest in LiAngelo Ball, the entire Big Baller Brand NBA dynasty LaVar has envisioned may be crumbling before him. Considering Ball has already flirted with NCAA violations simply by marketing LaMelo Ball under the Big Baller Brand, overseas playing opportunities may be all that is left for his two sons at this point.

As far as LiAngelo is concerned, LaVar says his son already paid the price for his actions in China, and he is aware of how long NCAA issues can loom over a player and a program. Ball is not going to sit idly waiting for a decision, and he cemented that stance during a morning interview with CNN’s Chris Cuomo.

Ball’s point about NCAA issues taking a while to resolve is actually pretty fair. The NCAA is not known for being an organization that rushes through their disciplinary actions, so the threat of Ball potentially being sidelined for an extended period of time before being given the green light to play is a real possibility.

However, it is still up to UCLA head coach Steve Alford to decide when to use an eligible player. It may be best for Alford to just not have to deal with the Ball family drama anyway, but there was no guarantee for when LiAngelo may have returned to the court anyway considering the circumstances.

Ball’s frustration appears to be stemming from a deviation from his grand picture of using UCLA for one season before LiAngelo headed to the NBA like his brother, Lonzo. By keeping LiAngelo off the court, LaVar sees a path to the NBA is in better hands with himself doing the guidance and training.

We’ve already reached a point of no return, it would seem. LaVar Ball certainly is not one to look back and regret a decision, and he is sticking to that identity regarding the decision to pull LiAngelo out of school to focus on other ways to prepare for the NBA.

But the most important question of the morning? Did President Donald Trump thank LaVar Ball for those red, white, and blue kicks LaVar sent to 1600 Pennsylvania Avenue? Ball knows Trump is thankful for those Big Baller Brand sneakers.