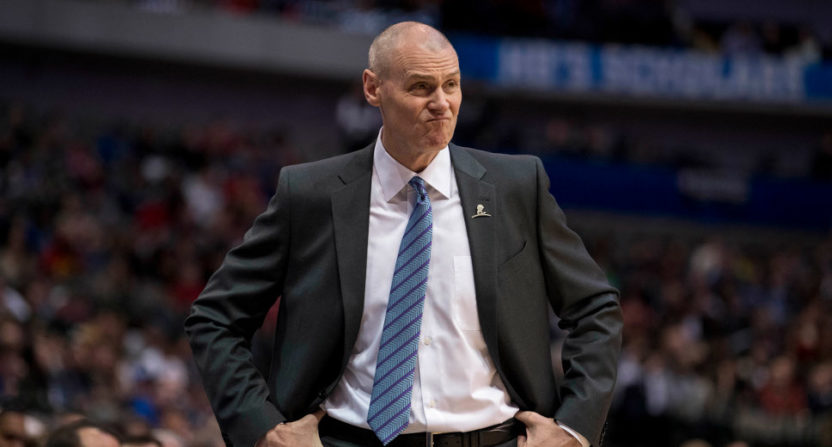 Dallas Mavericks’ coach Rick Carlisle’s rant Sunday about ESPN publishing a story with LaVar Ball’s criticism of Los Angeles Lakers’ coach Luke Walton drew a lot of backlash, especially when it came to his statement that “in exchange for [the access ESPN receives as a rightsholder], they should back up the coaches.” Despite that criticism, Carlisle has now doubled down, issuing a written statement on the National Basketball Coaches’ Association website, signed by him (in his role as the NBCA president) as well as by NBCA executive director David Fogel, that perhaps goes even further than anything he said to reporters.

ESPN and The Walt Disney Corporation have long served as a trusted partner of the NBA and the greater NBA family. NBA Coaches have valued this relationship with ESPN. They have willingly contributed to the network’s broadcasts by participating in “WIRED” segments during games and agreeing to meet with broadcasting crews in advance of games. These meetings provide crucial access and information that enhance the broadcast for viewers. This access has been granted because ESPN has always treated coaches fairly, objectively, and with respect.

Yesterday’s article by Jeff Goodman of ESPN.com regarding Luke Walton was a salacious one-sided story lacking journalistic integrity. The article attacked Coach Walton on the basis of one person’s unsubstantiated opinion. The story failed to provide quotes or perspectives from any players, or from Lakers management, either named or unnamed, verifying the claims made in the story. The article lacks any of the basic fundamental benchmarks and standards of reliable journalism. It is reprehensible and insulting both to our Coaches and to the standards of ESPN.

Luke Walton is working to develop an improving, young LA Lakers roster, which takes years. Luke is an excellent young NBA coach who proved himself in 2015 when, in Steve Kerr’s absence, he led the Golden State Warriors to a record of 24-0 to start the season, which has never been done.

It is regrettable and troubling that ESPN was willing to provide a megaphone for a player’s parent anytime he wishes to share his personal opinion. While the Coaches Association does not believe NBA Coaches should be immune from criticism, the NBCA demands that ESPN, and our other network partners, work harder to ensure a more objective and balanced account in their coverage.

Carlisle’s wrong here on a lot of levels. For one thing, publishing comments critical of someone isn’t “lacking journalistic integrity.” What about all the times ESPN and other networks carry coaches’ criticisms of officials, or of NBA decisions such as changes to the rules about resting players? For another thing, the NBCA shouldn’t be in a position to “demand” anything from ESPN, and specifically not “objective and balanced” accounts when it comes to criticism of coaches. Goodman’s piece was arguably already objective; it’s not an endorsement of Ball’s claims, just a note that he said them.

And adding in quotes from a Lakers’ player or coach that Walton is doing a good job doesn’t make this piece any more objective. For one thing, those quotes would be expected (especially if on the record), as it’s rare to see a player or assistant coach publicly bash even a struggling head coach. For another, doing so wouldn’t have been easy in this case given that Goodman was reporting from Lithuania. And beyond that, those quotes aren’t necessarily needed. Goodman’s piece came with the context of some of Ball’s previous silly claims and his previous attempts to interfere with the coaching of his son’s teams; it wasn’t a piece presenting Ball as an authority, or Walton as a bad coach, but rather one showing that Ball doesn’t like Walton (which is the newsworthy part here, as that might lead to friction between Lonzo Ball and Walton).

What’s really “regrettable and troubling” is the grandstanding Carlisle is doing here, and how he’s doing so in his role as the NBCA president and doing so against an easy target in LaVar Ball. Yes, there are lots of people who say they don’t want LaVar Ball coverage (but an awful lot of them still read things about him), and there’s some merit to that. But there’s a big difference between reporting newsworthy comments by Ball and between giving Ball a free platform to spew unedited hot takes (something ESPN has done in the past, but something they’re not doing in this instance).

And while the likes of Carlisle and Dick Vitale may love to criticize Ball and criticize ESPN for covering him, they don’t make themselves look good in the process, and they’re really only bringing more attention to Ball’s take here. In particular, it’s troubling that Carlisle thinks ESPN owes coaches positive coverage in return for the access they’ve paid dearly for (which helps to fund Carlisle’s $7 million annual salary from the Mavericks), and that he’s trying to use his NBCA bully pulpit to alter their coverage. That’s more worrying than anything ESPN’s done in this instance.