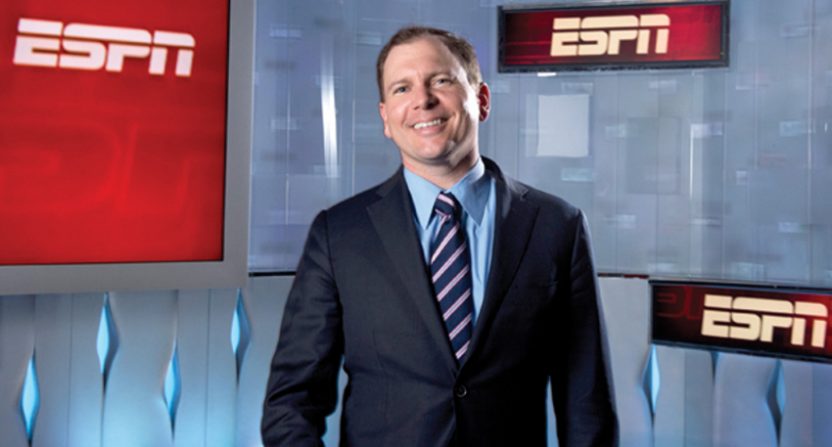 While decreasing numbers of traditional cable subscribers continue to affect the bottom line for ESPN (and are regularly cited as a negative factor in Disney’s earnings calls), the company has been playing up their inclusion in streaming and “skinny bundle” TV packages marketed to cord-cutters and younger cord-nevers (those who never had their own cable package). The latest streaming option is YouTube TV, which officially launched Wednesday in New York City, Los Angeles, San Francisco, Philadelphia and Chicago, and which features ESPN’s family of networks (along with the broadcast networks, but it’s missing Turner channels and league networks).

Wednesday’s YouTube TV launch led to ESPN Front Row running an interesting piece from Justin Connolly (seen above), the executive vice president of affiliate sales and marketing for Disney and ESPN Media Networks. Connolly leads a team that handles ESPN’s contracts with both traditional and new distributors, and he wrote about how key the new distributors are to the network’s overall strategy:

The Disney/ABC and ESPN networks are now available across every live streaming subscription service currently in the marketplace. This allows us to reach more people and, in particular, provide another attractive multichannel option for millennials. While Pivotal Research Group recently scored ESPN and Freeform among the highest of all networks in reaching this audience, we still continue to add options to expand our presence and availability to this group.

…We are doing more to navigate the changes in the marketplace than any other media company. Our digital usage and engagement continue to set records. We’re embracing technology and have an unmatched collection of all-encompassing rights to populate every existing and emerging platform. In addition to YouTube TV, we have completed deals with other partners, like Hulu, for additional digital multichannel subscription services which will launch later this year. Thanks to the great work from every group at Disney/ABC and ESPN, we are improving our competitive position and focusing on the future.

That’s a lot of spin without a lot of detail, of course, but it’s interesting that ESPN is running this kind of piece on their PR site. That’s yet more evidence they’re trying to push the conversation from the traditional subscribers they’re losing and the “cord-cutting is dooming ESPN” narrative towards one that says ESPN is still reaching these supposedly-lost subscribers. And that’s where Nielsen’s move towards total audience metrics becomes important; they’re now trying to track more different kinds of viewing (including streaming and out-of-home viewing, which has already bolstered ESPN’s numbers).

When those numbers are tracked more thoroughly, they may aid ESPN on a couple of fronts. If the network can prove it’s being watched by many more people than just those in the standard Nielsen ratings, that may help it sell ads for more money; advertisers will argue that non-traditional viewing is already priced in, but if the numbers are big and detailed, that could help ESPN get more for its slots.

Beyond that, if ESPN can show that they’re still reaching a lot of people and still getting subscriber fees despite losses in traditional cable subscribers, that may help assuage analysts’ fears about the network’s trajectory. Streaming is vital to ESPN’s future, and their strategy of trying to get into every streaming service possible has merit. And they’re not making cut-rate deals to do so; Awful Announcing has learned the digital deals are equal or better to ESPN’s deals with traditional distributors, and they also provide 100 per cent distribution on those streaming services. This piece is just one more bit of proof of their emphasis on these streaming services, and how they want the conversation to be about that.

It should also be noted how Connolly’s presence in this role, and discussion of these streaming agreements, relates to ESPN’s priorities. Connolly took on this head of distribution role in May 2015, following a stint as head of ESPN’s college networks (which included playing a key role in the very successful distribution agreements ahead of the launch of the SEC Network). Before that, he worked on ESPN distribution agreements with traditional cable providers, so this is a return to those kind of negotiations for him (and he still oversees those as well as the deals with new streaming providers). He was inducted into Sports Business Journal‘s 40 Under 40 Hall of Fame in 2015 for his work both on ESPN affiliate agreements and with the SEC Network launch, and is a key figure in the company. Having him not only lead streaming bundle negotiations, but also talk them up publicly, is yet more evidence of how much this matters to ESPN and to the company’s future.