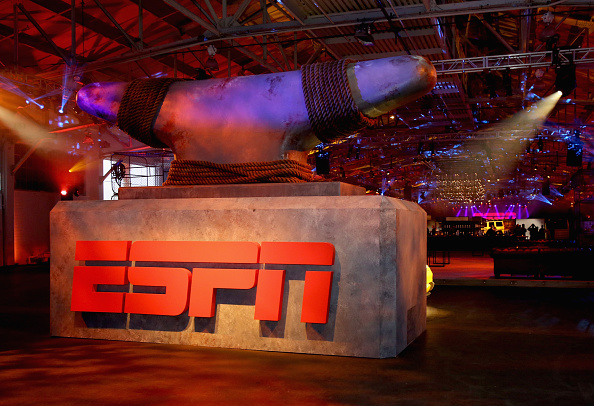 We are starting to see the first trickle of data coming through about out-of-home viewing for ESPN. A few months ago we heard that the network was seeing an increase for their live event coverage and things like the morning SportsCenter, but now we have some more complete data at our disposal.

Here are the first key numbers from ESPN, including a total day audience increase of 6.2% for the mothership and 4.1 percent for ESPN2.

Just how big of an increase is that? Well, 6.2% doesn’t sound like too much but given ESPN’s large viewership totals it’s fairly significant. Take last week for instance when ESPN averaged 896,000 viewers. Adding 6% in audience takes the number up to over 951,000 viewers, an increase of 55,000 viewers… or just about what Speak for Yourself with Cowherd and Whitlock draws on a regular basis.

* Surprisingly, the biggest venue for out-of-home viewing of ESPN was not bars and restaurants. Rather, ESPN reports that a survey indicates that only 25% of out-of-home viewing comes from those places. The majority of viewing came from gyms, waiting rooms, airports, and dorms. It goes against the conventional wisdom of the benefits of out-of-home viewing, but it does show the massive reach of ESPN. How many waiting rooms have you gone into and seen FS1 in? Probably not many. Skip Bayless is probably the last person I’d want to see before going in for a root canal.

* College football and the NBA were responsible for the biggest out-of-home viewership increases at 7.5 and 5.1 percent per day respectively.

* The much ballyhooed College Football Playoff semifinals on New Year’s Eve predictably registered a decent increase of 453,000 viewers, but perhaps not as much as one might expect, especially compared to other events. The playoff games weren’t even the largest increase in out-of-home audience during bowl season. In fact, the Rose Bowl added 1.1 million viewers, a 9% increase on the game’s total audience. But not even that topped the list for biggest increases. The event that drew the largest out-of-home audience in 2016? Believe it or not it was the Euro 2016 Final between France and Portugal that added 17% in audience totals. Long live your local soccer bar.

ESPN has been waiting on these numbers for sometime and they have predictably given the network a boost of confidence in an age where positive bottom-line numbers haven’t been easy to come by. Maybe more importantly, they show why ESPN has such a huge advantage over upstarts like FS1 or NBCSN or anyone else. ESPN is still the default sports channel for most establishments that have a television and until that changes it’s hard to see anyone else overtaking them in the sports media.