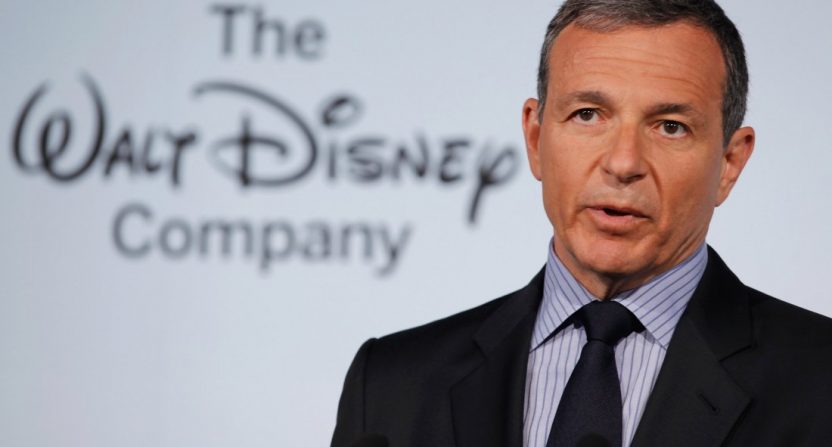 A Disney quarterly report has again missed analyst explanations, and they’ve again cited ESPN as an important reason why. We’ve heard that song before, from February 2016 (when they missed despite the company’s “greatest single quarter in history”) to May 2016 to November 2016 (interestingly enough, ESPN actually helped the Q3 numbers released in August despite subscriber loss, thanks to increased advertising revenue), and we’re hearing it again now with Disney’s release of their 2017 Q1 fiscal year earnings Tuesday.

Those earnings ($1.55 in adjusted earnings per share) actually beat the consensus analyst estimates of $1.49, but revenues were $14.78 billion rather than the expected $15.26 billion. Once again, ESPN was a big part of the reason why. Here’s the key part related to ESPN in that release, talking about how the results compared to Q1 2016:

Those decreases actually aren’t bad percentage-wise in the overall corporate scheme. For example, Cable Networks is only part of the Media Networks division, which also saw its revenues and operating income drop by two and four per cent respectively to $6.2 billion and $1.4 billion. Bigger revenue hits percentage-wise were seen in studios and consumer products/interactive media (seven and 23 per cent respectively), which also dropped in operating income (17 and 25 per cent respectively); that had a lot to do with Star Wars: The Force Awakens and Frozen finding more box office, merchandising and game tie-in success than this year’s (still-successful) Rogue One, Finding Dory and Moana.

Those studio and consumer product divisions also saw larger raw drops in both revenue and income. However, the media networks division is the biggest overall by both revenues and operating income. Thus, what happens in it is highly significant, and ESPN is the most notable part of it.

That was reflected on the earnings call Disney conducted with CEO Bob Iger and senior executive vice president and CFO Christine McCarthy. While there was significant discussion of theme parks, movies, merchandising and more, both had a lot to say about ESPN in their statements, and both were asked lots of questions about the network afterwards. Iger even brought up ESPN right off the get-go in his opening statement.

“We’re very happy with our results this quarter and we continue to be confident in our ability to drive consistent long-term growth,” he said. “We continue to address a dynamic, evolving media environment. …We’re certainly well aware of the attention paid to ESPN.”

Iger then went into commentary about how he’s pleased with ESPN’s strategies for addressing this new environment, citing investments in programming and mobile apps and their forthcoming over-the-top service (in partnership with BAM Tech), and saying he thinks the network is set up well for future success.

Of course, we’ve heard plenty of comments along those lines before, and whether ESPN is actually well-positioned is yet to be seen. The details Iger and McCarthy went on to discuss are interesting, though. For example, McCarthy mentioned that the overall media networks picture was definitely brought down by ESPN.

McCarthy went on to go through the various elements of ESPN’s decline, including boosts in those NBA and NFL contracts. She said  while the college football costs were down, that was thanks to the timing of those college football playoff games. She added that programming costs there will rise in Q2 of 2017 to reflect that.

“We estimate cable programming and production costs will be up about 16 per cent in the second quarter,” McCarthy said. “That’s in line with our expectation of eight per cent for the whole year.”

McCarthy later added that ESPN ad revenue was down seven per cent, and that while the college football move was the biggest factor there, there were also notable ratings declines for SportsCenter and Monday Night Football.

The most newsworthy moment from the call was Iger answering a request for comment on a recent story that he may not leave Disney in 2018 as originally planned. He said nothing has been decided there yet, but he’s open to staying longer.

On ESPN in general, Iger was bullish about their subscribers, especially the ones they’re gaining through distribution deals with new TV services. He mentioned that they have a deal with Hulu, and have signed another deal that they haven’t announced yet, adding that a nice part of these deals is how they’re for all homes covered by these services.

“There are some nice gains in subs that are not being counted by Nielsen,” Iger said. “The deals we’ve negotiated for distribution, particularly for ESPN, are all-subs, to be in all homes at launch.”

This is still a tough time for ESPN (and by extension, Disney’s media networks) relative to where they’ve been historically, though. This CNBC graphic does a nice job of illustrating that on the media networks front in particular: 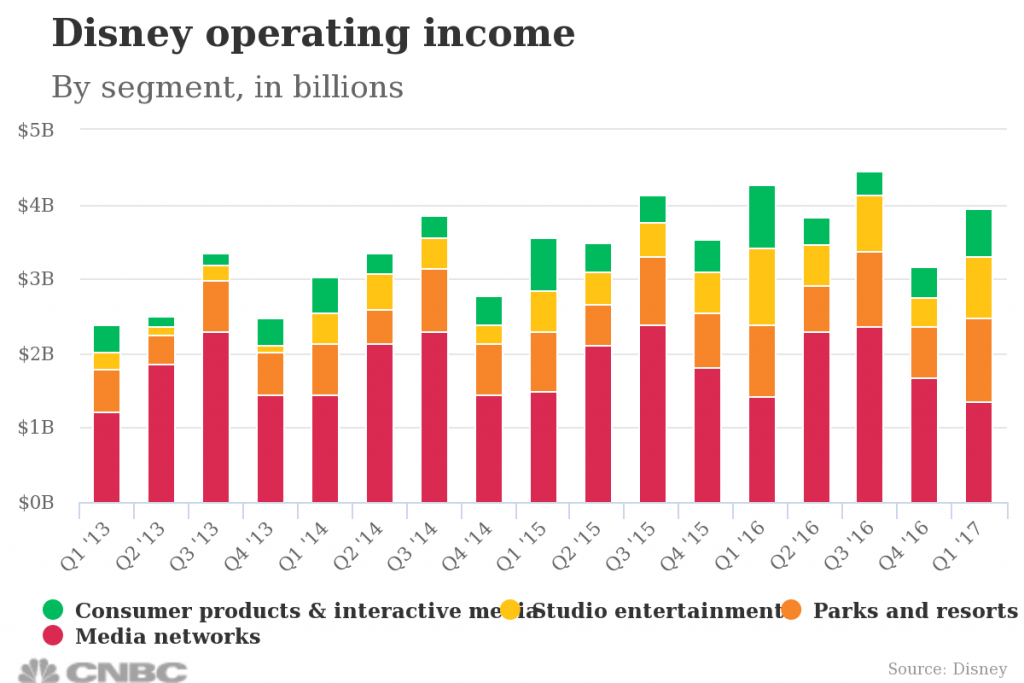 Iger also talked up the forthcoming over-the-top ESPN/BAM Tech offering, which he said they hope to release in “calendar 2017,” but he declined to provide a more specific timeline or pricing details.

“I just can’t comment about pricing,” Iger said. “The goal is to launch the platform sometime in ’17.”

Iger said he’s impressed with what he’s seen from that platform.

“I was at BAM Tech a couple of weeks ago and the quality of that technology has just blown me away,” Iger said. “We are extremely excited about the prospects of what BAM TECH is doing.”

While that service isn’t expected to include full ESPN at the start, Iger said there’s already a substantial amount of programming that can be aired on it.

He said ESPN and BAM Tech are likely to pursue even more programming for this new service, though.

“Our strong sense as partners and part owners is that we’re going to continue to go out and license more content for that entity.”

Iger said an over-the-top service will also help their advertising sales, as selling directly to consumers gives them more information on who’s watching, which advertisers want. However, he said the biggest key to success under new distribution models is still providing quality content.

“The best way to survive in a disrupted world is to have great content and tell great stories,” Iger said. “That includes ESPN.”