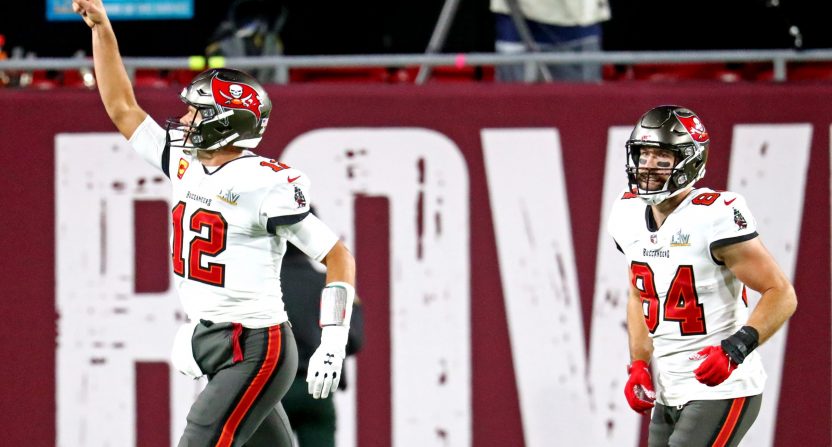 Call it the Curse of the Great Superdome Blackout. During Super Bowl XLVII in 2013 which aired on CBS, the Louisiana Superdome experienced a power outage that delayed the game by about a half hour.

Since then, CBS has had the misfortune of airing bad or dull Super Bowls. This was the third consecutive Super Bowl on CBS that was either bad, dull, or both. Super Bowl LV ended up being a 31-9 blowout for the Tampa Bay Buccaneers over the Kansas City Chiefs.

CBS had high hopes for the game. In his game open, Jim Nantz said, “I haven’t said this in a while, but this one could be one for the ages.”

Tony Romo replied, “I saw what you did there.”

Unfortunately for CBS, the game did not live up to the fortnight of hype.

CBS utilized more than 120 cameras for this year’s Big Game in Tampa. Some were situated in areas that normally house fans, so the network was hoping for some amazing shots and angles. Tampa Bay’s defense stifled Kansas City’s passing attack and that prevented a lot of replays from its trolley cam that was unveiled during the AFC Championship two weeks prior.

However, the network used its 8K cameras on the field, especially during the postgame celebration that provided some point-of-view shots that made them look super clear. It also made the subjects pop into your living room.

Romo, as usual, was on top of trends. As Kansas City’s defense was being hit with holding penalties, Romo quickly identified that the Chiefs were often guilty of holding receivers and noted that the officials were looking for them. He tried to provide hope that Patrick Mahomes had the ability to lead a comeback. However, as those chances dwindled while time was running out on Kansas City, Romo jokingly pleaded with Nantz to declare Tampa Bay the winners. If not, he would.

Romo also talked about the Chiefs losing two important offensive linemen before the Super Bowl and the impact it had on Patrick Mahomes. Throughout the game, Mahomes had little to no time to throw deep to Tyreek Hill as he did in the Chiefs’ regular season matchup with the Bucs.

Nantz offered one great tidbit at the end of the game, noting that Bucs coach Bruce Arians was a member of the NFL on CBS crew three years ago, calling games with Greg Gumbel and Rich Gannon. Nantz joked that Arians couldn’t speak freely, as he couldn’t use colorful language on the air.

As it became more obvious that Tampa Bay would win the game, Nantz and Romo transitioned into the historic significance of Tom Brady’s seventh Super Bowl win and whether his longtime teammate in both New England and Tampa Bay, Rob Gronkowski, would return.

Some other highlights of CBS’ Super Bowl LV coverage:

— While CBS said the Super Bowl would not air on Nickelodeon, its influence from earlier in the postseason was seen during halftime as Nate Burleson narrated highlights with the network’s elements, complete with Slime Zone:

— CBS unveiled new graphics, as well a new scorebug which offered new fonts and a different color for its network logo. 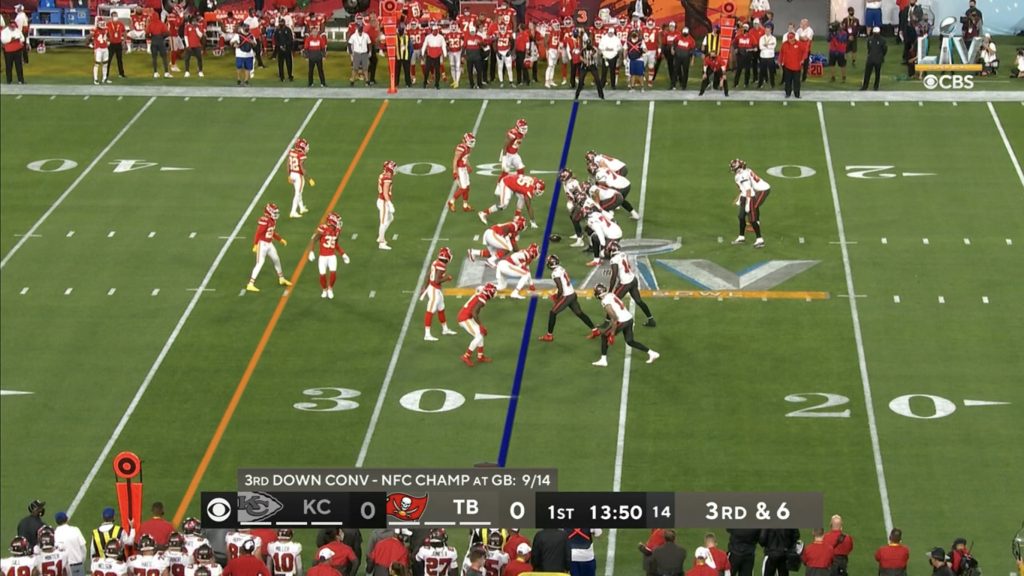 — CBS was quick with a graphic showing Brady and Gronk were the most prolific QB-receiver partnership in NFL postseason history. 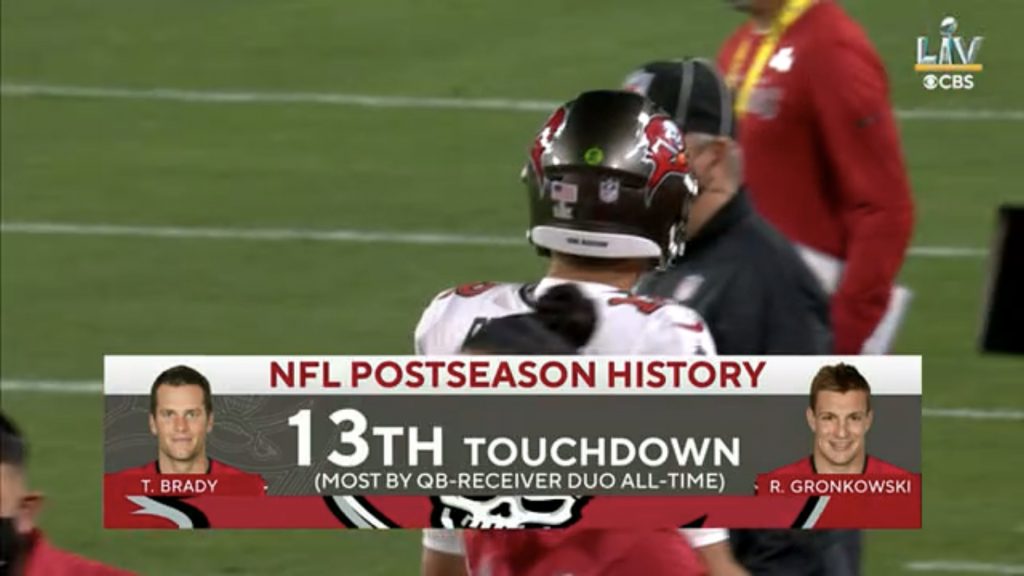 — CBS’ four-hour pregame offered a shorter Presidential interview. Normally a segment that runs about 10 minutes, CBS went about five minutes. And after some questions on COVID-19, kept it lighter than normal.

— Also during the pregame, CBS had a strong segment on the re-integration of the NFL in 1946.

"That was the moment the Black football player was invisible no more."@violadavis tells the story of Kenny Washington, who re-integrated the NFL in 1946. pic.twitter.com/tu7Zv0ZTwt

— That led James Brown to offer some comments about the NFL’s poor history of minority hiring.

— And finally, Bill Cowher was the only member of the studio crew to correctly pick Tampa Bay. 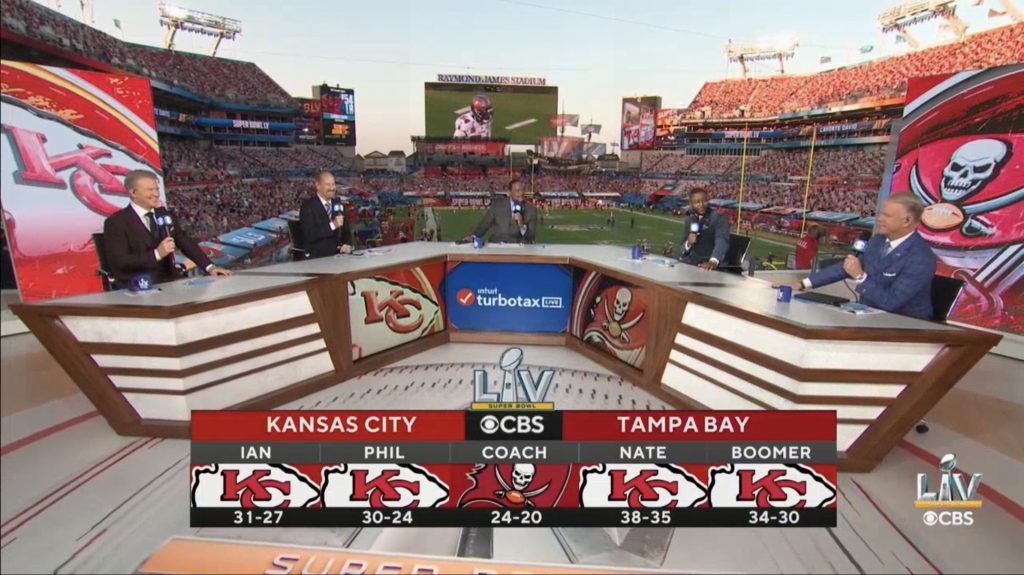 One glaring omission for most of the game was assistant coach Britt Reid’s accident that left a five-year-old girl with life-threatening injuries. Nantz and Romo didn’t discuss the story until late in the game when Nantz briefly broached the subject and then moved on. It was also touched upon in the pregame show, but like with the game, it was barely discussed before CBS went to other topics. The story deserved more than just a brief sentence.

Technically, CBS had a good game. It was clean and was free from glitches that had surfaced in Super Bowl 50. We got appearances from both sideline reporters, Tracy Wolfson and Evan Washburn. Kicking specialist Jay Feely got more than one appearance, and he was spot-on with his analysis of Kansas City’s special team woes during the game. And rules analyst Gene Steratore got to discuss the Chiefs’ goal-line stand; however, he didn’t get many opportunities to go over replay reviews.

CBS didn’t get the usual shot of the Gatorade bath of the coach leaving many viewers in the lurch.

Overall, CBS had a decent broadcast, but there wasn’t much it could do to lift up a stinker. CBS was hoping for an uplifting broadcast, and while it offered a lot of positives, the game didn’t rise to the occasion. CBS gets a solid B for its production which has been in its range over the last three Super Bowls.

Next year, NBC gets Super Bowl LVI in Southern California. NBC is likely quite happy that it traded with CBS to get that game after being originally scheduled to Super Bowl LV this year.