Good, bad, and ugly posts tend to naturally force writers to give the negative more coverage than the positive. Had NBC broadcast Super Bowl XLVII, that might have made things tough on me. But with CBS in charge and a 34-minute power outage in the mix, it was easy to find enough problems to fill the "bad" and "ugly" columns. This was not a smooth broadcast, but I did notice some non-terrible things, too, and I'll kick off the recap with those.

* The introduction featuring Joe Namath, Don Shula, Marcus Allen and other Super Bowl legends was pretty sick. I liked the CBS intro with Jay-Z and Rihanna three years ago, and they stuck with a classical remix this time, using Queen's "We Will Rock You." It was tasteful, well-produced and not too cheesy.

* I focused mainly on the game, but Boomer Esiason went in on Ray Lewis late in the pre-game and it was the best thing that came out of a CBS broadcaster's mouth the entire day or night. It's too bad Boomer had to jump over to the radio side and we never heard from him the rest of the night on CBS. Boomer's final comment on the CBS airwaves Sunday night: "This is not Ray Lewis' personal Super Bowl." Nice.

* I don't want to rip on CBS too hard for the way in which the talent handled the long stoppage from a power outage, and so in the "good" category I want to give credit to Steve Tasker, who was aggressively trying to get information to viewers. Tasker had to essentially host the coverage when Jim Nantz and Phil Simms lost power, and he did a very good job without any time to prepare.

* Some might consider this to be bad or even ugly, but I was happy to see CBS avoid discussing Lewis' history for the majority of the game. Nantz delicately addressed the double murder early in the fourth quarter. I don't think it deserved more than that single mention because Lewis wasn't a big factor in the game, but I do think casual viewers needed to hear it and I think it would have been better off coming earlier in the game. Still, I'm happy that Nantz and Simms generally didn't bother with such a tired storyline.

* CBS captured a very real moment between Joe Flacco and Marshal Yanda right after the game, and that moment included two four-letter words, including an f-bomb from Flacco. I'm not offended by such words and the majority of viewers are probably in the same boat, so it's good. It was an authentic moment.

* Nantz was pretty damn quick to suggest the Ravens take a safety on that final play from scrimmage, and he was bang-on. (Too bad Simms didn't agree with him.)

* The highlight of my night was Nantz' refusal to surrender the mic to Lewis during their post-game interview. He held on for dear life and a country is grateful. 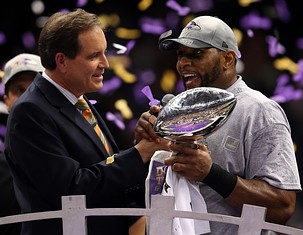 * It wasn't the best game for Nantz, but I also think he deserves credit for a solid call on Jacoby Jones' kick return touchdown to start the third quarter. His stats guy was on the ball, too, because Nantz was able to tell us that the return was the longest in NFL history only five seconds after Jones reached the end zone. Combine that with good analysis from Simms and it was the best play of the night for CBS. It was also probably the difference in this game.

* I'm guessing that CBS also avoided overkill on the Harbaugh brothers in an attempt to save us from an overplayed storyline, but I think they might have actually undersold one of the most incredible storylines in NFL history. I'm sure many of you will disagree, but let's remember that these guys have to cater to a very casual audience and brothers were coaching against each other in the freakin' Super Bowl. I would have liked to see a little more on the Harbaugh family history.

* “If Colin Kaepernick could not run the football, he would still be a top-five NFL quarterback.” Relax, Phil.

* Oh yeah, and Simms also inexplicably suggested that the 49ers remain conservative while trailing by 18 points in the second quarter. Say what?

* Haters finally rejoiced when they thought they had the moment they'd always been asking for when Simms was cut off while breaking down a play early in the third quarter, but instead the power had gone out in parts of the Superdome, causing an unprecedented 34-minute delay. Without voices, CBS cut to some shots of the roof, which showed half of the lights on and half out, before going to break unannounced. That was well played. Unfortunately, though, the analysts weren't ready to further break down a game they had just been breaking down at halftime. Shannon Sharpe and Bill Cowher were fine while discussing the Jones kick return, but beyond that they were just grasping at straws. Sharpe used the delay to try out some sort of comedy act and it flopped miserably. I think he used the same "the power surge is the Ravens" joke seven times.

* Bill Cowher at halftime: The 49ers have "no need to panic right now" and shouldn't deviate from what they've been doing. Bill Cowher during the power outage, which took place less than two minutes into the second half: "There's gotta be a sense of urgency and Alex Smith "may be able to be more efficient" than Colin Kaepernick. This is what happens when you've got nothing left to say and have time to fill. And of course, Kaepernick nearly led the Niners on an amazing comeback.

* The Ravens ran a fake field goal up 11 with three minutes to play in the first half and all we got was one full replay before the commercial break. Simms didn't say a single word about one of the most important plays of the game until after the break and the Niners' next play from scrimmage. And even then, we only got one more look. Considering the shock of seeing a fake field goal in the Super Bowl and the debatable call, it needed more discussion.

* After what was essentially the Super Bowl-clinching play for the Ravens defense in the final minutes, Simms was a disaster. It looked like a fairly obvious holding or pass interference penalty on Baltimore's Jimmy Smith. Simms suggested at first that it was a "good no-call," citing the fact that it was "late in the game." But then Simms began to backtrack. After more looks, he admitted that “the more angles I see the more confused I get," but still said "it's hard to throw a penalty in that situation."

* Simms was the target of much criticism after the game, receiving a shellacking from media writers around the country for his performance…

Richard Sandomir, New York Times: "Once the game resumed, Simms did not seem to draw inspiration from Beyoncé or studying highlights in the dark. He offered a trite truism about the 49ers, who were trailing badly: “When you’re down, you have to make great catches.” Simms then added this tortured analysis: “One thing I’ve taken out of this game, and really all through the playoffs, is if you watch it, the number of big plays in the games are because the quarterbacks are throwing the football.” (Yes, yes!) Arm strength, he emphasized, is important.

Tom Hoffarth, LA Daily News: "Simms was in the middle of explaining how San Francisco's Colin Kaepernick couldn't avoid a sack by Baltimore's Arthur Jones: "He is going to throw this down the middle to Vernon Davis. Watch. But look at the safety, he antic …" And then, nothing. Kind of like a World Series in San Francisco. That made almost as much sense as anything when Simms, who has called six previous Super Bowls for NBC and CBS coming into Sunday, seemed to have his own knowledge outage during what will be remembered as the Blackout Bowl."

Ed Sherman, Sherman Report: "I’m not sure why, but Phil Simms really was off his game Sunday. Following John Harbaugh’s decision to go with a fake field goal, Simms came back from commercial and said he wasn’t going to second-guess the coach? Huh? Isn’t that what an analyst does? The call was begging for more analysis, agree or disagree. You can’t be a network analyst in the Super Bowl, and shy away from weighing in on such a controversial decision. Big blow to Simms’ credibility, as evidenced by the reaction on Twitter."

Ken Fang, Fang's Bites: "Replays were sharp. The production was going well. Jim Nantz was Jim Nantz, calling a good game. However, Phil Simms was missing and perhaps CBS needed to issue an Amber Alert for him as he did not have his best broadcast. Simms did not step up for a big game, a rarity for him. Normally in the upper echelon of NFL analysts, Simms had a pedestrian performance. Several times Nantz tried to set up him, but instead, we received silence from Simms. I’m non sure what was going on in the booth."

Richard Deitsch, Sports Illustrated: "People will be talking about the broadcast on Monday (and beyond) and not for the right reasons. This crew has had much better games, and I say that knowing it faced challenges no other Super Bowl broadcaster ever has dealt with. The biggest problem on Sunday was Simms. He did not have a strong game, from his inability to let plays breathe (tweeted media critic and NBA All-Star Kevin Durant: "Feel like I'm playin madden, Phil Simms talkin to damn much.") to too often not providing clarity to the questions posed at him by Nantz. It took Simms forever to answer when asked if the momentum had changed during the delay, and on the final offensive play for the Niners, when Kaepernick's pass to Michael Crabtree fell incomplete after there was jostling between Crabtree and Ravens defensive back Jimmy Smith, Simms offered viewers confusion."

* I know this isn't a CBS thing, but it was quite ridiculous that CTV in Canada cut out of CBS' post-game celebration coverage in order to air the pilot for some new, crappy-looking series. Canadians went nuts on Twitter, because the simulcast was still trumping the local CBS affiliates. In other words, the entire country missed a large part of the celebration that followed the biggest sporting event of the year.