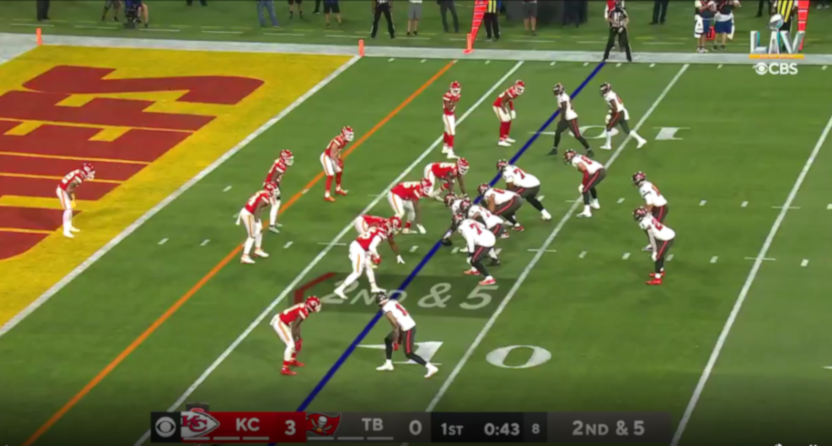 In the past few years, ESPN, Fox, and NBC have all rolled out scorebug changes for their NFL packages. CBS followed suit for Super Bowl LV with a graphics package change, including a new scorebug. Here’s how the new scorebug looks:

For the FIRST time in his career, Tom Brady throws a 1st quarter TD in the Super Bowl.

And it goes to his old buddy Rob Gronkowski.pic.twitter.com/6Dmn3ei4Bf

Here’s how the CBS scorebug looked last month during the NFC Wild-Card Game between the Bears and Saints:

If anyone ever deserved to be slimed, it’s Wims here: pic.twitter.com/Vxzf9Oexph

There are a few notable changes here. The most prominent may be the color change; the whole bar used to be CBS blue, and it’s now team colors for the scores and downs and distance, with the neutral information in black. The blue is only used for the “Super Bowl LV” when that shows up.

Beyond that, it looks like a different font, and the clock number now appears smaller than the other numbers (and also seems aligned lower in its box). There also are some interesting new transitions for the last few seconds of the clock (a draining sand timer) and for when teams score (a box out from the center of the score). Some of that feels similar to some of what CBS did for their Nickelodeon playoff broadcast of Bears-Saints (the same game seen in the previous clip). Here’s what the graphics there looked like.

The lines are actually moving during play pic.twitter.com/7O1dnK6OOT

This also bears some resemblance to the NFL on Fox graphics of the past few years, especially the look that debuted in 2017. Here’s what that looked like then:

This is probably the most tame FOX Sports scorebug I've ever seen. pic.twitter.com/UGBeCRuZYb

The Bucs lock up the Super Bowl berth. pic.twitter.com/OkufnzSFJQ

So this new CBS one looks closer to what Fox was doing a few years back. But it’s got its own innovations, including the animations. And it’s very different to see the shift from the long-used “CBS blue” to team colors and black.

What do you think of the new CBS scorebug? Leave thoughts in our comments, or tweet us at @awfulannouncing.