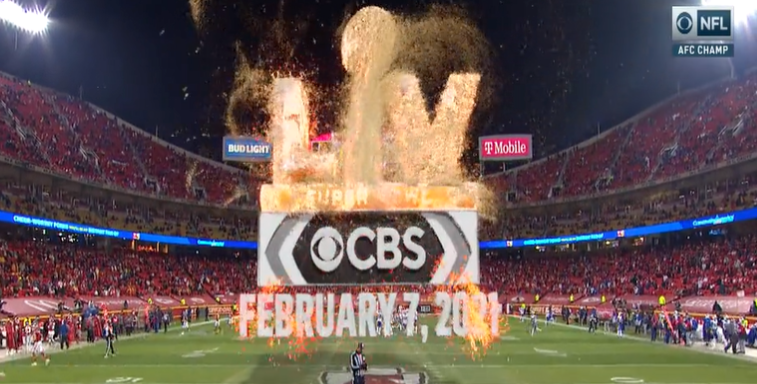 The Super Bowl is often a time for networks to go all-in on different visual approaches, from Fox’s 24 super-motion high speed cameras last year to CBS’ multiple 8K cameras and augmented-reality graphics in 2019 to NBC’s dual skycams and 3D body scans in 2018 to Fox’s virtual point-of-view replays in 2017. CBS has the Super Bowl again this year thanks to a 2019 trade with NBC (with the idea of letting NBC have the Super Bowl and the Winter Olympics together next year), and they plan to use more than 120 cameras and several unusual approaches for Super Bowl LV, as detailed in a press release they sent out Thursday. Here are some highlights from that release:

● TROLLEY CAM – For the first time ever live at the Super Bowl, CBS Sports will deploy the Trolley Cam. The Trolley Cam will speed from one end of the stadium to the other, ziplining along a wire and positioned to provide the viewing angle of a fan in the eighth row of the stands. The rig can travel up to 65 mph and will provide a look at the players from a vantage point not used in the history of the Super Bowl.

● VENICE CAMERAS – CBS will use several on-field cameras to capture a dramatic cinematographic feel. Two Sony Venice cameras will be used for the first time ever live at a Super Bowl.  The Venice, which is normally used for cinema-style applications like commercials and movies, will use full frame imager shot in a short depth feel to give it that unique look.  The cameras, provided by Inertia Unlimited, will be operated on a traditional steadi-cam rig, as well as a MOVI rig to capture the flare of the action in what has been described as a 3D video game look.

● MOVIE BIRD CRANE – A 53-foot Movie Bird crane, traditionally reserved for major motion pictures and television productions will be located on the upper concourse to give dramatic sweeping shots of the THE SUPER BOWL TODAY pregame set, game action as well as serving as one of the many augmented reality encoded cameras that will be strategically placed throughout the stadium.

Beyond that, CBS will have 12 cameras with 4K and 8K capabilities spread around the stadium that will be used for close-ups, and a new element there is having some of those from “near-field height.” One advantage of having just 22,000 fans at the game thanks to COVID-19 precautions is that there’s some more flexibility with camera deployments and angles, as we’ve seen at many limited- or no-fan games this year. But COVID-19 does pose challenges for broadcasters too; CBS plans to have their on-site staff more spread out than in normal times, and many of their employees will again be working remotely for this broadcast.

To protect the health and safety of our entire crew, CBS Sports will continue to utilize alternative production methodologies that have been refined and enhanced during the course of this season. While keeping the viewer experience unhindered, extra mobile units will allow for person-to-person social distancing. Remote replay operators will provide instantaneous footage playbacks from home, and dozens of other editors, graphic operators and show production personnel will work remotely from the CBS Broadcast Center in New York City.

It’s going to be a very different Super Bowl thanks to some of those precautions, which will also include play-by-play announcer Jim Nantz and color commentator Tony Romo not seeing each other at the event until they get to the broadcast booth. But there are still a lot of plans here for unusual and interesting visuals, which also will include animations, in-game graphics and augmented reality around this Super Bowl’s “sand and sea” theme (as seen in the promo graphic at top). We’ll see how these broadcasting plans work out for CBS.