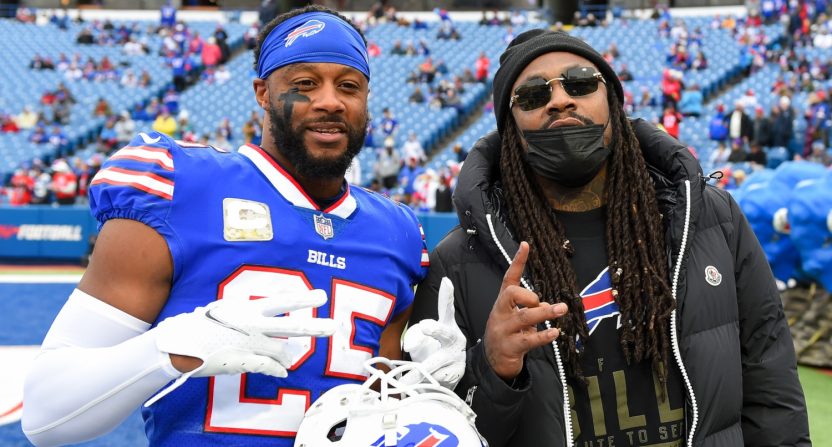 Marshawn Lynch will be part of Prime Video’s Thursday Night Football broadcasts after all, but not always as part of their studio show or panel. The main contributions from Lynch (seen at right above with Buffalo Bills‘ RB Taiwan Jones last November) will be three-to-four minute features, tagged “‘N Yo’ City”  and featuring something specific to the host city. Amazon vice president of global sports video Marie Donoghue revealed that to Andrew Marchand and John Ourand on The Marchand And Ourand Sports Media Podcast this week:

CLIP: Marie Donoghue on what Marshawn Lynch will do on Amazon’s Thursday night pregame.

“Starting this Thursday, we’ll have Marshawn Lynch. Marshawn will not be on set with us each week, he’s primarily going to be doing some pre-taped segments, which will be really fun. He’s going to go out into the community with sports fans. This week, I think we’ve got him playing football with some of the Highland Park kids [a neighborhood hit by shootings this summer] in Chicago [ahead of the Washington Commanders–Chicago Bears game]. Coming up, we’ll have him feeding alligators [ahead of the New Orleans Saints–Arizona Cardinals game next week]. He’s just a riot.”

“I know he and Sherm [Lynch’s former Seahawks’ teammate Richard Sherman, a regular part of the Prime Video TNF studio coverage) will have some fun, we won’t be able to keep them apart. I know it’s a huge roster, but we’ve got a lot of time; we’ve got a pregame show of an hour, we’ve got halftime, we’ve got a 10-minute postgame, and then we’ve got TNF NightCap, which we love. Already we’re holding ratings really long because of that long postgame show. We aspire to be one of the best in the business, and I think we’re close already.”

Amazon Prime Video has targeted Marshawn Lynch, The Post has learned, as a feature reporter and analyst for its exclusive “Thursday Night Football” package, which will begin next season.

Lynch is envisioned by Amazon as a potential part of a more relaxed studio-type show, as well as conducting interviews, according to sources. Lynch, 36, could do reports about the city the games are taking place in, utilizing his sense of humor.

So it sounds like the feature part of that has come true. But there may not necessarily be much on the studio front; although Donoghue seemingly hinted at having Lynch interact with Sherman in some way, it’s unclear if that will be in studio or in pre-taped segments.

It is interesting to see Lynch brought in five games into Prime Video’s TNF season. The first logical thought there is that that might be over his DUI arrest in August. Aqib Talib previously “stepped aside” from the Prime Video coverage (before ever appearing on it) following his brother’s murder charge and claims he started the brawl that led to that shooting death.  But Donoghue told Marchand and Ourand elsewhere on that podcast that Amazon “never walked away” from Lynch, as Marchand writes:

“I think Marshawn wanted to work through some things,” Donoghue said on the podcast. “We were already working with him. We never walked away. We just worked through some things with him and we’re excited. We can’t wait for him to join.”

We’ll see how these features with Lynch go. For someone who once declined to talk to the media with “I’m just here so I don’t get fined,” it’s interesting to see him becoming a media figure, and he certainly remains popular amongst NFL fans. And his ManningCast appearance last year was notable, and not just for the f-bomb. It will be worth watching to see what he brings to Thursday Night Football.