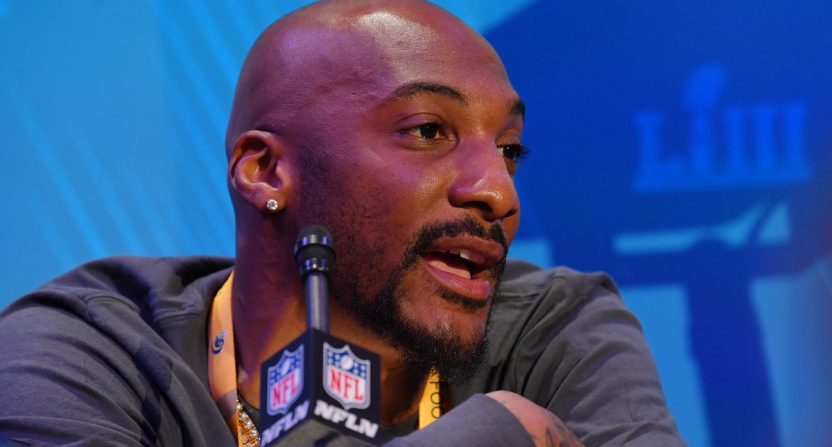 According to NFL Network’s Ian Rapoport, Aqib Talib will be “stepping away” from his role as part of Amazon’s “Thursday Night Football” studio team following a deadly brawl in which his brother, Yaqub Talib, was identified as the shooting suspect and has been charged with murder.

Just spoke to Aqib Talib. In light of the recent tragedy, he is going to step aside from his broadcasting duties at Amazon to spend time with his family.

Talib has also been reported to have been involved in the brawl, which took place during a youth football game in Lancaster, Texas.

“Upon arrival, officers were notified of a disagreement among coaching staff and the officiating crew. During the disagreement the opposing coaching staff were involved in a physical altercation and one of the individuals involved in the altercation discharged a firearm striking one adult male. The victim was transported to a local hospital for treatment where he was later pronounced deceased.”

WFAA (an ABC Dallas affiliate) then shared a video of the moments before the deadly shooting and included in their report that witnesses said that “a person wearing a hat and white sneakers in the video is former NFL cornerback, Aqib Talib.”

Other witnesses of the brawl also told reporters that Aqib “started” this and “was the first person to throw a punch,” according to Jason Whitlock.

Aqib Talib’s attorney, Frank Perez, disputed the account to Whitlock, saying “that story is inaccurate. You need to talk with all of the witnesses, not just the opposing coaches. I will be more than happy to make a statement at the end of the week when we’ve conducted a full investigation.”

Perez also shared a statement with WFAA reporter Rebecca Lopez, saying that his client “was present when this unfortunate incident occurred and is very distraught and devastated over this terrible loss of life. He would like to convey his condolences to the family of the victim and to everyone who witnessed this unfortunate tragedy.”

Amazon has not commented on Talib or his decision to step away as of yet. It’s unclear if this means Talib left of his own accord, if Amazon fired or suspended him, or if this move is temporary until the legal situation gains clarity.

The five-time Pro Bowler and Super Bowl champion was part of Amazon’s NFL coverage in 2021 before joining their TNF studio team.