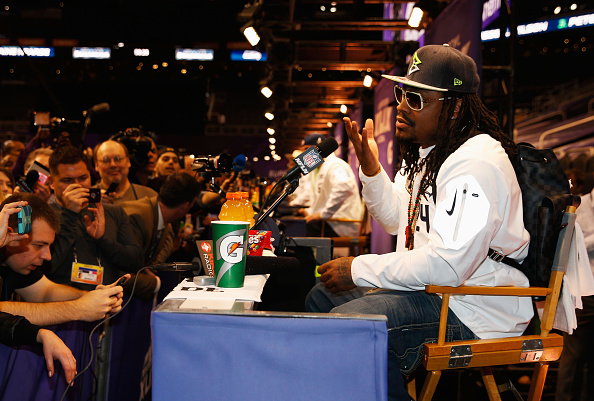 Super Bowl Media Day was as big of a clown show as ever this year.  Of course, one of the star attractions was the one player who didn’t want to be there – Marshawn Lynch.  The Seahawks RB and his laconic personality stonewalled every question sent his way.  Naturally, that led to many NFL media members blasting Lynch for his being so difficult and making a mockery of the process once again.  And it also led to many voices outside traditional media blasting the media for blasting Lynch.  Still with me?

Two of our writers on different sides of this Lynch dynamic wanted to share their viewpoints on why his antics are hurtful and set a terrible precedent in the athlete-reporter relationship and why reporters should just get on with their jobs and let Lynch be.  Brad Gagnon is a member of the PFWA and covered the NFL for several years and writes for Bleacher Report, CBS Sports, as well as AA.  Andrew Bucholtz runs the Yahoo Canada CFL blog and is an AA staffer.  Both are well steeped in journalism studies, but come to this story from two different perspectives.  Before you take a side (and a side must be chosen in “Marshawn Lynch vs The Media”) here’s two thoughtful essays on the matter.

Whether he likes it or not, Marshawn Lynch is a public figure and a role model to thousands. People crave information about superstars like him. He doesn’t owe any of us that information, but he signed a contract that contained media stipulations for that exact reason.

Skilled media professionals find ways to glean useful tidbits and/or anecdotes from their conversations with their subjects. Few of the reporters at Media Day possess that skill, but some do. Lynch doesn’t have to be an open book, but those correspondents who have either been assigned to talk to Lynch or feel an onus to do so in service of their audience deserve more than what he’s offering.

Now, by taking the podium and stating that he’s just present in order to avoid fines, Lynch is meeting the minimum requirements outlined in his contract. That makes this less of a rules and regulations issue and more of a predicament in principles. He’s still spitting in the face of the spirit of those requirements.

Not to get all philosophical on you, but at a broad level the media is supposed to represent its audience. Pop culture often casts us as villains, but I do believe that most of my colleagues in the sports media realm do their best to serve as conduits between fans and players, coaches and owners.

A lot of the folks who know Lynch say he’s got a great personality. We had glimpses of that earlier in his career and we witnessed it recently in an endorsement he did for Skittles. Instead, Lynch appears to be deliberately making himself the center of attention, which strikes me as an odd thing for a man to do when he’s so concerned with his privacy.

If he really wanted to dodge the media, he’d speak to us the way Bill Belichick and Tom Brady do. Serve us platitudes and mumble three-word answers and we’ll eventually get bored and walk away, but boycott or abbreviate media sessions and give silly answers and you force the very media you supposedly despise to give you more attention.

Maybe that’s what Lynch wants. Maybe he’s attempting to make a statement about the league’s media policies. And if he wants to do that by giving us the “I’m here so I won’t get fined” answer 29 times in less than five minutes while otherwise adhering to the letter but not the spirit of the league’s rules, that’s his prerogative.

I’d imagine a more productive approach to such activism would be to become an NFLPA player representative and to lobby for media policies to be reconsidered as part of the next collective bargaining agreement, but clearly Lynch — in the ultimate irony — would rather act out in public.

Why, then, should the league and the Pro Football Writers of America care if Lynch shows up at all? Consider the precedent that would otherwise be set. I don’t think a lot of people realize how little these players care about doing media. If we shrug our shoulders and let Lynch go MIA, the floodgates could open up for players to blow off their media obligations going forward.

A lot of those same players who despise doing media actually wind up giving us informative and entertaining quotes and sound bites throughout the year, which is why the requirements are in place. Most jobs require employees to perform tasks they’d rather skip. Why should NFL players be exempt from that reality?

Thanks to the NFL and the popularity the league has gained partly as a result of the very media exposure he purportedly fears, Marshawn Lynch is rich and successful beyond most of our wildest dreams. Is it really too much to ask for him to placate us minions with an assemblage of clichés a few times a week for half the year, or to give us three run-of-the-mill media sessions in the event that his team makes the Super Bowl?

The media’s being stubborn here for a reason, but they aren’t the ones complicating this situation.

Andrew Bucholtz: The Media Should Just Get On With It

Some of the media anger at Seattle Seahawks’ running back Marshawn Lynch for refusing to answer questions ahead of the Super Bowl is understandable. Talking to the media has been a long-assumed part of the job for athletes and coaches, and those media members are trying to do their job too. However, the furor of criticism that’s been unleashed at Lynch both goes too far and misses the mark.
First off, what useful information would Lynch actually provide if he was forced to give answers beyond “I’m here so I won’t get fined?” It seems highly unlikely he’s going to give out the Seahawks’ strategies for Sunday, and given his apparent distaste for the media, does anyone really expect him to give them useful information about himself? If Lynch did talk, he’d most probably only spout clichés, and the world really doesn’t need to hear any more of “We’ll take it one play at a time and give 110 percent.”
Second, it’s not like anyone is stopping media members from discussing Lynch despite his lack of quotes. Some of the greatest profiles ever have been written without access to the star, and many have productively written about Lynch without talking to him.  That can be done in numerous ways; how about a film-based breakdown of what makes him a good running back? A discussion with his teammates about what Lynch does for the Seahawks? Thoughts from his family and friends on his background and who he is? None of that requires you to get quotes from Lynch.
Third, why not go a little further off the beaten track? The frenzy about Lynch is evidence of the worst kind of pack journalism, where everyone talks to the same players, gets the same few insipid quotes and turns them into similar boring stories. That’s nothing new at the Super Bowl, either; the great Hunter S. Thompson described the scene perfectly in 1974, discussing how many of the writers in attendance would hang out in the bar, take quotes from the local papers and rework them into their stories rather than going to talk to people themselves. Why not be more adventurous, talking to less-prominent players and getting a more unique piece? Everyone’s following Lynch, Tom Brady, Russell Wilson and so on, but there are lots of fascinating guys in this game, each with their own story. There’s no need to try to drag cliches out of an unwilling Lynch when there are better stories out there.The thought that Lynch is somehow doing a disservice to his fans by not talking to the press is also off the mark. Media are not really fans’ representatives in this day and age, and there are plenty of fans who don’t care if Lynch ever says a word to the media. This furor is from media people upset that they can’t force Lynch to talk to them.

Unwilling interview subjects are something reporters in most other fields have to deal with, so why is this such a dire circumstance for sports reporters? There still are plenty of ways for them to do their job and produce a better result than they would have if they’d pulled empty cliches out of Lynch. If every player were to follow suit, then this would be a media issue. For now, though, Lynch’s boycott seems more potentially helpful than harmful to the media as a whole. Maybe this will cause some to get creative and look beyond pack journalism and its cliches.