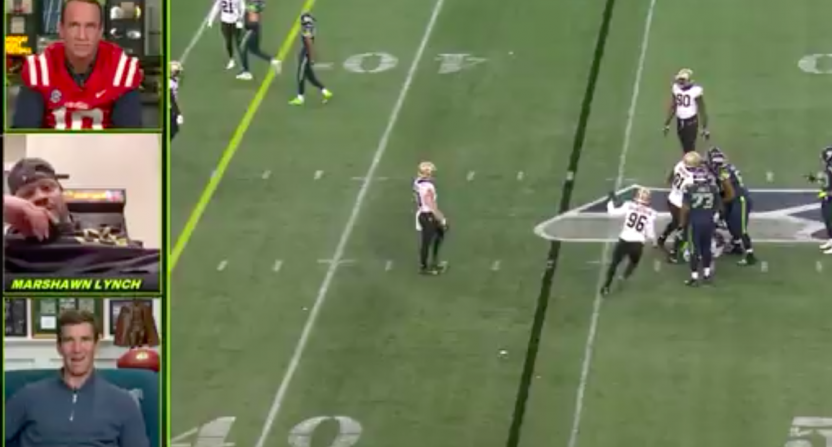 It has only existed for a few brief weeks, but we’ve come to expect certain things from ESPN’s ManningCast during Monday Night Football.

We expect to hear some fun anecdotes from Peyton Manning and Eli Manning about their careers. We expect to see some notable guests show up and hang out with America from their living room or weird home broadcasting setup. And we expect someone to curse or give us the middle finger.

We’re early in Monday’s broadcast of the New Orleans Saints vs. Seattle Seahawks but we’ve already gotten everything we’ve expected and more.

We got our first fun moment, about how Peyton needed to wear Eli’s Ole Miss jersey because Eli’s Rebels beat Peyton’s Tennessee Volunteers two weeks ago.

Peyton had to wear an Eli No. 10 Ole Miss jersey because the Rebels beat Tennessee 10 days ago ? #ManningCast pic.twitter.com/myyIzjL5KG

And then we hit the jackpot as Marshawn Lynch joined the Manning brothers during the first quarter and very quickly hit the F-bomb quota.

And with our first F-bomb of the evening, #ManningCast is BACK! pic.twitter.com/aJB1YQF3yH

“Protect that ball. Protect it,” answered Marshawn, right before the ball was snapped, the ball came loose, and quarterback Geno Smith did a 360 to dive on top of it while whistles blew. “What the f***,” Lynch rightfully asked right before realizing he was on national television.

Peyton and Eli, pros at this sort of thing already, went into broadcasting beast mode and just kept moving forward.

Let’s be honest, ManningCast didn’t officially feel like it was back until that moment. Thanks, Marshawn, even if Peyton had to apologize for it afterward.