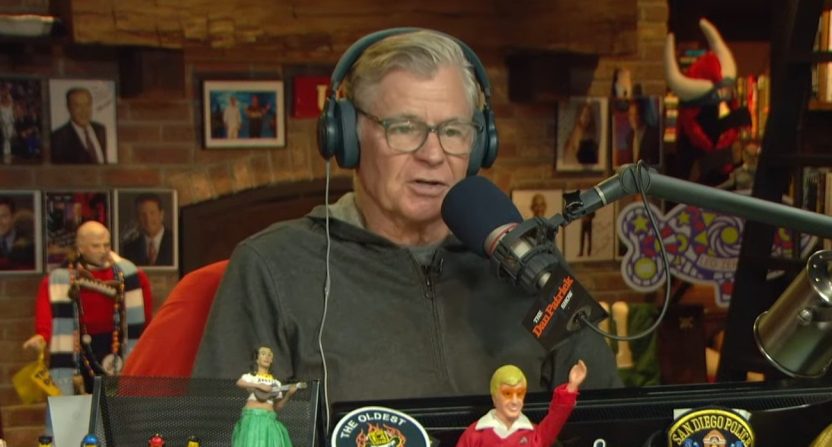 The possibility of Charles Barkley joining LIV Golf appears to be getting real and it might be coming at the expense of his role on TNT’s Inside the NBA.

According to sports radio host Dan Patrick, Barkley is planning to meet with higher ups about a media position with LIV Golf Wednesday night. And if Barkley likes the nominal figure presented to him, it could mean the end of his more than two-decade-long tenure on Inside the NBA.

Dan Patrick says he was told by Charles Barkley he may need to leave TNT if he joins LIV Golf pic.twitter.com/2brmHS39K0

Last week, Barkley told The Next Round show that he was planning on talking with LIV Golf about a media role, but he may have downplayed the potential meeting by claiming he had no details about what the position would be.

“I’m going to meet with LIV,” Barkley said last week. “They called me and asked me ‘would I meet with them?’ And I said yes. Nothing that’s imminent, I actually don’t know everything they want from me, or what they technically want me to do, but you’ve got to always look at every opportunity that’s available. So the answer to your question is, 100 percent yes, I’m going to meet with LIV.”

Without knowing “what they technically want me to do,” Barkley appears to at least know they might want him to leave Turner, or that Turner won’t want to be associated with someone who works for LIV Golf. As LIV Golf poaches talent from the PGA Tour and attempts to build a viable team of broadcasters in hopes of attracting a TV deal, those who choose to associate with the Saudi-backed golf league have been widely criticized. If Barkley joins LIV, he won’t escape similar criticism, regardless of his popularity.

LIV is majority-owned by Saudi Arabia’s Public Investment Fund and everyone associated with the league has been accused of helping the Saudi government sportswash their deplorable human rights abuses. Barkley, however, has supported golfers who choose to chase the nine-figure offers being handed out by the Saudi-funded tour and recently went so far as to say, “if somebody gave me $200 million, I’d kill a relative.”

While I assume his relatives will be saved if Barkley chooses to join LIV, it appears that the biggest blow to a potential deal might be felt by his Turner Inside the NBA co-hosts, Ernie Johnson, Kenny Smith and Shaquille O’Neal.

“I’m just putting it out there, what I was told this morning. Charles knows he may have to leave TNT. That would be bad for everybody,” Patrick continued. “If Charles Barkley would leave TNT and go to the LIV Tour, that’s a BIG DEAL. That’s not growing the game, now you’re taking away from the NBA with this. This has nothing to do with golf, per say.”

Patrick was stopped by Seton O’Connor, one of the Dannettes, who asked why Barkley would have to leave TNT if he joined LIV Golf.

“I don’t know,” Patrick admitted. “Charles is the one who said it.”

Meaning, Patrick’s source on Barkley possibly leaving TNT and Inside the NBA is Barkley himself. Turner likely can’t compete with the Saudi PIF if they choose to offer Barkley a monster contract. But depending on Barkley’s contract with Turner, could they stand in the way of him leaving for LIV Golf, or would they just accept a large buyout from the Saudi-funded league? But before jumping to ‘how will Turner fill the void,’ let’s wait and see how Barkley’s rumored meeting goes Wednesday night.