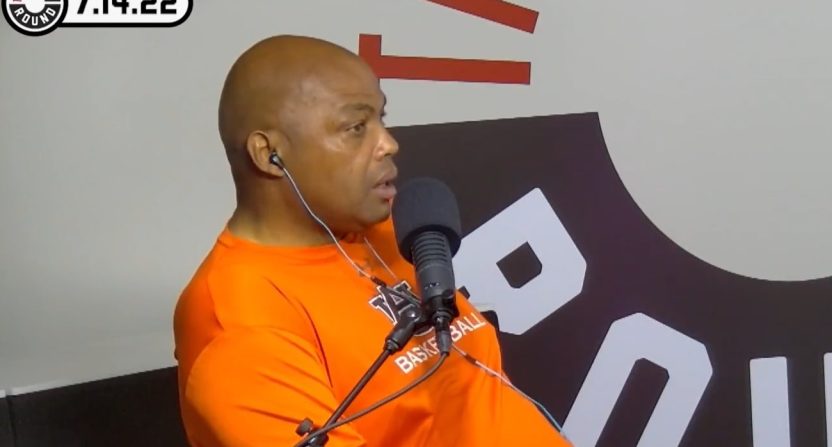 Charles Barkley is constantly complaining that he wants more money and LIV Golf has shown a willingness to pay people a lot of money. Seems like there could be a potential match.

Barkley joined The Next Round for an interview on Thursday, formerly known as The Jox Roundtable radio show which originated in Barkley’s home state of Alabama. During the segment, co-host Ryan Brown asked about a rumor he heard regarding LIV Golf targeting Barkley to be “a face of their media.” And as Barkley often does, he provided an honest answer.

"The answer to your question is 100% yes. I'm gonna meet with LIV." On today's show, Charles Barkley joined us in studio and confirmed that he will be speaking to Greg Norman about a role with LIV Golf. @NoLayingUp @RiggsBarstool @barstoolsports @GOLF_com @GolfDigest @GolfChannel pic.twitter.com/AOMQJRoKZB

“I’m going to meet with LIV,” Barkley admitted. “They called me and asked me ‘would I meet with them?’ And I said yes. Nothing that’s imminent, I actually don’t know everything they want from me, or what they technically want me to do, but you’ve got to always look at every opportunity that’s available. So the answer to your question is, 100 percent yes, I’m going to meet with LIV.”

Barkley is one of the most popular and recognizable analysts in sports media for his work on TNT’s Inside the NBA. The brash personality has served as an analyst for The Match and he’s also infamously known for some putrid golf swings, but it’s hard to imagine that he would move the needle in terms of convincing avid PGA fans to watch LIV on its YouTube stream. Barkley might be more useful in attracting sports fans who have a casual interest in golf and are less concerned about informative analysis.

That’s no matter for Barkley, however. The basketball Hall-of-Famer has been supportive of golfers such as Bryson DeChambeau, Dustin Johnson, Phil Mickelson, and others as they chase the nine-figure offers being handed out by the Saudi-backed tour. Barkley recently went so far as to say, “if somebody gave me $200 million, I’d kill a relative.”

While we won’t take Barkley at his word about killing a relative, it’s fair to assume he’s not about to worry himself with Saudi Arabia benefiting from slave labor, its complicity in the Sept. 11 attacks, or the 2018 killing of journalist Jamal Khashoggi. And as Barkley continues to be increasingly frustrated by marginal NBA players getting massive contracts, he appears to be someone looking to strike on a big payday, which LIV Golf can definitely offer.