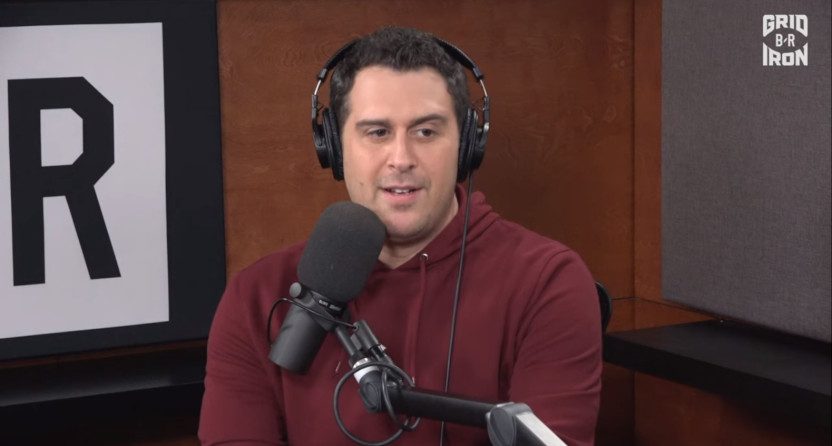 NBA on TNT Tuesday is set to begin its third season Tuesday, but with a slightly different cast. Host Adam Lefkoe and analysts Shaquille O’Neal and Candace Parker all return, but Jamal Crawford is sliding in as another analyst in place of Dwyane Wade. Ahead of this NBA on TNT Tuesday season (which begins Tuesday night at 7:30 p.m. ET with a Oklahoma City Thunder-Miami Heat/Phoenix Suns-Golden State Warriors doubleheader), Lefkoe has signed an extension with WBD Sports. That extension will see him not just continue in that Tuesday role, but also continue his work with NBA TV and Bleacher Report. Lefkoe spoke to AA recently on that, and said he’s excited to continue building what he’s been doing with this company.

“I’m honored, thrilled, and grateful. I’m coming up on a decade with Bleacher Report and Turner Sports and now WBD Sports. The last time I extended my contract, it was very much them taking a chance on me and moving me from mainly digital to broadcast with the Tuesday show. And I felt a big, almost a responsibility, to do right by them. And to now have done three seasons for the show, to have won two Emmys, to almost feel like we got to look at each other and say ‘It worked,’ and now we get to take this to the next step. I’m so grateful, and I’m so excited, because I think we started building something great, and now I get to see it through.”

“From Tara August, who heads talent, who’s been such an important person to me for so long, Craig Barry, Scooter Vertino, Lenny Daniels, who just left, but he’s been such a person I could talk to over the years, Tina Shah, and now Luis Silberwasser, I’m so grateful to them. It is such a family over there, and now being accepted into that family and being seen as somebody that can kind of help guide it, I’d run through a brick wall for those people.”

Lefkoe spoke to AA in 2019 around his last extension, which saw him discussing the plans for NBA on TNT Tuesday and how he wanted to bring digital elements into that show. There, he said the goal was “How do I bring what I’ve learned in digital and add it to a traditional broadcast, how do we make moments, how do we take the style of an online broadcast, which is more community-building and more about reacting to engagement, and work with the people at TNT and Turner, who are so great at what they do, to even change that up a little bit.” He said now he’s been happy with how that’s gone to date.

“We won back-to-back Emmys in the category of outstanding interactive experience, so now that you’re reading that quote back to me, I actually have kind of a great sense of pride. Because when I sit down with the producers, whether that’s Keith Robinson or Jeremy Levin, who I love, we ask a few questions, or at least, I make sure we do. One, we’re the show of record on Tuesday nights, so what do we have to discuss? That’s first and foremost. The second one is ‘How do we entertain?’ But the third one, going back to what I said to you before, is just ‘How do we break through that wall of TV and social?'”

“And it’s getting to work with people like Ann Lutzenkirchen, who does a lot of the social media. We spend a lot of time talking about ‘What are people on Twitter talking about, what are they sharing on TikTok, what are the big posts on Instagram, and how do we share that on TV, not just by telling people what we think, but by getting the conversation going?'”

“And what I love about our show is that if people disagree with us online, we will share it on TV that night and address it, and we have the space and time to do that. I’m really proud, because the Tuesday show, we are younger, and we’re very open to having discussions with our fans and breaking down that fourth wall. And to me, it’s the only way to do this job. The only way to do this is to be constantly interacting. So thank you for reading that, because now it feels like it kind of came full circle.”

Chemistry has also been a big focus for the Tuesday show, with both Lefkoe and WBD Sports EVP/chief content officer Craig Barry talking about that in 2020. The chemistry is going to change a bit with Wade exiting and Crawford entering, but Lefkoe said it should still be strong, especially given Crawford’s past work with him, Parker, and O’Neal.

“Me and Dwyane and Candace and Shaq, we legitimately were there for eight to 10 hours hanging out and having fun, and it was amazing. I still ask Dwyane for family advice, I talk to Candace about her new son, Shaq and I are just sending memes to each other, so that friendship is there. The good news is with with Candace and the WNBA, when it would start, Jamal got a lot of opportunities to fill in last year, and it was effortless. He would sit out there with me and Dwyane, and Shaq would tell stories about the first time he saw Jamal’s handle and was blown away.”

“I’ve become really fast friends with Jamal, and we got to do a lot of NBA Twitter Live together, and you’re doing an entire game sitting there and just spitballing. And the thing that I love about Jamal is that he watches every single game and he is a basketball junkie. He coaches his children, I’m constantly sending clips back and forth with him, and he’s already had a chance to work with Candace on NBA TV.”

Lefkoe said part of the adjustment for him will be figuring out how to maximize Crawford’s contributions.

“He’s a basketball junkie, I’m a basketball TV junkie, so I’m constantly watching the way they interact and how to get the best way out of them. Dan Patrick gave me the advice a few years ago that my job is to be a point guard, and if I leave the game with five points but get 15 assists, that’s a great game. I think in the beginning there’s always going to be an adjustment, but Dwyane and Jamal are great friends, and I know that Dwyane is really proud of Jamal and Jamal is really excited to kind of take the baton. I think it’s figuring out where his sweet spot is so that when I tee him up, he can be the best version of him. But I think that with him and Candace we have two of the best very granular basketball minds in this business, and then with Shaq of course, we have, in my opinion the most entertaining man in television.”

In addition to NBA on TNT Tuesday, Lefkoe is continuing with NBA TV and Bleacher Report. He said angles he wants to explore there more include gambling content and social media content integration.

“The sports landscape has been forever changed by betting. Every time you turn it on, there’s an ad, everywhere you look. I think it’s leading to a more informed and interesting discussion of the game. And I think the NBA actually lends itself more to this discussion more than any sport, because it’s on almost every night. I like finding the ways to use analytics, I love weaving social media in. I love doing the NBA Twitter show with Taylor Rooks when that gets going later in the year; her and I have now worked together for about six years, and that relationship on camera is something we really have fun doing.”

He said Bleacher Report has been such a big part of his story, and he’s thrilled to keep working there as well, especially to continue to connect with a younger audience.

Lefkoe said he feels his career’s gone through several different stages to date, and he’s excited about what’s ahead.

“The local news stage was me learning how to be a professional. The Bleacher Report stage really was finding my voice. The first three years of the Tuesday show was seeing if I could bring digital to broadcast. And now I feel I’m ready for the next step of that evolution, which is me reaching my potential as a broadcaster.”

He said he thinks he’s come a long way, but has a long way still to go.

“I watch tape of myself, and I believe that I could be one of the best to ever do it. And I’ve had mentors like Ernie [Johnson] who I’ve learned from not just watching him and being around him, but also how to live off-air, and how to treat people with respect and love and empathy. I’ve had people behind the scenes, the production staff, that when I have a crazy idea, they execute on it. And now for me, it’s about getting out there, having the control, and continuing to make the show the best basketball show that’s ever existed. I want to put that pressure on me, because I think I have that potential.”

“I really think I’m my toughest critic. But I hope in 10, 20 years, people look up to me and go ‘Man, that Lefkoe guy’s been doing this a long time.’ I care about consistent excellence. And that’s the mindset that I’m in.”

NBA on TNT Tuesday broadcasts begin Tuesday, Jan. 10 with a Thunder-Heat/Suns-Warriors doubleheader, with the first game at 7:30 p.m. ET.