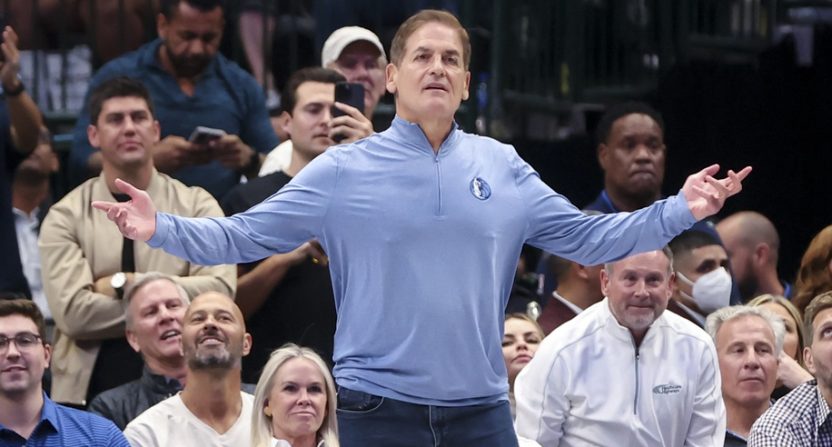 The changes to Twitter under new owner Elon Musk have already prompted debate on how the sports media world may be impacted. Some of those impacts have already been seen with the change allowing anyone to get a checkmark (formerly reserved for verified accounts of notable people or outlets) for $8 a month, which has further upped Twitter’s already-significant impersonation problem. And Dallas Mavericks‘ owner/Shark Tank star/billionaire entrepreneur Mark Cuban (seen above during a Nov. 2 Mavericks’ game) is not a fan, tweeting Wednesday night he thinks this could be particularly disastrous around the NBA trade deadline:

@elonmusk, from one entrepreneur to another, for when you have your customer service hat on. I just spent too much time muting all the newly purchased checkmark accts in an attempt to make my verified mentions useful again. Hope this helps.

This ain't it @jason. You definitely democratized everyone's contributions. But you killed the most valuable part of Twitter, the ability to quickly and easily find information from sources I have chosen to trust. Think NBA trade deadline. This will be a NIGHTMARE https://t.co/CccNVs6tBF

The “You killed the most valuable part of Twitter, the ability to quickly and easily find information from sources I have chosen to trust. Think NBA trade deadline. This will be a NIGHTMARE” in that second tweet really stands out. That’s strong language from Cuban. And it’s understandable why he has that take.

Cuban has had a lot of opinions on the media world over the years, and some of his stances have taken deserved criticism. But it’s tough to argue with him on this one. The sports world in general and the NBA world in particular has long had a problem with amplifying information from impersonation accounts or accounts looking to make points by having media fall for fake news, even from accounts literally called “Ballsack Sports.” That account got its own checkmark Wednesday, and then spent time illustrating the problems with the new policy:

Basically have to cancel your subscription on your account, subscribe to twitter blue on another account on your phone app, and then cancel that, make the changes to your name you want, then re-subscribe. pic.twitter.com/kwKEyqIFoq

You got Burger King workers coming off a run at 24 hour fitness hopping on twitter with a blue checkmark acting like they in the league ???

Josh Allen has been ruled OUT Sunday vs the Vikings with a grade 3 penile fracture. pic.twitter.com/jyj0dTlAoi

This is still very early in Twitter’s rollout of its new checkmark approach, so there’s a good chance a lot of this could change by the next NBA trade deadline (on Feb. 10, 2023 ). There’s also a chance Twitter itself is far different by that point, and maybe it’s no longer a go-to source for sports news at that time, in which case these changes won’t matter as much.

But Cuban is absolutely right about the potential perils for breaking news situations around this new Twitter approach, as those Ballsack Sports tweets help to illustrate. And that’s especially true in a league like the NBA where so much of that news (especially around trades and free agency, and including reactions from players) first happens on Twitter. And Cuban is also quite right about the diminishing value seen so far with verified-only results, whether in replies (often quite necessary for massive accounts like Cuban’s; he has 8.8 million Twitter followers) or in searches. He pointed that out in a response to a new-checkmark account Wednesday:

No disrespect to you , but I used to go through 100 tweets in my verified mentions. People who were curated by Twitter. Now it's 2x and growing quickly. Did you find any value from following blue check accounts ?

And beyond the issues for searches and replies, the impersonation and false news-spreading accounts seem like an even larger problem. And that’s especially true for news, and in the sports landscape, that might be particularly important in the NBA. We’ll see if this does wind up being the trade deadline “NIGHTMARE” Cuban predicts.