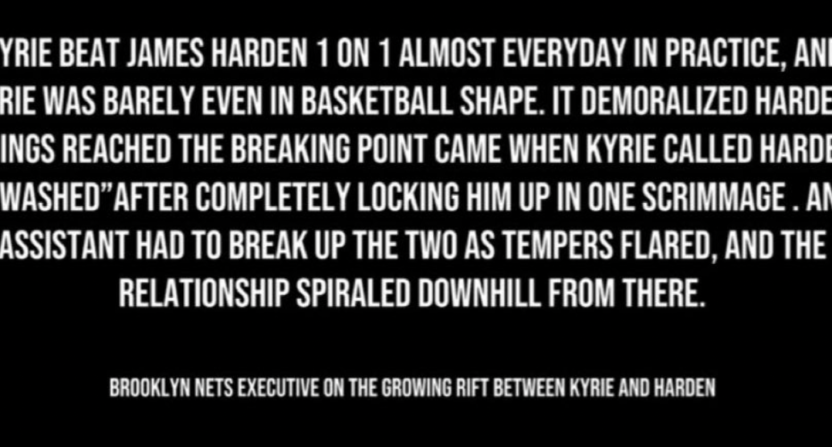 At some point, we have to contend with the fact that a Twitter account called Ballsack Sports continues to trick mainstream media companies with fake quotes and what that says about us as a society. Until then, just remember to keep your head on a swivel when watching ESPN because you never know when one of their on-air talents will be telling you a completely made-up anecdote courtesy of the fake news source.

For background, Ballsack Sports is a Twitter account run by a 24-year-old man from Akron, Ohio who started it “to rile up as many people as possible under the most obscenely obvious satirical name.” The quality graphics, which feature fake quotes from famous NBA players that straddle the line between believability and absurdity, broke through in the public consciousness in January when Philadelphia 76ers President of Basketball Operations Daryl Morey namechecked it during a radio interview.

And every few weeks since, it seems like another sports media entity that should know better falls for one of these tweets.

Last Friday, ESPN analyst Kendrick Perkins was discussing the Brooklyn Nets’ dominating win over the Philadelphia 76ers on Thursday night, noting that Kyrie Irving’s performance changed his opinion of the Nets guard. As part of the discussion, Perkins mentioned a specific anecdote involving Irving and James Harden during Brooklyn practices.

“All those rumors and stories that we heard about Kyrie and James Harden in practice with the Nets, and Kyrie going at him. Guess what? Kyrie showed us last night that those were facts and that was true!” Perkins said.

What rumors, you might ask? What specific story about Kyrie going at Harden in practice? Turns out, those rumors and stories come from a Ballsack Sports tweet on February 10 featuring a fake quote from a “Brooklyn Nets executive.”

Kyrie Irving and James Harden got into “brief” physical altercation after Kyrie called the 32 year-old superstar “Washed” during one scrimmage. pic.twitter.com/zx7hXolipO

While it’s true that there was a report published by The Athletic on the same day outlining drama between the two former teammates, there is no mention in that article of any altercations during basketball practice, nor does the quote about Irving calling Harden “washed” appear in the piece.

Not to be outdone, Stephen A. Smith was on NBA Countdown on Saturday discussing the Sixer-Nets game when he too seemed to reference the made-up practice story.

I sacked Stephen A Smith ???this is getting ridiculous. I’ve infiltrated ESPN

“So all of this noise that you hear about what may have transpired in practice between the two, I dismissed it,” said Smith.

That brings us to Monday evening and an episode of SportsCenter. In discussing the return of Tom Brady from retirement, the anchor added an anecdote concerning LeBron James and how the NBA star played a role in getting Brady to unretire.

“Tom Brady is back,” said the SportsCenter host. “Now who would have thought that it would have taken a text message from LeBron James and a hat trick from Cristiano Ronaldo to convince him, you know what…”

Another day on ESPN. 3 days straight. “Who would’ve thought it would take a text from LeBron James to convince Tom unretire”
?@spognea pic.twitter.com/lzDVYfmBLi https://t.co/ARM6dkGcMI

The Ronaldo part checks out as Brady met with the Manchester United star the day before announcing his retirement. As for the LeBron text, we’ll let you guess where that came from…

Again, there is some plausible confusion here as LeBron did post a message on Instagram about Brady’s return, but that came after the announcement was made. Based on the way it was said on ESPN, it’s clear that they’ve taken the Ballsack Sports quote and run with it.

You can make the case that what makes the Ballsack Sports quotes so easy to misidentify as truth is that they are well-timed to appear in lockstep with the actual news or reports. And perhaps some leeway should be provided because of that. Also, we’re just going to note that the LeBron-Brady tweet has almost 17,000 retweets and over 141,000 likes, so shame on everyone here, not just ESPN.

But honestly, it’s fair to ask the largest sports media entity in the country and others like it to at least practice some basic fact-checking and journalistic fundamentals, especially when discussing stories on this scale. Say what you will about ESPN’s debate shows and hot take factories, but you should expect everything discussed on their networks to be vetted for general accuracy. They should at least have a better confirmation system than your favorite team’s blog (which, honestly, probably has a really good track record on these kinds of things).

Again, the name of the quote source is Ballsack Sports.

For a third time and just in case you somehow missed it, the quote comes from something called Ballsack Sports.

Today we will focus on the dangers of misinform in the media, and stress the importance of media literacy.

Social media and the internet has enabled users to create and spread misinformation at record rates.

Not everything you see on internet or social media will be real. pic.twitter.com/8FM0JAd0NJ

“I don’t want to be, you know, the guy that’s traced back to a misinformation spread for all the wrong reasons,” said Matt, who runs the Ballsack Sports account, in an interview with Awful Announcing. “That’s my end goal. To not get picked up by Fox News. To not get picked up by Sports Illustrated. I think there’s some websites that will deliberately pick me up to get that clickbait attention, but my end goal is to hopefully help stop what I’m doing.”

Apparently, we’re still in the process of achieving that goal. We probably shouldn’t rely on the Twitter account doing the fake quotes to be the ones to also get us and ESPN there. But here we all are.