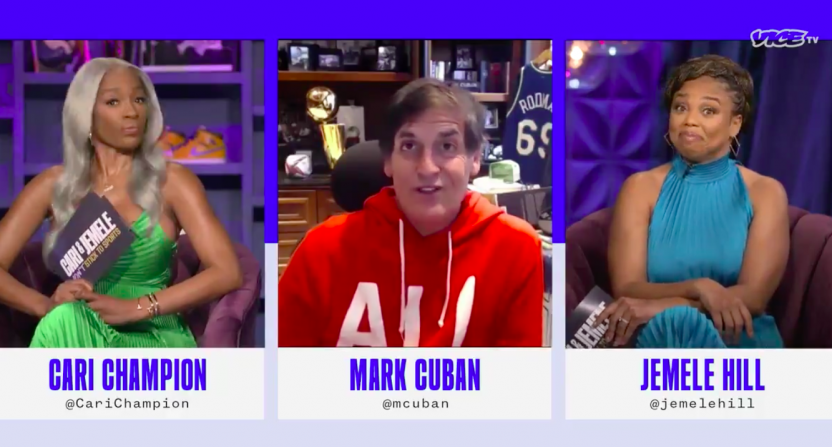 On a recent episode of The Lowe Post podcast, ESPN NBA analyst Zach Lowe spoke with reporter Tim MacMahon, who covers the Dallas Mavericks for ESPN Dallas. The crux of the discussion was about the Dallas Mavericks but there some specific attention paid to star player Luka Doncic and his burgeoning reputation for being a bit of a whiner. In fact, Lowe even went as far as to say that Doncic is among the league’s whiniest whiners that ever did whine (paraphrasing).

“Luka has become one of the biggest whiners in the NBA. It’s constant, every time he drives he is whining. He spent so much energy whining to the referees and slumping his shoulders to teammates, it sucked the life of the team many times.”

McMahon also noted that Doncic tends to showcase poor body language during games and wastes too much energy complaining to referees and officials.

The criticism also comes as Doncic is putting up great stats (27.3 points, 9.4 assists, 9.0 rebounds, and 1.1 steals per game), but the Mavericks are struggling, taking a 9-14 record into the weekend, just barely out of the Western Conference basement.

The Mavs are, of course, owned by Mark Cuban, who tends not to mince too many words when it comes to his team and players. So when Cuban appeared on Vice TV’s Cari & Jemele (won’t) Stick To Sports and was asked about Lowe’s comments, the word-mincing certainly didn’t start now.

here's the clip of mark cuban telling zach lowe "fuck you, you don't know shit" in response to lowe talking about luka being one of the whiniest players in the league toward the refs. pic.twitter.com/GOttOiXe50

“I’ll tell you exactly what I think. Fuck you, Zach Lowe. You don’t know shit. You know? It’s just…I know Luka, right? He’s not a big whiner. He’s passionate. He cares. He wants to win…He’s not a whiner, he’s a baller.”

There does seem to be plenty of validity to what Lowe and McMahon were saying but Cuban is, of course, going to defend his star player, especially at a time when the knives are starting to come out for him. Also, Doncic is just 22 and has a ways to go in terms of experience, maturity, and learning how to balance being a superstar with being a team leader. Cuban surely sees the forest for the trees and knows he needs to back his guy now, even if there is something to the reputation he’s got.

It’s not like Lowe is some cub reporter who is just spouting hot takes, he knows his stuff. And there are plenty of other people saying the same thing about Doncic right now. But this feels a bit more like Cuban making a political move in defense of his guy rather than the start of a blood feud between an owner and a member of the media.