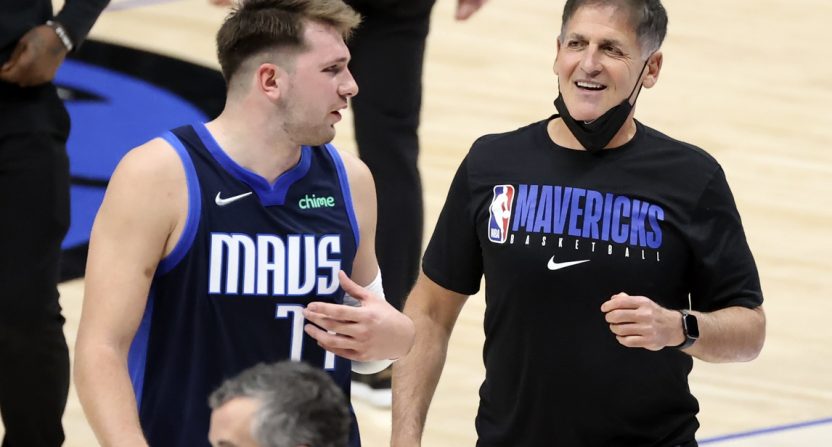 On Monday morning, The Athletic published an article by Tim Cato and Sam Amick about the Dallas Mavericks front office and the team’s relationship with Luka Doncic.

Bob Voulgaris has been the most influential voice in the Mavs’ front office since being hired: initiating transactions, dictating rotations, and even frustrating Luka. There are internal fears how it could affect Luka's future.

The article details the role of Haralabos Voulgaris in the team’s front office, his impact on the team, and Doncic’s relationship with Voulgaris and other members of the Mavericks organization.

Mavericks owner Mark Cuban didn’t seem thrilled with the article, calling it “total bullshit” on Twitter in the hours after it dropped.

He followed it up by tweeting several “100” emojis and saying Cato “didn’t reach out to me till just before the opinion piece was published.”

???which is why the writer didn’t reach out to me till just before the opinion piece was published. And I never spoke to him till after it was posted i conveyed the facts to him then https://t.co/56lMBelEGV

Voulgaris declined both an Athletic interview request (noted in the column) and a later comment on Sunday, and Cuban’s quotes are noted as being from Monday (presumably, from the time after the article went live as opposed to beforehand).

When reached for comment on Monday, Cuban defended Voulgaris’ involvement. “I really like what Bob brings to the table. He does a great job of supporting Rick and the front office with unique data insights.”

Cuban added: “Bob has a great grasp of AI and the opportunities it creates for gaining an advantage. Which is important to me. But he isn’t any more influential than any other data source on the team.”

To be fair to both sides here, there’s no chance that Cuban would see this article and tweet something like “yeah, things here are shaky and Luka might leave.” Of course he’s going to defend his team! It’s also worth noting that in his tweets or his quote, Cuban didn’t say anything about Doncic’s relationship with the team, possibly giving credence to The Athletic’s reporting.

Speaking of that reporting, it’s not black or white, and it doesn’t need to be. Many news stories aren’t, and people use those shades of gray to cast doubt on the entirety of the reporting. Sure enough, the article in question notes (at the end, and people *never* read to the end of an article) the relationship between the team and Doncic is “healthy” and that it hasn’t turned sour yet.

Doncic has a healthy relationship with the Mavericks organization at large. League sources say he angled to be drafted by the team in 2018, and he has been particularly complimentary of his relationship with Nowitzki, whose final season coincided with Doncic’s first. Those feelings could change if the team’s postseason struggles continue, as the Mavericks haven’t advanced past the first round since their 2011 championship run. It’s not that Doncic’s situation with the team is at a critical inflection point right now. Multiple team sources simply fear that it’s heading that direction.

“Things are not bad, but could be if they keep going along this track” isn’t a sexy summary, but it can be true, leaving Cuban annoyed by what he seems to feel is an overly negative tone, even though the story is truthful.

In short, it’s understandable that Cuban is annoyed, and Cato and Amick’s reporting can also still be accurate despite that annoyance.