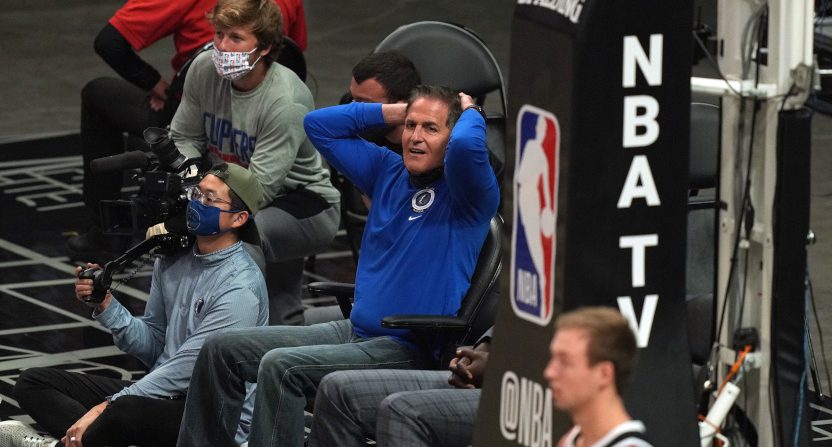 Monday saw The Athletic publish a piece from Tim Cato and Sam Amick titled “Inside the Mavericks front office, Mark Cuban’s shadow GM is causing a rift with Luka Doncic,” focused on the surprising power held by Haralabos Voulgaris. Voulgaris, a former sports gambler, is titularly the team’s director of quantitative research and development, but that piece describes him as “the most influential voice within the Mavericks front office,” from organizing and approving draft choices and trades to scripting rotations for head coach Rick Carlisle, and discussed conflicts between him and star Luka Doncic.

Shortly after that piece was published, Cuban (seen above during the Mavericks’ Game 7 first-round loss to the Clippers) called it “total bullshit” on Twitter and complained about the limited time he was given to comment. But a lot’s happened since then; actual titled general manager/president of basketball operations Donnie Nelson was fired Wednesday, and coach Rick Carlisle resigned Thursday:

Rick Carlisle — who led Dallas to the 2011 NBA championship — informed Mavericks owner Mark Cuban today that he won't be returning as coach next season, Carlisle told ESPN. Carlisle had two years left on his contract. He spent 13 seasons as Mavericks coach.

For the record, here are Cuban’s actual tweets from Monday:

???which is why the writer didn’t reach out to me till just before the opinion piece was published. And I never spoke to him till after it was posted i conveyed the facts to him then https://t.co/56lMBelEGV

(The tweet he’s responding to there has been deleted.)

When reached for comment on Monday, Cuban defended Voulgaris’ involvement. “I really like what Bob brings to the table. He does a great job of supporting Rick and the front office with unique data insights.”

Cuban added: “Bob has a great grasp of AI and the opportunities it creates for gaining an advantage. Which is important to me. But he isn’t any more influential than any other data source on the team.”

And yet, in the days after that, Nelson and Carlisle are both now gone. And while the Mavericks’ release on Nelson called it “a mutual decision to part ways,” Amick and Cato reported that Nelson was fired Sunday. So Cuban’s “total bullshit” comments on an article that partly discusses Nelson having issues with being undermined by Voulgaris seem a little much, especially with him knowing at that point that Nelson had indeed been removed. And Carlisle’s decision to leave following Nelson’s exit seems to add more to the “not bullshit” column.

This doesn’t necessarily mean that Voulgaris is taking over. As per the ESPN story on Carlisle from Adrian Wojnarowski and Tim McMahon, the Mavericks will now hire a new president of basketball operations, then a new head coach, and they’ve hired Mike Forde’s Sportsology consulting firm to help in the president of basketball operations search. So it could wind up being someone with previous GM experience. As noted in the initial Athletic piece, too, Voulgaris’ contract is up this summer, so it’s not even certain he’ll be back. A new Athletic piece from Cato and Amick published Thursday discussed what might be ahead there:

Voulgaris’ contract expires this summer, and his continued employment with the team remains uncertain. When asked about the matter Wednesday evening, Cuban told The Athletic he “won’t talk about individual deals. Never do.” But it’s expected any continued role would be the same he has held.

Voulgaris never angled to usurp Nelson as the formal leader atop the front office’s organizational chart, team sources say, a role involving constant conversations with other executives around the league as the main figure for transactions which doesn’t fit his analytical strengths. But as his influence grew within the organization, perceptions around the league began to shift toward him gaining authority. From Nelson’s perspective, lines were clearly crossed.

That piece also contains a specific example of Voulgaris crossing a perceived line in trade talks, and Cuban’s response to that:

As one rival team executive shared Wednesday, there were times when talking to the Mavericks about trade possibilities meant inevitable confusion. Nelson would paint one picture, so to speak, discussing the possible pieces and players involved in an attempt to get a deal done. But Voulgaris, who this rival executive said had talked to his team simultaneously about a particular deal, would tell a different story. And because Voulgaris was widely known to have a direct line to Cuban, this dynamic was seen by Nelson as damaging to his credibility. When asked over the phone about this assertion on Wednesday, Cuban refuted the idea that Voulgaris had negatively impacted the process.

“At multiple levels of the front office, multiple people have ongoing conversations,” Cuban said. “Scouts, assistant general managers, anybody and everybody. Player development people, everybody (has) conversations with people in other organizations to get information and find out what they’re up to, just like they have conversations with Donnie.

“We have people top to bottom with other teams and other teams have conversations with us. We take input and that goes into all of the final decision-making. But that’s no different than (any other) team. … And no one has any more influence because it comes down to us agreeing on it. Or me agreeing on it. That’s just how it works. And only Donnie initiated trades.”

If Cuban decides to maintain that structure, which seems to place significant limits on the power of the GM, that may limit the candidates the Mavericks are able to hire. At any rate, there certainly were conflicts within the front office, and many of them did seem to center around Voulgaris. So the “bullshit” tweet doesn’t seem to be holding up too well.

And as per Doncic, the initial Athletic piece was measured in its ultimate takeaway there, citing specific conflicts with Voulgaris but also concluding with “Doncic has a healthy relationship with the Mavericks organization at large. …It’s not that Doncic’s situation with the team is at a critical inflection point right now. Multiple team sources simply fear that it’s heading that direction.” And Thursday’s piece said that Doncic still intends to sign a supermax extension he’s eligible for this summer. But it also included this:

“Doncic told reporters at a Slovenian national team press conference held Thursday that it was difficult to hear about Nelson’s departure, who sources confirm he held a good, long-standing relationship with since meeting him as a teenager. “But I’m not the one making decisions,” he said.”

The big question going forward with the Mavericks is who, below Cuban, actually will be the one making decisions. But from a media perspective, much of the initial reporting from Cato and Amick is looking pretty good right now, and certainly not worthy of a “total bullshit” pushback from the owner.