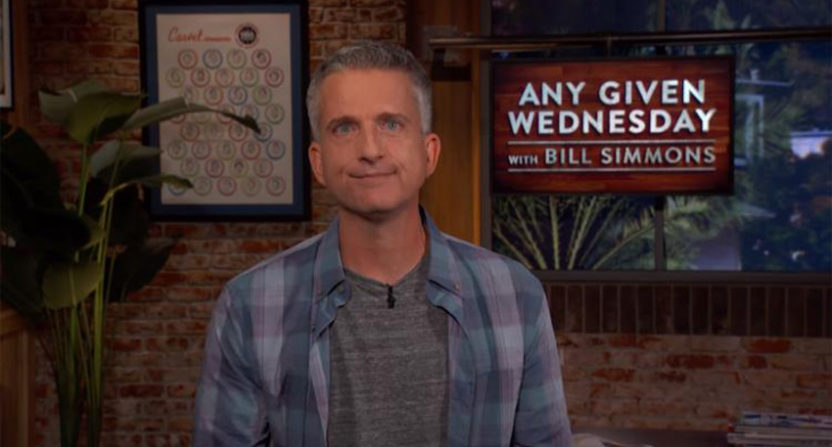 Recode’s Peter Kafka recently sat down with The Ringer’s Bill Simmons for a Recode Media podcast around Simmons’ 1,000th edition of his namesake podcast. Kafka wrote up some of the highlights of that conversation, and while some of them cover familiar ground like Simmons’ exit from ESPN (he’s still salty about learning about his contract not being renewed in The New York Times, saying ESPN did that “because they were being dicks,” despite his own admission to the man who made that decision that he likely wasn’t coming back), something that’s a little less well-trodden is Simmons discussing why his Any Given Wednesday show on HBO only lasted five months. Simmons has some notable comments there about that show originating from his podcast interviews, about the amount of editing that went into making interviews fit in a tight TV window, about how he feels podcasts are stronger than those particular kinds of TV interview shows, and about how he’s still interested in doing documentaries (a long-time focus for him), but not TV.

The film stuff has been something that I’ve spent a lot of time on and I do feel like we’ve created something really cool. I think we’re a player in that space. From the TV side, I just didn’t like it that much.

I look back at what happened with the [HBO] show, and there’s a million things I would do differently, but ultimately I went into that show with the mindset of “these interviews I’m doing on my podcast are really hitting. people love them. This should work as a TV show.” But the reality is podcasts have replaced shows like that. And I think by 2017, I realized that.

I had Kevin Durant on the [podcast] the first time in 2017. It was probably like three or four months after my [HBO] show got canceled and we went to this restaurant, we just talked.

Back then, it didn’t feel as normal to just have one of the best players in the world sit down for an hour and 20 minutes and just record it. And we ended up doing, I think, six [interviews]. But that first one, that was when I realized: “This is just better than [TV].” Because I had him on my TV show. We did a really good segment — me, him, and Nas — that we edited into, I don’t know, 12 minutes, but we went for 40. And the 40 raw minutes were better than the 12 edited minutes. So stuff like that made me think, “What is the upside at this point of a TV interview show versus a podcast?”

There’s a lot of context to consider here. Podcasting has undoubtedly worked out better for Simmons than TV (whether that’s Any Given Wednesday, NBA Countdown, or The Grantland Basketball Hour), so he comes into this with some bias. And much of Simmons’ success in both written and podcasting mediums has come from long pieces or interviews, and it certainly can be easier to do that in those mediums.

However, it should be noted that there have been longform feature interview shows on TV as well, with many of those in the news realm, but some sports examples including Undeniable and In Depth With Graham Bensinger, to say nothing of more conversation-centered shows like The Shop and The Arena. Just because the format of Simmons’ show had him doing 40-minute interviews and editing those down to 12, that doesn’t mean that’s necessarily a requirement for TV. (That also doesn’t mean that that kind of editing is always bad. No viewer has unlimited time. If there are only 12 minutes of notable content, that’s better for many than a 40-minute interview with lots of filler.)

But this does speak to a larger issue with Any Given Wednesday‘s weekly, quick-interview format not actually lining up with what Simmons really wanted to do. And this is the latest and fullest exploration of that. But Simmons has brought up some elements of that before, including in a December 2016 interview (so a month after the show’s cancellation) with Power 105.1’s The Breakfast Club, which also featured discussion of the Nas and Durant interview.

“My whole attitude is, I’m really glad I tried it. I learned a lot. I would do 100 things differently. But it’s on to the next one. If you have a 40-year career, you’re not gonna do everything perfectly…We just gotta figure out the next thing.

[HBO has] been great. I love the HBO family. There’s a bunch of things I would do differently. I think the biggest thing is, I thought the show, in retrospect, I wish it’d been monthly. I think it’s really hard to do a weekly show and just pop in and out and be like ‘here’s my take.’ Cause the way the sports cycle goes, with that 24/7. You know, on Monday morning, everyone’s banging podcasts, all those FS1, ESPN shows. Everyone’s got the take on whatever and I don’t know how you just parachute in on Wednesday and have a take that’s greater than everyone’s take.

“The thing with me is I really want to do an interview show and that’s what I was passionate about. And we did some stuff on that show that I thought was really cool. I don’t know if it should have been every week but, like, we had Nas and [Kevin] Durant together for a half-hour. It was fucking awesome. I love that.

“So, I think there was a show that would worked within what we did but it was too late. Once you stumble, it’s really hard to get it back. It’s almost like a football season.”

Later in that 2016 interview, Simmons also talked about TV versus podcasts, saying “I didn’t want to come back to Countdown for the second year” and “I love doing the podcast. I love doing the longform stuff.” So this medium commentary lines up with what he’s said before. But even with his bias, there is a point here; Simmons notes to Kafka that there hasn’t been a really successful late-night interview show launch in some time. It’s not that podcasts have completely replaced the standard shorter interview shows, but some in-depth interviews certainly are gaining traction, especially on podcasts. And Simmons has an interesting note here about the importance of video podcasts and how Spotify plans to incorporate that video into their main app. Maybe that will provide the kind of “TV” content in a format and subscription style that does work for him.

Another notable point from Simmons here is how interview podcasts are getting tougher, though. As he tells Kafka, in the early days of The B.S. Report, many of his guests not only weren’t podcast hosts or regular podcast guests, they weren’t familiar with what podcasts were. So that meant he “was really just competing against Marc Maron and that was it” (for long-form interview guests). Now, he says “I feel like anybody who is ever going to be a guest on a podcast would have done a podcast by now,” and he’s probably not wrong there. And with many of those people (like Draymond Green and maybe even LeBron James) now making their own podcasts as well, it’s tougher to a. get them on and b. get anything new from them. That has Simmons saying he’s pivoting to more reactions rather than interviews. We’ll see how that works out for him.