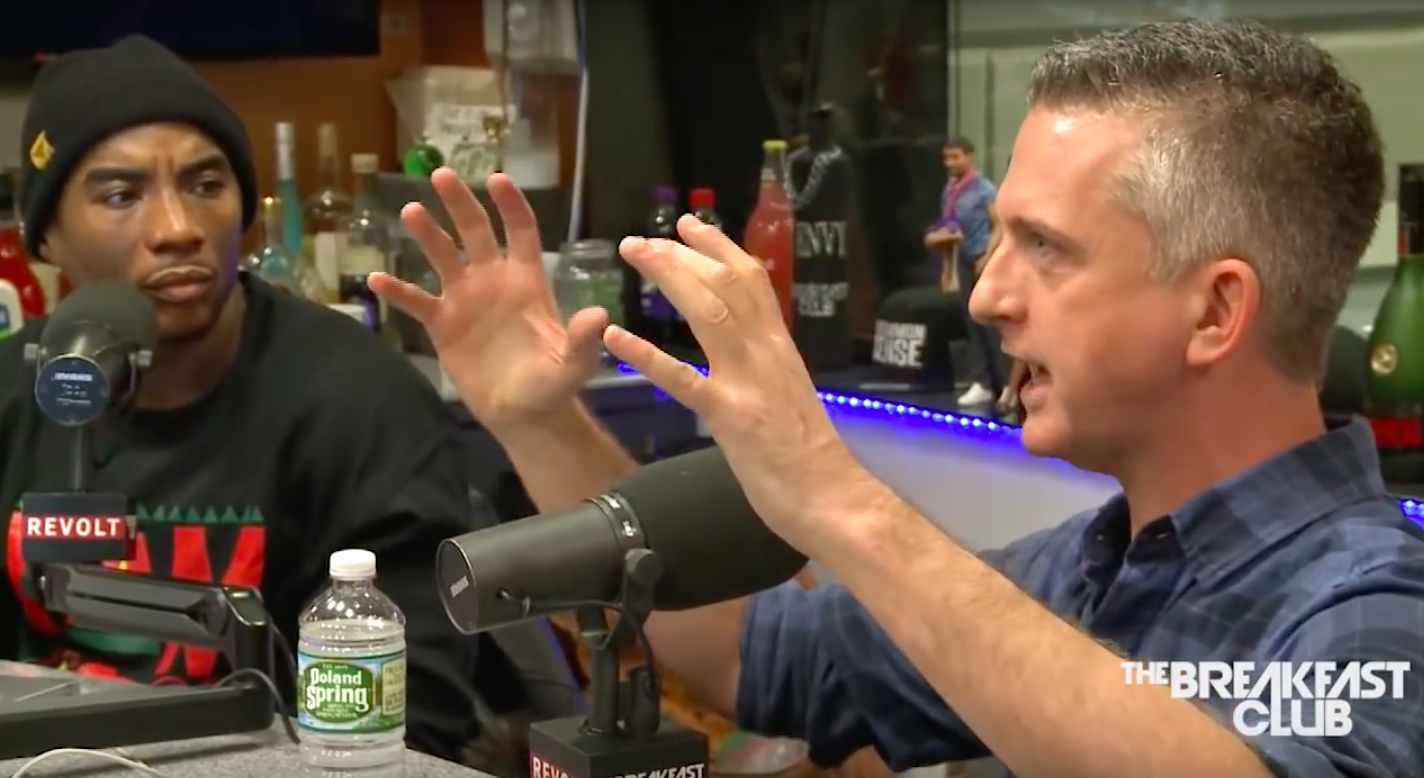 Ever since HBO cancelled Any Given Wednesday after just five months, Bill Simmons has kept a relatively-low profile. He’s still going about his business on Twitter and on his podcast, but he hasn’t opened up too much to talk about what went wrong and what might be next for him.

Simmons finally provided some insight into his side of things during a recent stop to The Breakfast Club, Power 105.1’s morning show in New York City. It’s an almost hour-long, free-flowing sports conversation but along the way they discuss what went wrong for AGW, what Bill would have done differently, whether or not he’s got TV talent, and what his relationship is like with ESPN these days. We parsed out some highlights below.

“I love it. I totally support what Kaepernick did. The problem with Kaepernick is the more he said and did, the more it made you go ‘hmm…I don’t know if this guy has a master plan.’ The fact that he didn’t vote I thought was really strange. If you’re going to position yourself as this 2016 version of John Carlos and Tommie Smith…how do you then say I’m sitting out the election?”

On Isiah Thomas, who threatened Simmons in 2006:

“I used to make fun of him as the Knicks GM, and rightly so…I met him in Vegas. He was playing blackjack at one of those European places where you’re outdoors, you’re out by the pool, and the girls can be naked but it’s never anyone you want to see naked…I ran into Gus Johnson…he came over and he was all somber, he was Somber Gus Johnson, not the Gus Johnson you want. He was like ‘Hey man, Isiah’s over there, uh, he wants to talk to you.’ I’m like, alright. Get up from my blackjack table, we go and have this meeting by this topless pool…We kinda broke bread, he laid out, like, I get it, I’m a public figure. And he remembered everything I wrote, which I thought was weird…I was surprised by how much he paid attention to it.”

“The O.J. thing. We always used to talk about O.J. Week. The original idea was Tyson Week…But around 2012, Tyson started doing stuff. He was very available…we learned too much. My idea for Tyson Week was take five points of his life. I always thought the most fascinating part of his life was the Robin Givens part.

Once that didn’t happen, we started talking about O.J. Week. The original thing was supposed to be three parts. But by the time I left, Ezra [Edelman] was working on it…I thought that was amazing. I hope it wins the Oscar.”

On why people wanted to see Any Given Wednesday fail and what went wrong:

“I think isn’t that part of all this stuff? When you have some success with anything, I think, at a certain point people are like ‘fuck this guy.’

“My whole attitude is, I’m really glad I tried it. I learned a lot. I would do 100 things differently. But it’s on to the next one. If you have a 40-year career, you’re not gonna do everything perfectly…We just gotta figure out the next thing.

[HBO has] been great. I love the HBO family. There’s a bunch of things I would do differently. I think the biggest thing is, I thought the show, in retrospect, I wish it’d been monthly. I think it’s really hard to do a weekly show and just pop in and out and be like ‘here’s my take.’ Cause the way the sports cycle goes, with that 24/7. You know, on Monday morning, everyone’s banging podcasts, all those FS1, ESPN shows. Everyone’s got the take on whatever and I don’t know how you just parachute in on Wednesday and have a take that’s greater than everyone’s take.

“The thing with me is I really want to do an interview show and that’s what I was passionate about. And we did some stuff on that show that I thought was really cool. I don’t know if it should have been every week but, like, we had Nas and [Kevin] Durant together for a half-hour. It was fucking awesome. I love that.

“So, I think there was a show that would worked within what we did but it was too late. Once you stumble, it’s really hard to get it back. It’s almost like a football season.”

On whether or not critics are right in that his talent doesn’t translate to TV:

“They might be right, my show just got cancelled.

“I thought we did some good stuff on the NBA show, especially the first year. I think a lot of depends on what the vehicle is…I didn’t want to come back to Countdown for the second year. It was brutal to do that show. It was 55 times a year. You’re getting up at 6:30 on Sunday morning to do the 9:30. You’re on the road for five weeks. I didn’t want to do it and they all lobbied for me to do it again.

I don’t know. I love doing the podcast. I love doing the longform stuff. I think with a half-hour weekly show, especially, and I knew this going into it, you have to be a performer  You just have to. Look at all the people that succeed in it. It’s all people who are like these characters. Even someone like Sam Bee, who I think that show’s great. She’s a performer. Or like [John] Oliver. Oliver can stare at the camera for 40 minutes and just do this thing.”

On his relationship with ESPN now:

“It’s not great. It’s really not a relationship but I don’t think it’s as acrimonious as it was. Really weird shit happened the last couple years. I guess when you have some distance from it and you look back, you go ‘Oh, I get it, I understand why that happened.’ But in the moment…

“You take something like when they got rid of Wilbon [from ESPN’s NBA Countdown]…because the PTI rating were going down and they felt he was too split between the two shows. And PTI is their biggest show. They just got rid of him and they went and got Doug Collins. Magic [Johnson] took it really personally. Magic was owning the Dodgers at that point…he was like ‘Fuck it, I don’t want to do this…’ So when he left, a lot of the reason that he left was because they handled the Wilbon thing so badly and he loved Wilbon. You just saw he and Wilbon got back together on the Saturday show. And then some people in Bristol tried to plant that I was the reason…that it was a power struggle with him. I was like, ‘Where the fuck is this coming from?’ And I’d never even met Doug Collins, so stuff like that happens and you’re working for a company and they’re planting stuff to make you look bad, that’s when I was like ‘Man, this is not a good place.

“All I did was try to do good shit for them. You look at Grantland and 30 for 30 and all the different places that I worked for and everybody got along great, even at my TV show. It’s weird, ESPN is a place that they never want anybody to get their own little fiefdom of power, basically. They want the brand to win. I do think I hit a point there when I had Grantland and 30 for 30, and at the same time I was on the NBA show, I definitely had a lot of power. And I was in LA and you’ve people in Bristol who are like, ‘Fuck this guy.’