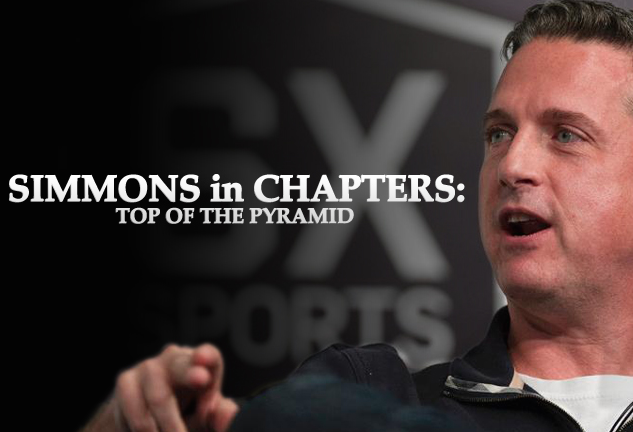 And now, Chapter IV: Top of the Pyramid:

As discussed in Chapter III, things were looking pretty good for Simmons by the end of 2011. He’d expanded his role at ESPN well beyond just columns, branching out with great success into podcasting and the 30 for 30 series. He had reached #1 New York Times best-seller status with The Book Of Basketball, and he had become much more influential than rival Rick Reilly both inside and outside Bristol. He was sufficiently important to the Worldwide Leader that he managed to make getting his own personality-driven site, Grantland, a condition of his contract renewal. While Simmons had carved out his own ESPN empire across many different mediums, though, his TV presence on the main network (and the respect, both external and internal, that comes with that) was still quite limited. Within a year, that was about to change; Simmons was set to move from being just the top player in his own empire to performing under the brightest spotlight at ESPN, a regular role on the main TV network.

ESPN’s October 2012 decision to add Simmons and Jalen Rose to their primary NBA pre-game show, NBA Countdown, was notable for both what it said about the network and what it said about Simmons’ status within Bristol. For starters, it made Simmons one of an exceptionally rare breed on sports television; a guy in a primarily-analytical role on a pre-game show who wasn’t a former professional athlete, and a guy who wasn’t even a long-time print columnist. That showed that ESPN was willing to try some new things on-air, and that boded well for Simmons and others without professional playing experience; it suggested there was less of a hard ceiling on what their on-air roles could be. Beyond that, it allowed Simmons to finally get a regular on-air presence on the main network. That may seem like a small distinction given how big Simmons’ empire had already grown, but it certainly mattered within ESPN. Consider what Chris Berman said about Simmons in the 2011 ESPN history Those Guys Have All The Fun:

“I don’t know Bill Simmons. I wouldn’t know him if he sat here right next to me. I’m not knocking him, because I know he’s important to the company, but that’s some other limb of the tree that I don’t touch.”

Berman’s attitude towards and lack of knowledge of Simmons likely wasn’t universal amongst on-air talent, but there’s plenty to suggest that there’s still a significant divide between ESPN’s TV operations and other corners of the Bristol empire. Simmons had boldly carved out new swathes of empire for ESPN, helping to make them a worldwide leader on the dot-com, podcasting and documentary fronts, but that wasn’t enough to win everyone over. Now, he was being given a more established, high-profile position within the main network, one that was much harder to downplay as “some other limb of the tree.”

It’s notable that ESPN management had tried to make this happen earlier. Richard Deitsch reported when the move was announced that Bristol leadership had made Simmons Countdown offers before, but that the timing wasn’t right with his Grantland launch and other activities. Thus, even though Berman and his ilk weren’t high on Simmons, that opinion wasn’t reflected at the top levels of management, and the desire to have him as part of the TV empire was strong. Given Simmons’ love for and knowledge of the NBA, Countdown seemed like a logical place to put him, and it seemed like a way to expand the joint empires of The Worldwide Leader and The Sports Guy.

Empires don’t expand forever, though, and the issues that arose with Countdown illustrated some of the problems that were to come between ESPN and Simmons. Some of these weren’t his fault; the show was still trying a “hostless” approach in 2012-13, and that led to discussions that often flowed poorly. There were also major chemistry issues, which we’ll get to later. It’s interesting that despite the 2012-13 struggles, though, management still believed in Simmons as a Countdown figure; in fact, they doubled down on him. Deadspin’s John Koblin reported that the changes to the show ahead of the 2013-14 NBA season (the addition of Doris Burke, Magic Johnson’s abrupt exit and a lessened role for Michael Wilbon) were to make it more Simmons-centric:

So, why did Magic make his sudden announcement that he’s leaving ESPN, less than three weeks before the NBA season begins? An announcement so sudden that the newest addition to NBA Countdown, Doris Burke, appears to have had no idea it was going down?

ESPN sources tell us that Johnson’s departure was the result of an old-fashioned power war, with one very clear winner: Bill Simmons. “It’s Simmons’s show now,” said one source.

Magic apparently was not at all happy when ESPN told his buddy Michael Wilbon that his role on NBA Countdown would be diminished. He was “booted,” according to one source. Another ESPN insider also said that Magic was “privately seething over the Wilbon thing and in general did not like that Simmons held all the power and influence.” Magic didn’t necessarily need the power, our sources explained; he just didn’t feel like kowtowing to Simmons when he’s, well, Magic Johnson.

“The bottom line is they turned that show over to Simmons,” said our source. “That’s why Doug Collins got hired and why Wilbon was out.”

And that’s a very large part of why Johnson decided to bolt the show at the 11th hour. …

Now, the show belongs entirely to Simmons. He’s losing star power with Magic Johnson’s departure, but he’s not necessarily losing a key component of a studio show that had a much-improved but still uneven 2012-2013 season. ESPN said it’s still “determining our NBA commentator roles for the upcoming season.” Simmons will be able to get a proper host in for the show. He’ll be able to shape it however he wants.

Such is his power now at ESPN. “The shadow president,” a source called him.

Whether that’s an accurate reflection of what went down is disputed (Simmons vociferously denied any involvement in Johnson’s exit in an interview with Deitsch), but it certainly indicates the power Simmons was at least perceived to have and the desire of ESPN management to feature him on the main network. It also shows ESPN didn’t mind courting some controversy, as this was after Simmons’ run-ins with Doc Rivers surrounding the 2013 NBA Draft.

Rebuilding the show around Simmons also had some potential; the chemistry of the previous group was lacking, and creating something with at least some overarching vision seemed like a step up. Simmons himself built a whole book around the thesis that basketball is about chemistry and teamwork more than individual talent, and the 2012 iteration of Countdown didn’t have that chemistry. As 2013 was ending, ESPN was trying to find that chemistry with a new show more focused around their franchise player.

It’s worth mentioning that Simmons was finding success in other areas while Countdown drama was playing out. Grantland grew from humble beginnings to an important and influential site, and it brought in some top talent, including SI’s Zach Lowe. The 30 for 30 series continued to shine after the initial run of 30 documentaries, first under the label of ESPN Films Presents (which created a major branding issue), and then as a “second season” of 30 for 30-labeled films once they realized viewership and critical reception was dropping without that label. Meanwhile, Simmons’ own columns and podcasts remained vastly popular.

Thus, betting on Simmons as a television star as well made sense; everything else he’d done at ESPN had worked out. With 2013 ending, he looked like perhaps the biggest face of the network going forward, certainly online but also with podcasts, documentaries and now regular TV appearances.

How did he go from there to a suspension that could prove the tipping point in his relationship with ESPN and potentially pave the way for an exit? We’ll discuss that in our final installment.