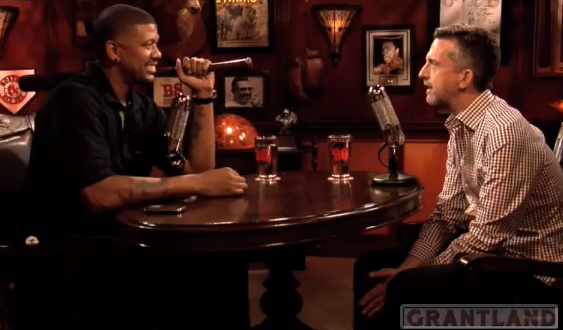 ESPN's decision to bring in Bill Simmons and Jalen Rose (replacing Chris Broussard and Jon Barry, joining holdovers Michael Wilbon and Magic Johnson) for their NBA pregame show is certainly a bold move. ESPN went bold last year with the move to Los Angeles for their NBA pregame show and "hostless" experiment, which was ultimately a failure as ESPN has brought wide-ranging changes after just one year. Simmons in particular is an unconventional addition; he obviously has a huge fanbase from his ESPN columns and best-selling Book of Basketball, running Grantland, and from his recent work with the Worldwide Leader's 30 for 30 documentaries.

However, he's not a former player or coach, and that makes for an extremely rare and refreshing change from your typical analyst. Meanwhile, Rose has plenty of playing credentials from his time at Michigan and his 14-season NBA career, but throughout his ESPN work, he's consistently demonstrated a willingness to be much more outspoken than your typical player-turned-commentator, and has even shown he's not afraid to take on (and destroy) favoured types like Skip Bayless. Will adding these guys make for a good show? A lot depends on how they approach it.

From a blogosphere standpoint, the move to Simmons is both impressive and irritating. Yes, it's fantastic that a major network has shifted away from the paradigm that only former players and coaches can serve as analysts and has gone with someone who's got a solid blogging background. On the other hand, they've chosen Bill Simmons. Simmons certainly has his fans, and few would argue that he's got a substantial amount of basketball knowledge (his Book Of Basketball is a pretty impressive publication, whether you agree with his conclusions or not), but just within the ESPN family, there are so many knowledgeable basketball bloggers like Henry Abbott, Kevin Arnovitz and Tom Haberstroh that could do so much with a wider profile (to say nothing of the great basketball bloggers spread over the rest of the Internet).

Now, that's not to say that Simmons is consistently terrible or that he's doomed for failure in this spot. Even those of us who don't enjoy reading him regularly and don't particularly like his Celtics homerism or the repetitive patterns he's fallen into (references to terrible 90s TV shows and much more) would concede that he can make solid points from time to time. No one denies this. Also, while not everything on Grantland is great, he's brought some pretty good stuff there (and built an impressive audience in the process).

Moreover, whether Simmons will work out as a pregame analyst largely depends on him. If he relies on the arbitrary power rankings, rules of fandom and obscure pop culture references that fuel much of his work lately, the feeling from this corner is that it's not going to go all that well. Simmons is capable of much more than that, though, as anyone who used to read him back in the day knows. There's an insightful mind under all the easily-mockable stuff, especially when he's talking about the NBA, and if he brings that to the table, he could be a great addition here. That's not to say that he shouldn't go for humour or should try and switch his style to uber-serious analysis only. It's just that there has to be some substance as well for him to thrive in this setting. Viewers cannot live by 90210 references alone…

Rose is much less of a risk, and his ESPN profile has been on the rise lately. In addition to regular stints on Numbers Never Lie (a show which has its problems, but does seem to be pulling in viewers), he's expected to take a more prominent role in ESPN's college basketball coverage this year, and he's quickly become a recognizable ESPN personality. What makes him stand out is his candour; Rose never seems to be filtering his comments to preserve friendships or avoid lightning-rod moments. Of course, there are perils to that path too, something Rose's old adversary Bayless has demonstrated. What's worked for Rose thus far is that he's taken strong stands that seem to be what he really thinks versus merely shouting loud debate points. It's not an easy line to walk, though, and it's going to be interesting to see how he does it.

While these additions by ESPN are somewhat bold, they certainly aren't going all the way. Rose is more outspoken than your traditional ex-player and Simmons doesn't have the typical analyst background, but these are still both very known names, and they're more lightly stretching the envelope than really pushing it. Maybe that's what's required right now: TNT's Inside The NBA is a dominant opponent, and perhaps ESPN figure names like Simmons and Rose might get people to at least look elsewhere.

Whether it's going to actually compete with the quality of TNT's presentation will largely depend on the approach and the preparation Simmons and Rose bring to the table and the on-set chemistry between the new quartet. Then again, the previous iteration of Countdown didn't work, so perhaps there's nowhere to go but up?