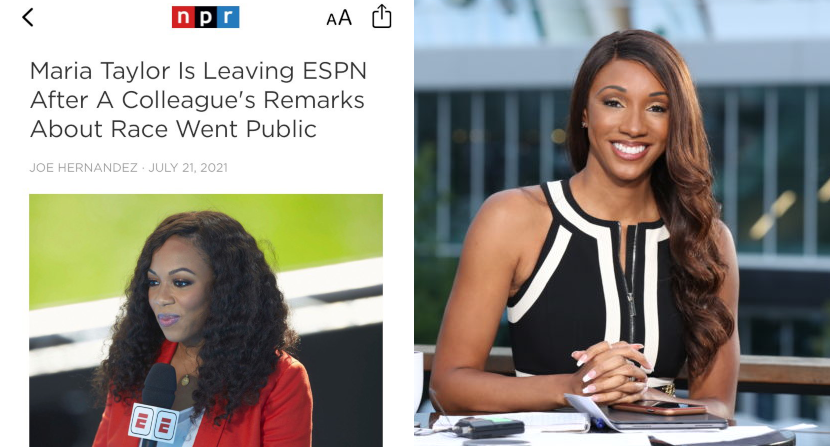 Photo identification mixups happen, but NPR committed a particularly bad one Wednesday. Like everyone else, they reported on Maria Taylor leaving ESPN. However, they accompanied that with an Associated Press photo of ESPN NFL reporter Kimberley A. Martin (as shown at above left), with a caption erroneously identifying her as Taylor (seen at above right). And Martin took notice:

I promise you, @NPR … That’s *not* Maria Taylor. It’s me. pic.twitter.com/DLIXW9SGSL

The full caption there indicates that this is an AP photo, so it may have been the AP caption at error. (And if so, this may have happened at other sites as well, as many sites run exactly what the AP sends out.) It wouldn’t be the first time a photo database mistake led to a large error. It’s also unclear if this happened on NPR’s main web story or just their mobile/app version; as of 2 p.m. Eastern Wednesday, the main web version had a correct photo.

At any rate, this is a particularly notable mixup. Taylor is regularly on national television, including on this week’s NBA Finals coverage on ABC. And it’s surprising that an outlet covering her departure wouldn’t recognize that this wasn’t a photo of her. So this certainly wound up as a bad look for NPR.

Because of an error in an AP caption, this post previously featured an image of ESPN reporter Kimberley Martin instead of Maria Taylor. We apologize for the error.