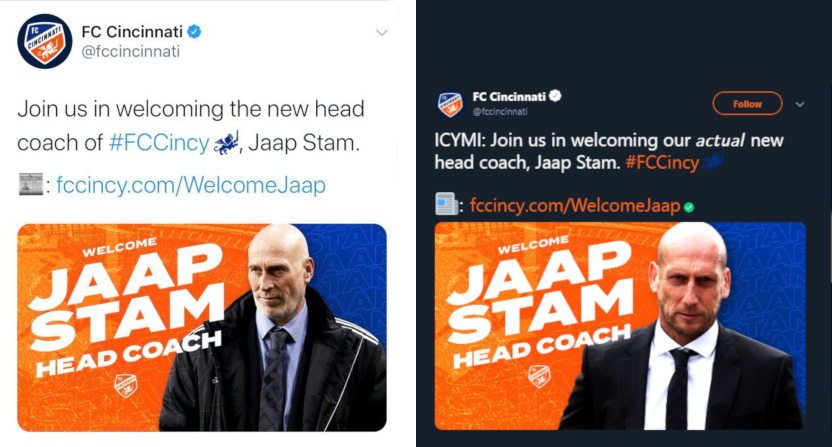 It apparently can be difficult to tell bald white men apart, as a whole lot of media outlets found out in 2018 when they ran a mislabeled photo of then-Chicago Bears’ offensive coordinator Mark Helfrich in stories about Bears’ head coach Matt Nagy. The latest case of this is with MLS’ FC Cincinnati, which announced Thursday that they’d hired former Dutch international defender and former Feyenoord manager Jaap Stam, but did so with a photo of Ajax youth manager Tinus van Teunenbroek:

As Nick Bromberg writes at Yahoo Sports, though, the fault here appears to be with Getty Images’ labeling (or with the labeling they picked up from VI Images, which originated the photo):

The mixup can be easily explained, however. Stam is still in Europe and has not arrived in the United States to officially join the team and meet the staff according to the team’s release announcing his hire. His introductory news conference on Friday will be via Zoom.

And whoever thought they were adding a picture of Stam to the graphic picked the photo from Getty Images. The 2013 picture of van Teunenbroek in a game between Ajax and Heracles Almelo identifies him as Jaap Stam. Here’s the original photo and caption below.

Jaap Stam of Ajax during the Dutch Eredivisie match between Ajax Amsterdam and Heracles Almelo on November 23, 2013 at the Amsterdam Arena in Amsterdam, The Netherlands.(Photo by VI Images via Getty Images)

But that didn’t stop FC Cincinnati from getting roasted on Twitter, even after they corrected their graphic. And one of the accounts roasting them was a fellow MLS team:

Yes, Jason Statham is not the head coach of FC Cincinnati (although that might be cool). And neither is Patrick Stewart:

But hey, at least this led to some Twitter fun, and to FC Cincinnati’s coaching announcement getting more attention than it might have otherwise.