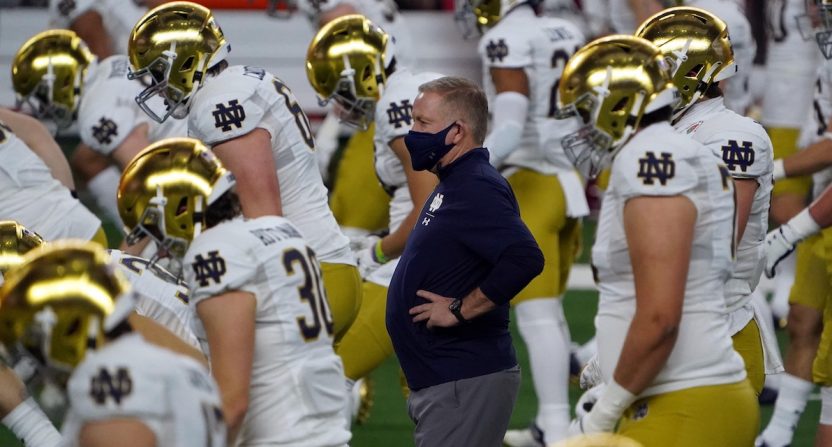 Notre Dame’s Fighting Irish TV streaming service is off to a promising start. Early returns have been so encouraging that the school is considering a subscription option that could launch later this year or early in 2022.

Total numbers for Fighting Irish TV have not been released, but according to Sports Business Journal, the service generated more than 58,000 minutes of viewing on its first day following Notre Dame’s pro day. Debuting in April, programming included highlights and interviews from workouts, in addition to longer-form features on the players displaying their skills for NFL scouts and evaluators.

Compare that 58,000 minutes figure to the 32,000 minutes of viewed content for Notre Dame’s YouTube channel in March and you can see why school athletic officials are encouraged.

A new 2017 home game drops every Friday for you to stream exclusively on Fighting Irish TV.

Calling it for “Netflix for Notre Dame,” Fighting Irish TV offers a Netflix-like menu of content. But instead of movies and TV shows, viewers can choose among highlight shows categorized by sport. In addition to archived home football games (going back to 1991) and event clips from various sports, the service also includes documentary-style content such as Lou Holtz being hired as football coach in the 1980s and an interview show hosted by athletic director Jack Swarbrick.

Fighting Irish TV is currently available to download for free through Apple TV, Android TV, and Amazon. But the service’s success so far has officials thinking about a subscription model. How much a subscription would cost hasn’t yet been determined. But Notre Dame is definitely looking at the platform as a revenue source that can generate money beyond advertising.

As you could expect, the success of Fighting Irish TV has also drawn the attention of other schools looking to develop a similar platform for their athletic programs, many of whom have devoted, diehard fanbases equally, if not more, ravenous for content than Notre Dame fans. The Streamable mentions Clemson as one of those schools, and the Tigers could launch “Clemson+” (working title) as soon as this coming football season.