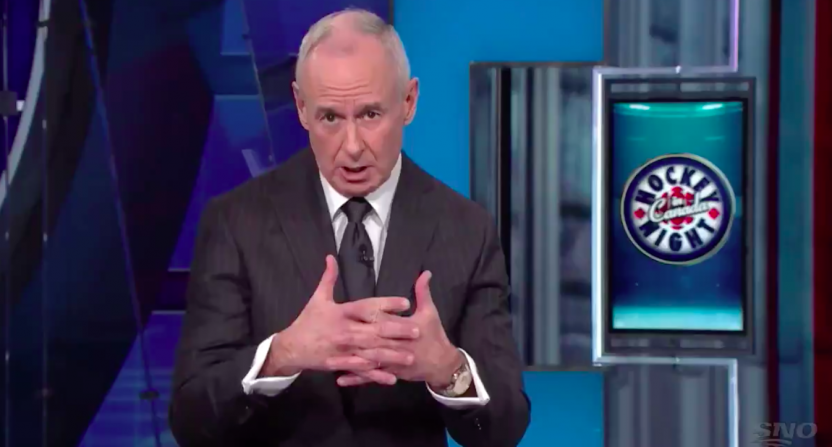 On Friday, former NHL player Sean Avery showed up on fubo Sports Network‘s Drinks with Binks to talk about a few different topics, including Don Cherry’s firing from Sportsnet. Avery defended Cherry, saying, “I don’t believe Don Cherry is a racist man,” and disagreed with the decision to fire him from Hockey Night in Canada. Later on in the conversation, Avery discussed some potential replacements for Cherry, including himself, to stand alongside Ron MacLean in the Coach’s Corner segment that’s run since 1982.

Turns out the discussion of who would be a good replacement for Cherry is moot as Ron MacLean announced on Saturday night that Coach’s Corner would be ending.

“Coach’s Corner is no more…We will never do anything in the first intermission of Hockey Night in Canada.”

“We’re taking the time to explore new formats for the first intermission,” Sportsnet communications director Andrew Garas said in an email to The Canadian Press on Friday.

What stands out so much in the segment is not that MacLean announces Coach’s Corner is over, but the rest of the monologue. Attempting to straddle the line between paying homage to a man who is considered a Canadian national treasure and recognizing the actual reason Cherry was fired, MacLean ends up giving more of an elegy for his former co-host than any kind of apology. As for how that makes you feel it probably depends on where you stand on Cherry’s initial comments to begin with.

“[This] doesn’t mean anything in terms of my respect for you…We honor what you’ve meant to the game. To the fact that you’ve been there for human beings. For sentient beings. Just [a] fantastic human being. And so I love you very much and we honor you tonight in this last talk about a Coach’s Corner.”

MacLean did provide some context about how things played out following Cherry’s comments, in which he suggested Canadian immigrants benefit from the sacrifices of veterans but don’t show respect by wearing Remembrance Day poppies. (Comments that Cherry has not apologized for).

“I felt so bad and I apologized immediately. And Don, you know Don, defiant,” MacLean said. “There were steps that needed to be taken because of what had been said by Don. And he didn’t want to do those steps. So he made his choice and I made mine.”

MacLean also talked at length about his close relationship with Cherry but said he had to choose “principle over friendship.”

The reaction to MacLean’s monologue was mixed on Twitter, to say the least.

That Ron MacLean segment on HNIC might have been the most scattered apology and statement I've ever heard. I have no idea what that was.

I suppose Twitter will offer every shade of opinion on @RonMacLeanHTH comments tonight. It must have been so difficult for him. I think we saw the best of Ron. Candid. Humble. Likeable. Now, back to Hockey Night in Canada.

Ron MacLean's bit on #HNIC was underwhelming at best.

He will be vilified by the pro-Cherry camp, and be lauded by the regulars who just want their hockey show back for being "a decent guy".

Hockey freezes hurt into history. But the rest of us will keep doing what we do.

Ron MacLean: Not a single mention of racism, xenophobia, or any of the people harmed by the bigotry he helped promote to icon status over the past 35 years. Instead, an apology to, and elegy for, Don Cherry. Ron should hang ‘em up.

Regardless of where hockey fans stand on Cherry, his firing, the reaction, MacLean’s apology, Cherry’s non-apology, and the rest, there will be plenty of eyes on HNIC next week to see what they do in lieu of Coach’s Corner, officially, for the first time since 1982.