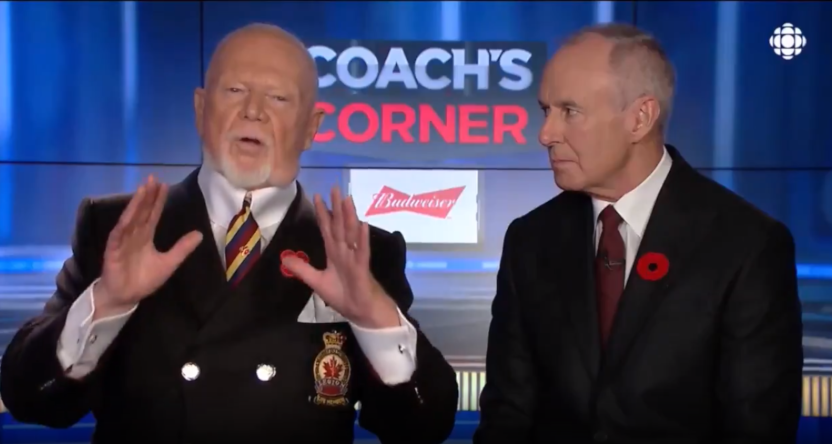 It appears that Don Cherry has finally said something controversial enough to lose his job. While the immediate response from Canada’s Rogers Sportsnet Sunday after Cherry’s Coach’s Corner intermission rant Saturday about immigrants supposedly not buying Remembrance Day poppies was a muted “We have spoken with Don about the severity of this issue,” Monday saw that escalate into Rogers parting ways with the 85-year-old Cherry, according to multiple reports:

BREAKING- @CoachsCornerDC has been fired by @Sportsnet – story to come.

Yes @CoachsCornerDC has been fired by @Sportsnet – story soon. Including an interview with Don Cherry who is quite hurt they would do this on Remembrance Day of all days.

Don Cherry is no longer with Rogers/HNIC

This came after Cherry’s segment Saturday where he said he’s seeing less people wear poppies (a British Commonwealth Remembrance Day tradition with ties to the World War I poem “In Flanders Fields,” written by Canadian doctor John McCrae), and where he specifically criticized immigrants:

ICYMI here's Don Cherry being a POS by shaming immigrants for not buying poppies pic.twitter.com/kwTugoZGI6

Those comments from Cherry created incredible backlash, with so many complaints submitted to the Canadian Broadcast Standards Council (the regulator that plays a similar role to the U.S.’ Federal Communications Commission in governing on-air Canadian TV) that the organization put out a statement saying they couldn’t accept any more:

The CBSC has received a large number of very similar complaints concerning Coach’s Corner broadcast on CBC (Sportsnet) on November 9, 2019, exceeding the CBSC’s technical processing capacities. Accordingly, while the CBSC will be dealing with this broadcast under its normal process, it is not able to accept any further complaints.

Cherry’s comments also drew widespread condemnation in media outlets from The Globe and Mail to The Athletic to The Toronto Star, with many of those pieces calling for his removal. And Coach’s Corner co-host Ron MacLean (who had taken plenty of criticism himself for not challenging Cherry on these remarks), apologized both on-air and on Twitter Sunday:

I have worked with Don for 30 years, and we both love hockey. But last night, I know we failed you. I see hockey as part of what unites us. I have the honour of travelling across our country to celebrate Canada's game, and our diversity is one of our country's greatest strengths.

Update: Warmington has published his interview with Cherry, and Cherry is standing by his remarks.

“I have just learned I’ve been fired by Sportsnet for comments made on Coach’s Corner Nov. 9,” Cherry told me in a phone interview. “No problem.”

Cherry added: “I know what I said and I meant it. Everybody in Canada should wear a poppy to honour our fallen soldiers.”

…Cherry said he was just expressing how he feels about the lack of people donning poppies.

“I speak the truth and I walk the walk,” he said. “I have visited the bases of the troops, been to Afghanistan with our brave soldiers at Christmas, been to cemeteries of our fallen around the world and honoured our fallen troops on Coach’s Corner.”

…Cherry said he would change none of it.

…“To keep my job, I cannot be turned into a tamed robot,” said Cherry.

Still, he admits, being fired on Remembrance Day does hurt “because I would have liked to continue doing Coach’s Corner. The problem is if I have to watch everything I say, it isn’t Coach’s Corner.”

This is just the latest controversy Cherry has gotten into over his years in broadcasting. Following his playing and coaching career, he joined the CBC in 1980 as a guest analyst and in 1981 full-time, first as a game analyst (which saw him removed over excessive homerism) and then with intermission show Coach’s Corner beginning in 1982 (first with host Dave Hodge, then with MacLean beginning in 1986). And he’s stirred the pot quite a lot there, with remarks like wondering if Winnipeg Jets’ assistant coach Alpo Suhonen’s name was “a kind of dog food” in 1989, blasting the Canadian government for not joining the Iraq war in 2003, claiming “Europeans and French guys” wore the majority of visors in 2004,  blasting “left-wing kooks” and “cuckaloos and left-wing pinkos” in 2010 and 2018 respectively, and going after female reporters with “I don’t believe women should be allowed in the male dressing room” in 2013. (And those are just some of the particularly controversial ones, which doesn’t even cover bizarre feuds like his “bunch of jerks” criticism of the Carolina Hurricanes.) But it now seems that Cherry has finally said something to prompt enough outrage to get him removed.

(Why was this move made by Rogers rather than the CBC? Well, Cherry’s intermission program aired on the CBC broadcasts of Hockey Night in Canada,  but the CBC’s NHL coverage has been sublicensed from Rogers and editorially controlled by them since 2014. Cherry and many other ex-CBC figures were hired by Rogers at that point. So Rogers was his employer at this point, not the CBC. And now, it looks like he won’t be on any Rogers or CBC platform going forward.)